Before Houston Astros pitcher Cristian Javier graced the mound at Citizens Bank Park on Wednesday night, he spoke to his mother and father back in the Dominican Republic about starting in Game 4 of the World Series.

They had a prediction after Tuesday night’s loss: Their son was going to throw a no-hitter.

“Yeah, they told me last night,” Javier said after the Astros did just that: combine for a no-hitter against the Philadelphia Phillies to tie the series at two apiece with their 5-0 victory. It was the second time in World Series history that it’s ever been done, as New York Yankees legend Don Larsen threw a perfect game in the 1956 World Series.

Javier said his response to his parents was, “We’re going to stay positive, and with God helping us, we were going to do it.”

Consider Javier the most positive pitcher in MLB then.

The young right-hander had six no-hit innings going through 97 pitches, but manager Dusty Baker had seen this story play out before. It was on June 25 when Javier got the ball against the Yankees in the Bronx, and he lit up the stat sheet with 13 strikeouts and no hits through seven innings. The Astros’ bullpen would keep his no-hitter alive and combine for it when all was said and done in the 3-0 win.

Baker did the same thing this time around, pulling Javier instead of letting him go for history.

Bryan Abreu, Rafael Montero and closer Ryan Pressly shut down the Phillies’ lineup to stamp their place in MLB history, as third baseman Alex Bregman scooped up a short hop off the bat of J.T. Realmuto and fired it to Yuli Gurriel at first base to cap the historic night.

“We play for this and making it that special is that much better,” said Christian Vazquez, who was behind the plate catching for the Astros throughout the night. “It was special. Everybody did a great job and we’re happy we can split the series and finish home.”

Baker not only saw this play out in a Javier start months ago, but watched the late Roy Halladay complete the second postseason no-hitter in MLB history during the 2010 NLDS against the Cincinnati Reds – the team Baker was managing at the time. 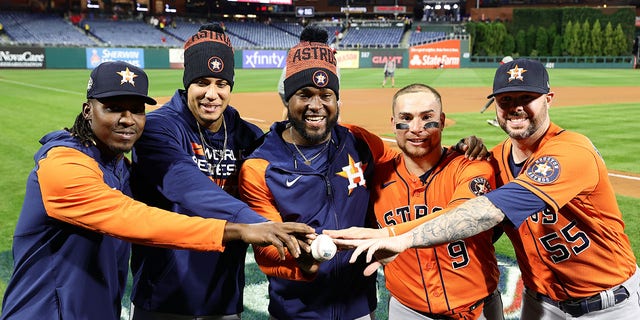 Rafael Montero #47, Bryan Abreu #52, Cristian Javier #53, Christian Vazquez #9 and Ryan Pressly #55 of the Houston Astros pose for a photo after pitching for a combined no-hitter to defeat the Philadelphia Phillies 5-0 in Game Four of the 2022 World Series at Citizens Bank Park on November 02, 2022 in Philadelphia, Pennsylvania. (Tim Nwachukwu/Getty Images)

Baker may not have said it directly, but the decision to remove Javier appeared to be based off how green he is in MLB and how late in the year it is to be pitching.

“We had a fresh bullpen, our guys are throwing good down there, and we figured that that was enough, especially this late in the year,” Baker said. “We had him around 100, we didn’t want to start him in that next inning. But boy, that was some way to win a ball game. The fans are psyched, our fans are psyched anyway. It brought back memories of when Doc Halladay no-hit us when I was in Cincinnati. I guess it was supposed to happen.”

Javier didn’t mind being taken out, as his only mindset was attacking hitters and going deep into the game. He did so using his “disappearing” fastball, as Baker called it.

“The one he had tonight, when I first met him, they told me he had a disappearing fastball. I’m like ‘there’s no such thing.’ But I guess so,” Baker said, as he watched Javier throw 70 fastballs of his 97 pitches. “This guy’s been doing it for us all year. It’s ironic that Cristian was pitching to Christian. We needed this game tonight to tie up the series.

“This guy made the team during that COVID year, 2020. We thought we knew what we had, but we really didn’t. His control was a little off at the time. He’s learned to control, he has a much better slider than he had been, and the sky is the limit for that young man.” 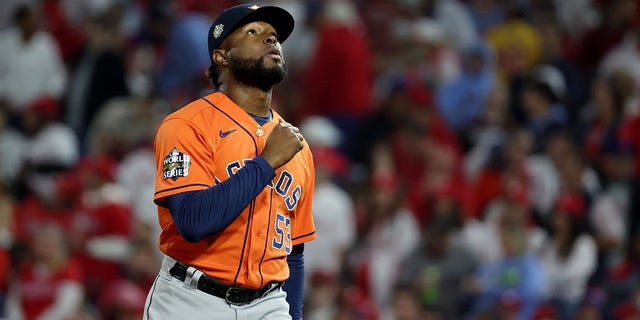 Cristian Javier #53 of the Houston Astros reacts after the end of the fifth inning against the Philadelphia Phillies in Game Four of the 2022 World Series at Citizens Bank Park on November 02, 2022 in Philadelphia, Pennsylvania.  (Al Bello/Getty Images)

The simple objective for the Astros Wednesday night after getting shelled by the Phillies in Game 3 was to just win and tie the series, so it could head back to Houston for at least a Game 6.

World Series history was the icing on top.