The Cincinnati Bengals took down one of two undefeated NFL teams, the Miami Dolphins, on their home turf Thursday night, 27-15.

But the Dolphins losing comes as a sort of afterthought after what transpired late in the second quarter.

A scary scene played out at midfield when Dolphins quarterback Tua Tagovailoa was wrapped up by defensive tackle Josh Tupou and thrown down for a sack, with the back of his head hitting the turf hard.

Tagovailoa appeared to be unconscious and was taken out of the stadium by a stretcher. The Dolphins delivered got some good news after the fact, as Tagovailoa was said to be conscious and had feeling in all of his extremities. He left the stadium in an ambulance with head and neck injuries.

The broadcast noted that Tagovailoa would be released from the hospital tonight and travel home with the team. The Dolphins later confirmed it.

This comes just a few days after Tagovailoa appeared to have suffered a head injury in the first half against the Buffalo Bills but returned and finished the game. Instead, they said he was dealing with a back injury that caused him to look woozy on the field.

Teddy Bridgewater would come in for Tagovailoa the rest of the game, and he ended up capping that drive at the end of the first half with a shovel pass to running back Chase Edmonds, who busted his way into the end zone to make it 14-12.

Joe Burrow led the Bengals on an opening drive touchdown, with Joe Mixon finding the end zone for the first time of the season. He’d been struggling to establish the run game, but his offensive line helped him out with a goal-line push that sent him in for six.

Then, he found wide receiver Tee Higgins for a 59-yard catch-and-run after he just got past the Dolphins’ top cornerback, Xavien Howard, down the left sideline. 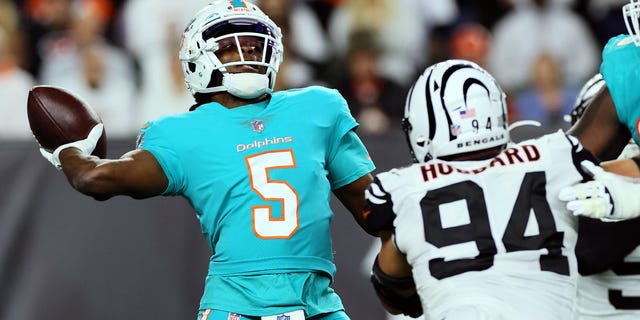 Quarterback Teddy Bridgewater #5 of the Miami Dolphins passes during the game against the Cincinnati Bengals at Paycor Stadium on September 29, 2022 in Cincinnati, Ohio. (Andy Lyons/Getty Images)

From there, it was a field goal battle. Both teams had chances to score in the red zone, but they couldn’t see it through. Evan McPherson was 2-for-2 on his field goal attempts, his longest a 57-yarder.

Jason Sanders went 3-for-4 on the night and missed an extra point on the Dolphins’ only touchdown to Edmonds.

The icing on the Bengals’ victory was an interception thrown by Bridgewater to Vonn Bell, who had two interceptions on the night, during a fourth-quarter drive with the Dolphins down, 20-15. They had a chance to take the lead with a touchdown run, but Burrow flipped the script after the turnover.

He found tight end Hayden Hurst on a short pass to give the Bengals the win.

In the end, Burrow passed for 287 yards with two touchdowns on 20-for-31, while Bridgewater went 14-for-23 for 193 yards with the touchdown and interception.

Tyreek Hill wanted revenge against Eli Apple, and he got some with 160 yards on 10 receptions. He couldn’t cap it off with a touchdown, though.

Tee Higgins was the leader on the Bengals’ sideline with 124 yards on seven receptions. Ja’Marr Chase finished with 81 yards on four catches. 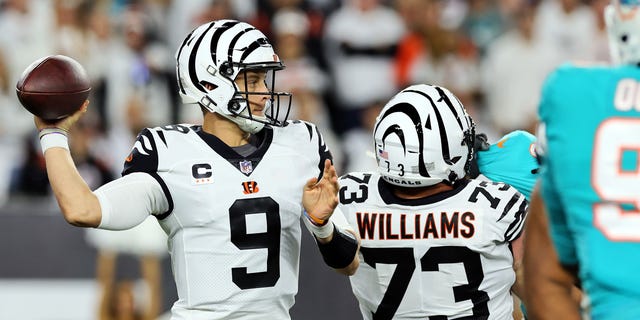 Quarterback Joe Burrow #9 of the Cincinnati Bengals passes during the 1st half of the game against the Miami Dolphins at Paycor Stadium on September 29, 2022 in Cincinnati, Ohio. (Andy Lyons/Getty Images)

The Bengals, now 2-2 on the year, got some extended rest before traveling to Baltimore to face the Ravens on Oct. 9.

Miami will determine what their quarterback situation will be on the same date, as they face their AFC East-rival New York Jets on the road.