Bills’ Damar Hamlin in critical condition after collapsing on field, game suspended for rest of night

Buffalo Bills safety Damar Hamlin was in critical condition after he collapsed on the field and needed CPR and an AED to be used on him before being rushed to the hospital.

The NFL announced it postponed the game between the Bills and Bengals.

“Hamlin received immediate medical attention on the field by team and independent medical staff and local paramedics. He was then transported to a local hospital where he is in critical condition,” the league said in a statement.

Buffalo Bills players react as teammate Damar Hamlin is examined during the first half of an NFL football game against the Cincinnati Bengals, Monday, Jan. 2, 2023, in Cincinnati.  (AP Photo/Jeff Dean)

“Our thoughts are with Damar and the Buffalo Bills. We will provide more information as it becomes available.

“The NFL has been in constant communication with the NFL Players Association which is in agreement with postponing the game.”

The NFL Players Association also released a statement on the matter.

“The NFLPA and everyone in our community is praying for Damar Hamlin. We have been in touch with Bills and Bengals players, and with the NFL,” the NFLPA said in a tweet. “The only thing that matters at this moment is Damar’s health and well being.”

The game was initially suspended and once Hamlin was in the ambulance and off the field, officials were giving players about five minutes to warm up again to get ready to play. But Bills coach Sean McDermott was seen pulling his players off the field and into the back of the locker room. 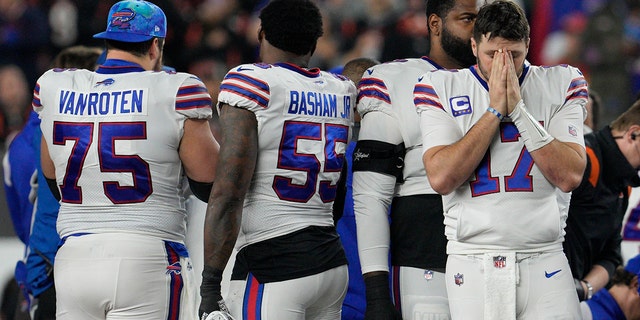 Buffalo Bills quarterback Josh Allen (17) pauses as Damar Hamlin is examined during the first half of an NFL football game against the Cincinnati Bengals, Monday, Jan. 2, 2023, in Cincinnati.  (AP Photo/Jeff Dean)

The scary incident occurred with 5:58 remaining in the first quarter and Cincinnati leading the game, 7-3. The Bengals were on their second drive of the game when quarterback Joe Burrow threw a pass to Tee Higgins. Bills safety Hamlin came over to make a tackle to end the play.

Hamlin got up from the ground and took a few steps backward before he collapsed to the Paycor Stadium turf. Medical personnel came over to Hamlin to attend to him as the ESPN broadcast went to commercial. A stretcher and backboard came out and later the ambulance.

Hamlin was on the ground for a while and multiple reporters indicated he was receiving CPR from the medical staff on the ground before he was put into the ambulance. According to FOX19, Hamlin was being rushed to the University of Cincinnati Medical Center.

The football world offered their prayers for Hamlin. Players and coaches from both teams were in tears and prayed for the best possible outcome.

The Bills selected Hamlin with the No. 212 overall pick in the sixth round of the 2021 draft. He played in 14 games last season – mostly on special teams – in his rookie season. 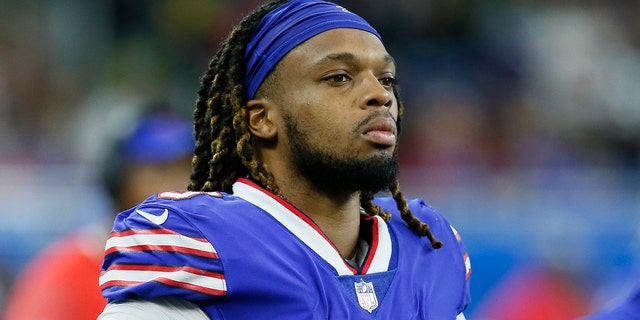 FILE – Buffalo Bills safety Damar Hamlin looks on during the second half of an NFL football game against the Cleveland Browns, Nov. 20, 2022, in Detroit.  (AP Photo/Duane Burleson, File)

Hamlin, 24, was playing his 16th game of the season. He had seen more time on the field as he recorded 91 tackles and 1.5 sacks.