Brady Quinn blasts Zach Wilson hype after Jets’ preseason opener: ‘They want so badly for this to work out’

Zach Wilson may have supporters among New York Jets fans, but former NFL quarterback Brady Quinn certainly isn’t among them.

New York Jets quarterback Zach Wilson (2) is helped off the field against the Philadelphia Eagles during the first quarter at Lincoln Financial Field in Philadelphia Aug. 12, 2022. (Eric Hartline/USA Today Sports)

“God, he looked awful,” Quinn said on the “Two Pros and a Cup of Joe” show. “Can we acknowledge once again the media just continually tries to make it something? They’re trying so – they want so badly for this to work out. It’s kind of tough, honestly, to listen to.

“I’ve not seen a quarterback get more love, for doing less – from the media – than Zach Wilson, in a long time. It’s really weird. I don’t know if it’s the desperation of the Jets’ media and fans wanting it to work.” 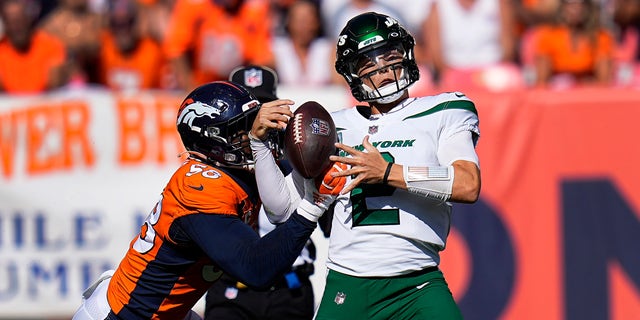 New York Jets quarterback Zach Wilson (2) is sacked by Denver Broncos outside linebacker Von Miller (58) during the first half of a game Sept. 26, 2021, in Denver.  (AP Photo/Jack Dempsey)

Wilson underwent successful arthroscopic knee surgery Tuesday and is expected to miss anywhere between 2-4 weeks. Before his injury, he went 1 for 3 for 10 yards with an interception.

“Once he elected for the draft, I thought, ‘He’s smaller, he’s going to be subject to injury.’ He has been. I understand his last season people really made a lot of the throws and things he did … and all those things, all the concerns – have all played themselves out,” Quinn said.

“The interception he threw in that game, it looked like day one … It was like, where’s the growth?” 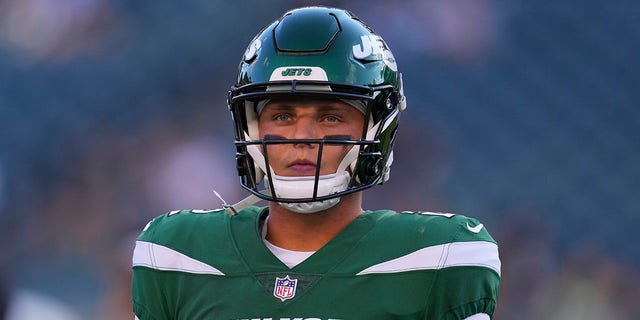 Zach Wilson of the New York Jets during a preseason game against the Philadelphia Eagles at Lincoln Financial Field Aug. 12, 2022, in Philadelphia. (Mitchell Leff/Getty Images)

The former No. 2 overall draft pick had an up-and-down rookie season, throwing nine touchdowns and 11 interceptions in 13 games. But he was not picked off in his final five games.

“I don’t get it with the media. It’s like, my God man, are we all watching the same thing right now?” Quinn added, laughing.

Backup quarterback Joe Flacco will likely be the starter during the Jets’ Week 1 matchup against the Baltimore Ravens.

Paulina Dedaj is a Digital Reporter for Fox News and Fox Business. Follow Paulina Dedaj on Twitter at @PaulinaDedaj. If you’ve got a tip, you can email Paulina at Paulina.Dedaj@fox.com