He’s come close in past years, but St. Louis Cardinals first baseman Paul Goldschmidt finally collected an MVP trophy Thursday night when the baseball writers voted him the most valuable player of the National League.

In 2013, Goldschmidt finished in second place in a tight race with Pittsburgh Pirates outfielder Andrew McCutchen.

Then, in 2015, Bryce Harper’s marvelous season with the Washington Nationals was too much to beat. He came in second place again. Goldschmidt finished third in 2017 behind Giancarlo Stanton and Joey Votto.

Paul Goldschmidt (46) and Nolan Arenado (28) of the St. Louis Cardinals after the first inning against the New York Mets at Citi Field Sept. 14, 2021, in New York City.  (Jim McIsaac/Getty Images)

But, in his 12th MLB season, Goldschmidt has the hardware, earning 22 of the BBWAA’s first-place votes while receiving eight second-place votes for a total of 380 points.

Goldschmidt’s 2022 season was the epitome of consistency — elite consistency at that. He essentially ran away from his competition at the start of the season and never looked back.

Goldschmidt never slowed down. He’d finish the regular season with a .317 average (third in MLB), .981 OPS (third in MLB), 35 homers and 115 RBI (fourth in MLB) on his way to a postseason berth with the Cardinals. 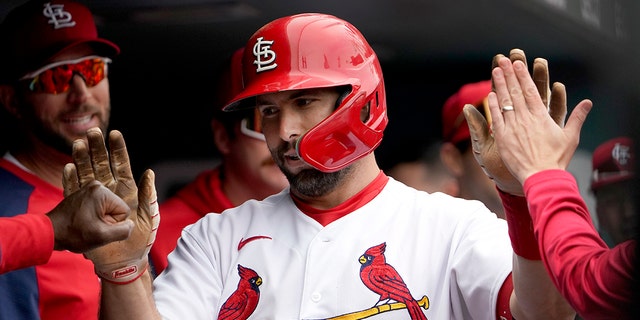 The St. Louis Cardinals’ Paul Goldschmidt is congratulated by teammates after hitting a solo home run during the first inning of a game against the Kansas City Royals May 2, 2022, in St. Louis. (AP Photo/Jeff Roberson)

Philadelphia Phillies pitching held Goldschmidt to 0-for-7 batting in the postseason.

Goldschmidt had a 7.8 WAR, just a notch below Arenado’s 7.9. Offensively, Goldschmidt bested Arenado in many categories. 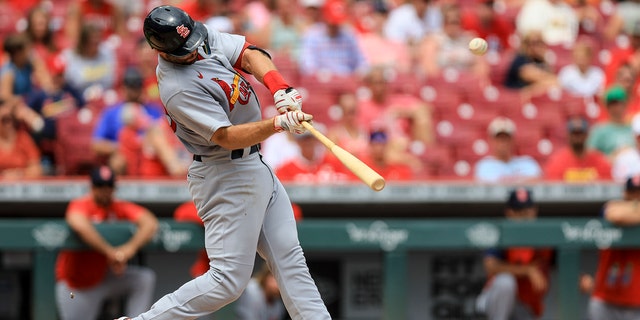 The St. Louis Cardinals’ Paul Goldschmidt hits a solo home run during the sixth inning of a game against the Cincinnati Reds in Cincinnati July 24, 2022.  (AP Photo/Aaron Doster)

It was quite a season for the Cardinals, who also watched legend Albert Pujols play his final year in MLB back where it all started in St. Louis. Pujols broke into the illustrious 700 home run club, finishing his career with 703. He also passed Babe Ruth for the second-most RBIs in MLB history with 2,218.

The Cardinals have ushered out a three-time league MVP in Pujols, but they’ll begin the 2023 season with a new MVP.