The Washington Commanders will be without quarterback Carson Wentz for quite some time after he suffered a broken ring finger on his throwing hand that requires surgery.

Wentz’s recovery time is expected to be around 4 to 6 weeks, NFL Network reports. He will have surgery later Monday after meeting with a hand specialist in Los Angeles.

While Wentz has a recovery timetable, designating him to the injured reserve hasn’t been made yet by the Commanders.

Carson Wentz of the Washington Commanders throws a pass against the Chicago Bears at Soldier Field on Oct. 13, 2022, in Chicago. (Michael Reaves/Getty Images)

This only worsens the start that Wentz has had with his new Washington squad this season, as they’ve gotten off to a 2-4 start and are last in an improved NFC East.

Wentz has worked an 84.1 quarterback rating after throwing for 1,489 yards with 10 touchdowns and six interceptions so far this season. But his struggles in the new offense were on full display this past Thursday when he was just 12-for-22 with 99 yards and a 66.3 quarterback rating.

But Wentz did fracture that finger while playing in the game and still managed to stay out on the field in Chicago. It likely affected his performance as he tried to battle through it. Still, with the Chicago Bears struggling themselves, the Commanders claimed a 12-7 win in a sloppy overall game.

Wentz was traded to the Commanders from the Indianapolis Colts this offseason, with head coach Ron Rivera being one of the people to sign off on making Wentz the next man up at quarterback. However, recent comments from Rivera about how his offense is behind the rest of the division because of the quarterback position sparked some controversy that Rivera later exploded about following Thursday’s win.

“Everybody keeps wanting to say I didn’t want anything to do with Carson,” Rivera told reporters. “Well, b——-. I’m the f—— guy that pulled out the sheets of paper, that looked at the analytics, that watched the tape in freaking Indianapolis. And that’s what pisses me off. Because the young man doesn’t deserve to have this all the time.” 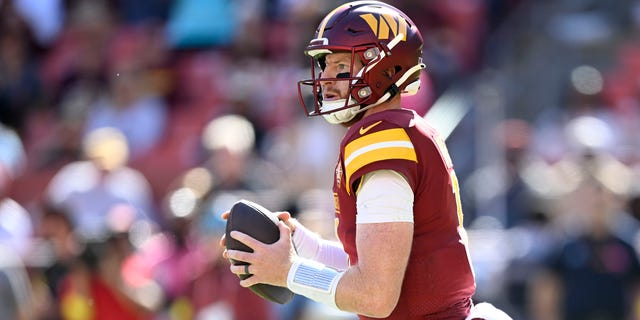 Carson Wentz of the Washington Commanders drops back to pass against the Tennessee Titans at FedEx Field on Oct. 9, 2022, in Landover, Maryland. (G Fiume/Getty Images)

Washington is Wentz’s third team since entering the league as the second overall pick in the 2016 NFL Draft to the Philadelphia Eagles.

Taylor Heinicke, who played in 16 games for the Commanders last season with 15 starts, will once again be the signal caller with Wentz sidelined. He threw for 3,419 yards with 20 touchdowns and 15 interceptions while owning a 7-8 record.

Heinicke can use his legs and does have a solid arm. Perhaps the Commanders’ offense can rally around someone they are a bit more comfortable with under center in the coming weeks. 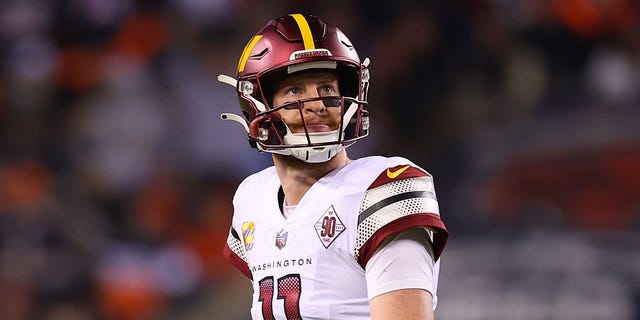 Carson Wentz of the Washington Commanders reacts against the Chicago Bears at Soldier Field on Oct. 13, 2022, in Chicago. (Michael Reaves/Getty Images)

The Commanders will host the Green Bay Packers next Sunday, another team that has struggled a bit, coming off two losses to the New York Giants and Jets.