Clergymen or Spies? Churches Become Tools of War in Ukraine 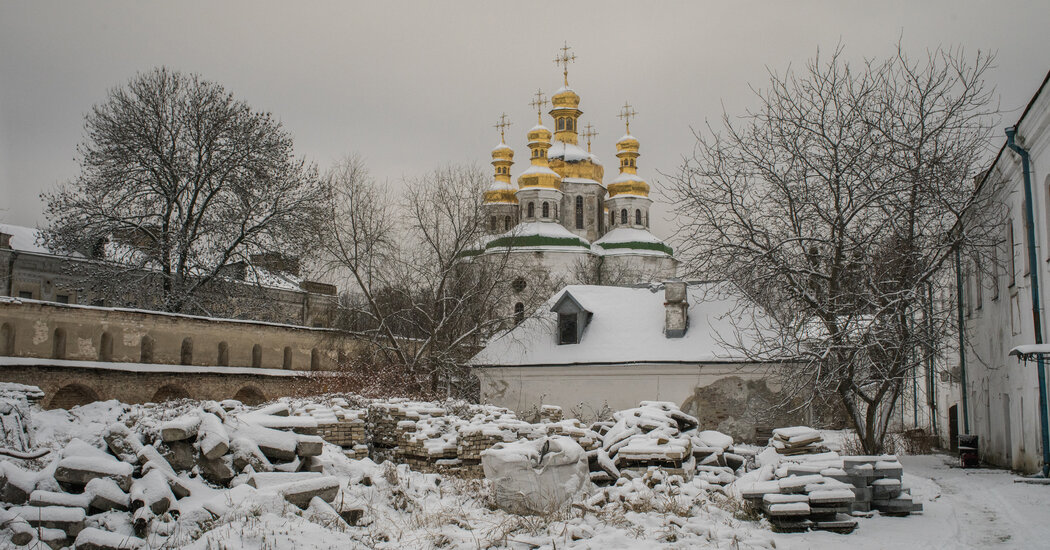 Ukrainian officials are cracking down on a branch of the Russian Orthodox Church that they describe as a subversive force doing the Kremlin’s bidding.

KYIV, Ukraine — Andriy Pavlenko, an Orthodox church abbot in eastern Ukraine, seemed to be on a selfless spiritual mission. When war came, he remained with his flock and even visited a hospital to pray with wounded soldiers.

But in fact, according to court records, Mr. Pavlenko was working actively to kill Ukrainian soldiers and Ukrainian activists, including a priest from a rival Orthodox church in his city, Sievierodonetsk.

“In the north, there are about 500 of them, with a mortar platoon, five armored personnel carriers and three tanks,” Mr. Pavlenko wrote to a Russian officer in March, as the Russian Army was hammering Sievierodonetsk and areas around it with artillery.

“He needs to be killed,” he wrote of the rival priest, according to evidence introduced at his trial in a Ukrainian court, showing he had sent lists to the Russian Army of people to round up once the city was occupied. Mr. Pavlenko was convicted as a spy this month and then traded with Russia in a prisoner exchange.

His was hardly an isolated case. In the past month, the authorities have arrested or publicly identified as suspects more than 30 clergymen and nuns of the Ukrainian arm of the Russian Orthodox Church.

To the Ukrainian security services, the Russian-aligned church, one of the country’s two major Orthodox churches, poses a uniquely subversive threat — a widely trusted institution that is not only an incubator of pro-Russia sentiment but is also infiltrated by priests, monks and nuns who have aided Russia in the war.

Recent months have brought a quick succession of searches of churches and monasteries, and decrees and laws restricting the activity of the Russian-aligned church, confusingly named the Ukrainian Orthodox Church of the Moscow Patriarchate. On Tuesday, Ukraine’s Supreme Court upheld a 2018 law that requires truthful naming of religious organizations if they are affiliated with a country at war with Ukraine — a law tailored to force the church to call itself Russian.

President Volodymyr Zelensky this month asked Parliament to ban any church that answers to Russia, though no details have been proposed yet, so it remains unclear how that would work. The Ukrainian authorities plan to revoke the Russian church’s lease on two revered houses of worship — the Holy Dormition Cathedral and the Refectory Church — in the Monastery of the Caves complex in Kyiv, a thousand-year-old catacomb cradling the mummies of the holiest saints in Slavic Orthodoxy.

The Ukrainian crackdown on the Russian church has elicited howls of protest from both the church and the Russian government, which call it an assault on religious freedom. On Tuesday, Metropolitan Pavlo Lebed, the head of the Russian-aligned church at the Monastery of the Caves, appealed to Mr. Zelensky in a video.

“Do you want to take away faith in people, take away the last hope?” he said. “Do not tell us which church to go to.”

Mr. Zelensky, who is Jewish, and Ukrainian law enforcement agencies say the crackdown has nothing to do with religious freedom, which they argue does not extend to espionage, sedition, sabotage or treason.

For centuries, Ukraine’s Orthodox churches were under the Russian church, whose leadership in Moscow wholeheartedly supports President Vladimir V. Putin’s war. But in recent years, many priests and parishes, and millions of the faithful, have switched allegiances to the independent new Orthodox Church of Ukraine, a migration accelerated by the war. The two churches are virtually identical in liturgy; what separates them are politics and nationalism.

Early in December, the Ukrainian Orthodox Church called the accusations of collaboration between its clergy and Russia “unproven and groundless.”

The Russian-aligned church, which still represents millions of Ukrainians, insists that it cut ties with its Russian hierarchy at the onset of the war. The independent Ukrainian church calls that break insincere and flatly condemns its counterpart for not making a real break with Moscow.

“The Russian Orthodox Church is in reality a tool of Russian aggression,” Archbishop Yevstratiy, a spokesman for the Orthodox Church of Ukraine, said in an interview in the St. Michael’s Golden Domed Monastery in Kyiv.

Outside military analysts have seen reason for Ukraine’s concern. The church of the Moscow Patriarchate “materially supported Russia’s annexation of Crimea and the invasion of Eastern Ukraine,” the Institute for the Study of War, a U.S.-based analytical group, wrote in a research note on the role of the Russian-affiliated church in the war.

Evidence of churches being treated as instruments of Russian aims is commonplace. Searches have turned up wads of cash, flags of the former Russian client states in eastern Ukraine and pamphlets printed by the Russian Army for distribution in occupied territories, the Security Service of Ukraine, the domestic intelligence agency, has said in statements.

The archimandrite, or top religious official, of the Assumption Cathedral in Kherson in southern Ukraine attended a ceremony in the Kremlin in which Russia claimed to annex the Kherson province as part of Russia.

During the eight-month Russian occupation of Kherson city, Moscow’s forces cracked down on private charities in an effort to steer the population to Russian humanitarian aid programs, which required registration with occupation authorities. It was a policy of forcing dependence on Russia. When a priest nonetheless continued operating a soup kitchen, the Russian-aligned church excommunicated him.

Ukrainian officials say that priests and monks — or people posing as them — who are also spies have caused problems for Ukraine’s military. At one monastery north of Kyiv this month, the authorities said they found six men in monks’ robes — all of whom were athletically built, spoke Russian but no Ukrainian, and had no documents. The police arrested the men and are investigating whether they are spies.

“Being a priest is ideal cover for any intelligence agent,” said a Ukrainian intelligence official knowledgeable about the investigation of the Russian-aligned church, but who was not authorized to speak publicly. “People are ready to trust you, because you are a priest.”

For his part, Mr. Pavlenko, the abbot who was later convicted of espionage, took to visiting wounded Ukrainian soldiers at a hospital, according to Pavlo Dubyna, a former resident of the town and acquaintance of Mr. Pavlenko. After such visits, he would walk in the street and speak on his cellphone, Mr. Dubyna said.

Ukrainian authorities arrested the priest in April, when the Russian military was still bombarding Sievierodonetsk, which it captured in June. In an act they say proved Mr. Pavlenko’s culpability, Moscow accepted the priest in a prisoner swap for an American held by Russia, Suedi Murekezi, an Air Force veteran who had been living in southern Ukraine before the war.

Evidence from the trial opened a window into the priest’s blending of espionage and vendetta against priests in the independent Ukrainian church, which before the war had been winning away followers from the Russian church. Prosecutors presented what they said were short descriptions of the rival clergy, sent to the Russian Army by Mr. Pavlenko.

“The spiritual guide for the nationalist brigades and the Ukrainian Army in the Luhansk region,” said a March 15 note that said the priest in question should be killed.

Another message described another priest in the Ukrainian church whose brother was fighting in the war and said, “I think we need to put an end to him too, as he is not our guy.”