CMA Awards: Luke Bryan, Peyton Manning team up as hosts, Carrie Underwood to perform and what else to know

The 2022 CMA Awards are set to take place Wednesday, Nov. 9, and promise to be an exciting show.

The CMA Awards have been known as one of country music’s biggest nights, and the CMA stage has seen it all. With a new host, an impressive list of performers and heartwarming tributes planned, this year’s show is expected to be filled with just as many iconic moments, if not more.

Here is what you need to know about the 2022 CMA Awards.

PEYTON MANNING AND LUKE BRYAN ‘GET IN SYNC’ FOR CMA AWARDS: ‘THAT IS NOT GOOD’

The CMA Awards will air Nov. 9 on ABC and will be available to stream the next day on Hulu.

Luke Bryan and Peyton Manning are set to host the award show this year. (Art Streiber/ABC via Getty Images)

This year, the CMA Awards are set to be hosted by Luke Bryan and Peyton Manning. While Bryan has hosted the award show in the past, this is the first major hosting gig for Manning, something Bryan isn’t worried about.

Bryan is sure that although Manning, a legendary former NFL quarterback, isn’t a country music artist, fans will respond positively to him due to the fact that he has such a deep love for country music.

“We both don’t take ourselves too seriously. And he’s obviously been in front of the TV. He’s just always done really well in front of the camera, and he’s a longtime fan of country music,” Bryan told Fox News Digital. “I think us being on stage will be able to, you know, have a lot of fun with the crowd and just make it a really special night.”

Manning is excited to be part of country music’s biggest night, saying in a statement, “I am such a huge fan of country music, so to have the chance to stand among so many incredibly talented artists is an absolute honor.”

For Bryan’s part, the “Drink a Beer” singer hosted the show in 2021 on his own, taking over from 2020 hosts Reba McEntire and Darius Rucker.

“I mean, we’re going to see what big topics are happening,” Bryan said ahead of the show. “You know, going into that week. And we’ll have some fun with some people.” 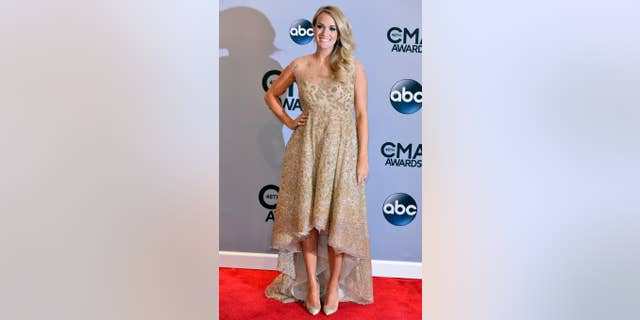 This year’s show will feature a lineup of performers, including Carrie Underwood. (Reuters)

This year’s award show is packed with an all-star lineup of performers, featuring special collaborations with artists both within and outside the country music genre and individual performances by country music’s biggest stars.

Some collaborations include Brothers Osborne singing “It’s Only Rock ‘N’ Roll (But I Like It)” with The War and Treaty, Thomas Rhett singing “Where We Started” with Katy Perry, and Elle King singing “Great Balls of Fire” with The Black Keys.

As far as individual performers go, Carrie Underwood is set to sing “Hate My Heart,” Miranda Lambert is singing “Geraldine,” Carly Pearce will sing “Dear Miss Loretta,” Morgan Wallen will sing “You Proof” along with many others.

There will also be two tribute performances, one for Loretta Lynn and another for Alan Jackson. 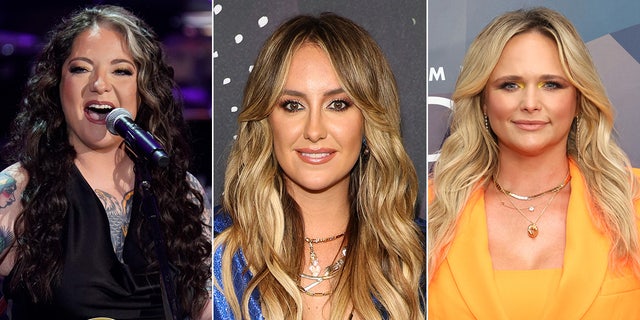 Lainey Wilson, center, leads the pack in nominations with a total of six, followed by Ashley McBryde, left, with five and Miranda Lambert with three. (Getty Images)

Tied for second place with five nominations each are Ashley McBryde, Carly Pearce and Chris Stapleton, who is also up for the biggest award of the night, entertainer of the year. Stapleton is up against Miranda Lambert, Carrie Underwood, Luke Combs and Morgan Wallen for that honor, all of whom, except Wallen, have been nominated in this category multiple times in the past, with Combs taking home the award at last year’s ceremony.

With her three nominations this year, Lambert continues her dominance over the award show as the most nominated female in the history of the show with a total of 61 nominations. This year, she also secured her place in history as the third-most nominated artists of all time in the award show’s history, according to the CMA nominee announcement.

Her nominations this year are in the album of the year, entertainer of the year and female vocalist of the year categories.

“It’s thrilling to celebrate these deserving nominees while our industry is returning to live music,” CMA Chief Executive Officer Sarah Trahern said in a statement. “This year’s slate is impressive, with some nominees logging historic milestones while others are just getting started. No matter what stage in their career, they each bring a unique voice and unforgettable story to life, showing that Country Music is stronger than ever! We look forward to honoring them this November.” 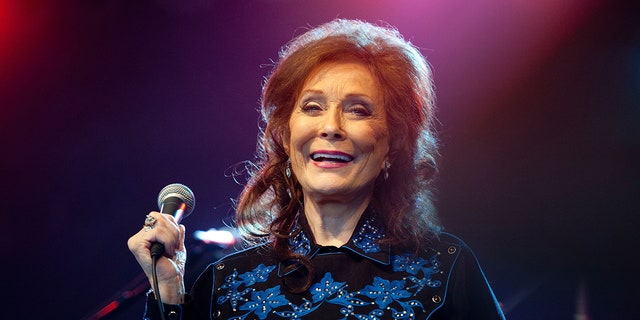 The CMA Awards are set to begin with a tribute to Loretta Lynn, who passed away earlier this year. (Erika Goldring/WireImage)

The show is set to start with a tribute to the legendary late country singer, Loretta Lynn, who passed away earlier this year at the age of 90. Lynn’s career in country music spanned six decades, with hits such as “Coal Miner’s Daughter,” “After the Fire is Gone” and “Don’t Come Home A-Drinkin’.”

As an icon in the business, many current country music artists have been inspired by her and will participate in a tribute in her honor. Lynn herself won the CMA Award for female vocalist of the year in 1967, 1972 and 1973. 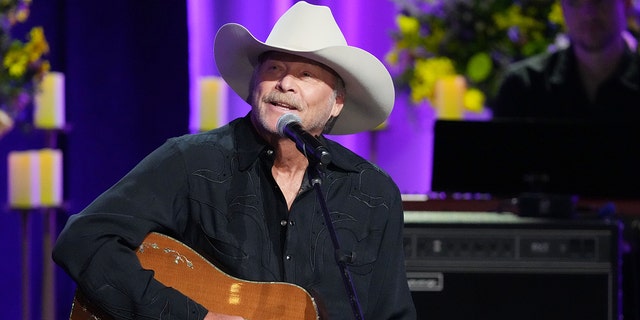 Alan Jackson is set to receive the Lifetime Achievement Award at this year’s CMA Awards. (Larry McCormack/Variety via Getty Images)

This year’s recipient of the Willie Nelson Lifetime Achievement Award is Alan Jackson. Jackson has been in the country music industry since 1987 with his first album, “New Traditional.” Since then, he has gone on to release 17 albums and has sold more than 40 million albums throughout his career.

Nine of Jackson’s albums have gone multi-platinum, and he has become one of country music’s most decorated artists. Jackson has been named CMA entertainer of the year three times, has won three Grammys, is a member of the Country Music Hall of Fame, the Grand Ole Opry, the Songwriters Hall of Fame and the Georgia Music Hall of Fame.

The Lifetime Achievement Award was first instituted in 2012 at the 46th CMA Awards and the first recipient was Willie Nelson. It is only given to those who have achieved prominence through their performances, record sales, philanthropic efforts and humanitarian work but only under the strict condition that they have positively impacted the growth of the genre over time.

“We are thrilled to honor Alan Jackson this year with the CMA Willie Nelson Lifetime Achievement Award,” Trahern said. “A three-time CMA Entertainer of the Year, he is responsible for so many iconic moments in CMA Awards history.

“Just as Alan has been influenced by many Country legends throughout his career, he too has inspired a generation of artists to stay true to the authenticity of Country Music. We are so excited to bring Dierks [Bentley], Jon [Pardi], Carrie [Underwood] and Lainey [Wilson] together on the CMA Awards stage for what will surely be an incredible and touching tribute to an artist they each deeply admire. Having had the great fortune of working with Alan over the years, I am delighted we are honoring him with this milestone award next month.”

His accomplishment will be celebrated by a tribute performance featuring Dierks Bentley, Jon Pardi, Carrie Underwood and Lainey Wilson.