Congress misses its deadline to fund the government again

Believe it or not, despite weeks of machinations, a 4,100-page bill and a House roll call vote on December 23rd, Congress still missed its deadline to fund the government.

The government didn’t shut down in the wee hours of Christmas Eve morning – even though Congress managed to approve the bill before the 11:59:59 pm et deadline on the 23rd. Lawmakers dithered for weeks – dragging out the final vote on the omnibus spending bill until nearly the last moment.

Congress just doesn’t run down to Staples, buy a couple of reams of computer paper off the shelf and then print the bill out on a Xerox Phaser 3610, sending that version to the President to sign into law.

A big, complicated bill like the omnibus must be “engrossed” and “enrolled.” Engrossment refers to the final version of legislation when passed by one body or other – but before it’s sent to the other chamber. In other words, the Senate passed the omnibus and then altered the legislation on the fly, adopting a host of amendments. So, upon passage, the Senate sent the tweaked version to the House to pass.

Once the House approved the bill, both bodies were in sync. But, it would take time for Congressional enrollment clerks to finalize the bill for President Biden’s signature.

This is not an easy process. In fact, it was likely the enrollment clerks would need a couple of days to get the bill into proper parliamentary form as it was – even if they worked Christmas Eve and Christmas day.

Federal law requires Congress to print the legislation on parchment. That’s a practice which dates back to the beginning of the republic. Printing the bills on parchment was a method to protect Congress against forgeries. Plus, the Speaker of the House and the President Pro Tempore of the Senate need to sign the bill. So, the technical process of getting the omnibus to the President to sign before the Friday night deadline was out of the question. This was going to take until a few days after Christmas at the earliest.

Despite the sturm and drang about “funding the government before the deadline,” Congress punted. Again.

Very quietly – with nary a creature stirring – both the House and Senate approved yet another interim spending bill. This would just keep the lights on for a few days, giving the enrollment clerks time to prepare the bill. It would only run through December 30.

So, while Congress approved the omnibus, the government operated on the third Band-Aid bill okayed by Congress since September. 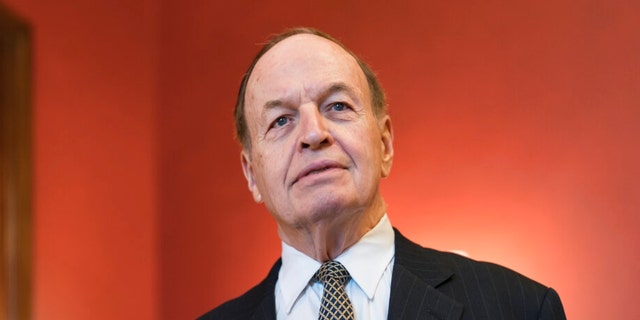 Eighteen Senate Republicans – including Shelby – voted for the omnibus bill. Only nine House Republicans voted aye. But the omnibus served as a case study in the growing schism in the Republican party – between MAGA conservatives and other “mainstream” GOPers.

“We had 18 Republicans who joined with Democrats in the Senate, get on their fancy planes and go home. And we’re sitting here trying to do the work of the people, not spend money we don’t have,” thundered Rep. Chip Roy, R-Tex., in the House chamber.

Roy’s face reddened as he hollered and gestured, his oratory audible in a Capitol hallway one floor up from the House chamber – even though the doors were closed.

“I want to remind the members that the microphones are working,” sniped House Rules Committee Chairman Jim McGovern, D-Mass., at Roy. “People don’t have to shout.”

House Minority Leader Kevin McCarthy, R-Calif., later took the floor to chastise Democrats – and some Republicans – who supported the omnibus.

While McCarthy may have railed against the bill, the legislation may actually have done him two favors.

First, it funds the government into next September. That way, the House Republican majority won’t need to wrestle with government funding when it takes control next year. Secondly, you always need a foil in politics. McCarthy is struggling to find the votes to become Speaker. So McCarthy ranted against the omnibus in a lengthy floor speech.

“This is a monstrosity that is one of the most shameful acts I’ve ever seen in this body. The appropriations process failed the American public, and there’s no greater example of the nail in the coffin of the greatest failure of a one party rule of the House, the Senate and the presidency,” pronounced McCarthy.

A number of McCarthy’s most ardent supporters filled in the seats behind him in the House chamber, eager to create a visual on camera that they backed the California Republican for Speaker. Among them, Reps. Stephanie Bice, R-Okla., Clay Higgins, R-La., and David Kustoff, R-Tenn.

Apparently McGovern portrayed the roles of both Muppet characters Statler and Waldorf, during the floor debate, heckling McCarthy at the conclusion of his remarks.

“After listening to that, it’s clear, he doesn’t have the votes yet,” deadpanned McGovern.

A staggering 230 members filed letters with the House Clerk, allowing them to vote remotely on the omnibus. The House implemented proxy voting in the House in the spring of 2020 for the pandemic. But the system is now rife with abuse. Technically, lawmakers are supposed to attest they’re begging off and voting from home due to COVID. But that’s rarely the case anymore.

McCarthy vowed to eliminate proxy voting in his quest to clasp the Speaker’s gavel.

“The American people deserve us to be here over Christmas, actually fighting for them instead of trying to catch planes while half this body are going to vote by proxy,” lectured Roy. “They’re lying on forms saying that they’re voting by proxy for COVID and it’s a lie. And half this body’s going to do it.”

Only one Democrat voted against the omnibus: Rep. Alexandria Ocasio-Cortex, D-N.Y. But fellow squad member, Rep. Rashida Tlaib, D-Mich., voted by proxy. Tlaib didn’t vote yes or no. Tlaib announced that her vote was “present” – despite her absence.

Congress never hurts for irony. And the irony here is that there’s no real break between the end of the 117thCongress and the start of the 118th Congress on January 3.

So it may look like they’re all wrapped up on Capitol Hill. But with the Speaker’s vote on January 3, in reality, things are just getting started.

Nothing is ever truly complete in Congress.

Chad Pergram currently serves as a senior congressional correspondent for FOX News Channel (FNC). He joined the network in September 2007 and is based out of Washington, D.C.