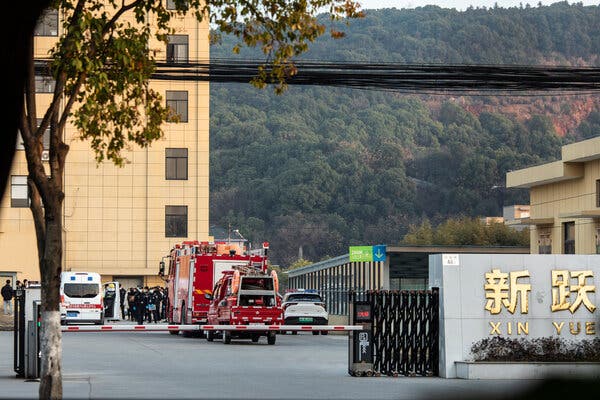 In the southwestern Chinese city of Chongqing, hundreds of workers locked in a pay dispute with a Covid test kit manufacturer hurled objects at police officers in riot gear, who held up shields as they retreated. Standing on stocks of inventory, protesters kicked and tossed boxes of rapid antigen tests on to the ground, sending thousands of tests spilling.

In the eastern city of Hangzhou, witnesses said several workers climbed on the roof of a test kit factory and threatened to jump to protest unpaid furloughs. And at a separate test manufacturing plant in the city, workers protested for days over a wage dispute.

The unrest this month highlights a little-noticed aspect of the social and economic fallout from China’s “zero Covid” policy U-turn. Mass testing was a cornerstone of China’s strategy of isolating the virus before it could spread. But Covid testing of any sort is no longer in high demand. Companies that manufactured test kits and analyzed results in a lab are seeing their revenues plummet, leading to layoffs and pay cuts for their workers. One report suggested that mass testing in large cities accounted for about 1.3 percent of China’s economic output.

The consequence has been a new source of turmoil that challenges the ruling Communist Party’s efforts to maintain stability amid high youth unemployment, a flagging economy and an explosion of Covid across the country. China said on Saturday that it had recorded nearly 60,000 fatalities linked to the coronavirus in the month since it lifted “zero Covid,” though experts said the actual death toll was likely much higher.

The New York Times visited three Covid test making factories in Hangzhou where workers and residents confirmed that there had been labor protests in recent days. At one plant operated by a firm called Xinyue Biotech, a fire truck, an ambulance and a police van could be seen in the factory yard on Wednesday responding to a worker who had climbed on to the fifth-floor roof and threatened to jump to protest unpaid wages. The shuttered plant had been the scene of days of demonstrations, witnesses near the factory said.

The Times also examined videos that have circulated on social media of protests in Hangzhou as well as Chongqing, where workers confronted the police in large numbers.

The disputes in Chongqing and Hangzhou could portend more unrest to come. Many among China’s armies of “big whites,” low-level government workers charged with enforcing Covid restrictions and named after their signature white hazmat suits, have been let go, muddying an already volatile labor market.

Understand the Situation in China

The Chinese government cast aside its restrictive “zero Covid” policy, which had set off mass protests that were a rare challenge to Communist Party leadership.

Factories across China are still strapped for cash amid the broader slowdown. Workers have next to no recourse to resolve their grievances other than to lash out, said Li Qiang, founder and executive director of China Labor Watch, a New York-based Chinese labor rights group.

“These protests have been very violent because the channels to defend workers’ rights are very limited, while the trust toward the government and laws is low,” Mr. Li said. “It demonstrates that if a company ignores workers rights, especially the most vulnerable temporary workers, it will face serious consequences.”

In Chongqing, protesters at a test kit manufacturer chanted “Pay me back” as they faced off with lines of police on Jan. 7. It was not immediately clear what sparked the dispute between workers and the test kit manufacturer, Zybio. Videos posted on social media leading up to the protests warned of labor agencies in the area exploiting job seekers by inflating how much work Covid test manufacturers were offering and how much they would pay.

The Times verified the location of the Zybio protest videos by matching buildings in videos with online photos and satellite images of the industrial park. One clip showed protesters throwing plastic containers, stools and a traffic cone at police equipped with riot gear. The company did not respond to requests for comment, and several protesters contacted by The Times declined to be interviewed.

In Hangzhou, protests flared after workers at the Acon Biotech plant were told at the start of this month they would be furloughed for two weeks because the company’s revenues had dwindled since “zero Covid” measures were dropped.

One employee who participated in the protests, who agreed to speak only if not quoted by name given the political sensitivity of labor unrest, said workers were enraged by the furlough because it meant they could not earn money before the Lunar New Year, which starts this weekend.

At one point, distraught employees threatened to jump off the roof of a company building. The workers were finally given 3,000 yuan, or roughly $445, apiece a week ago, and the bulk of the work force then left for the holiday.

Many Chinese testing companies had been amassing fortunes during nearly three years of stringent Covid containment measures. But the emergence of the highly transmissible Omicron variant made containing the virus all but impossible, and China abandoned the strategy in early December.

Even without Omicron, China’s strategy of mass testing was proving financially unsustainable. Many local governments — already under significant financial pressure from the slowdown and a dearth of land sales for real estate development — struggled to pay for the millions of free swabs that residents were ordered to take virtually every day.

To fund testing and other pandemic controls, money was diverted from public projects in some provinces, while cities cut bonuses for officials and imposed pay cuts on civil servants. Several provinces and municipalities, including Guizhou in China’s southwest, began charging for the tests.

Lab testing firms that earlier reaped huge windfalls began reporting that governments were late on payments, leaving them exposed to bad debt. Among them was Dian Diagnostics, a large testing company in Hangzhou, which reported in October that the amount of money it was owed had surged by nearly 80 percent compared to a year before.

Shenzhen Hezi Gene Tech, another fast-growing testing firm, opened six new labs across China in October only to shutter half of them in the last few weeks. It was unclear if the closures were spurred by debt or a lack of business. The company did not respond to a request for comment.

“The whole industry has been hit particularly hard with the elimination of mandatory testing in the country. The demand is no longer there,” said Yanzhong Huang, a senior fellow for global health at the Council on Foreign Relations, who argued that “zero Covid” had been partly prolonged because it served so many business interests.

“They made a lot of money working for the government implementing ‘zero Covid,’” Mr. Huang said of labs and test manufacturers.

Just how disruptive the collapse of testing and all the employment associated with Covid controls will be to China’s economy remains to be seen. The lifting of “zero Covid” will remove constraints on economic activity, and that could spur growth that would overshadow the loss of Covid-related businesses, said Taylor Loeb, a senior economic analyst for Trivium China, a consulting firm.

“A lot of these jobs were never going to be long-term, stable employment opportunities,” Mr. Loeb said.

To many migrant workers, the timing could not be worse. Employees are usually eyeing bonuses and counting their savings in the weeks leading up to Lunar New Year so that they can travel home for the holiday, settle debts and lavish their family and friends with gifts.

In Hangzhou, a tense standoff between the police and hundreds of workers at an Alltest Biotech factory devolved into a shoving match Jan. 9, a video showed. Dozens of them were taken away by the police, several eyewitnesses said in interviews.

Workers hired by a temporary employment agency on Alltest’s behalf had complained they were being paid less than permanent workers, according to an employee interviewed at the factory gate, who spoke on the condition of anonymity because of the sensitivity of the matter. An employee who answered a phone at Alltest said operations had returned to normal, but declined to provide a name or discuss the unrest.