Death Toll in Peru Rises to 46 Amid Extraordinary Violence 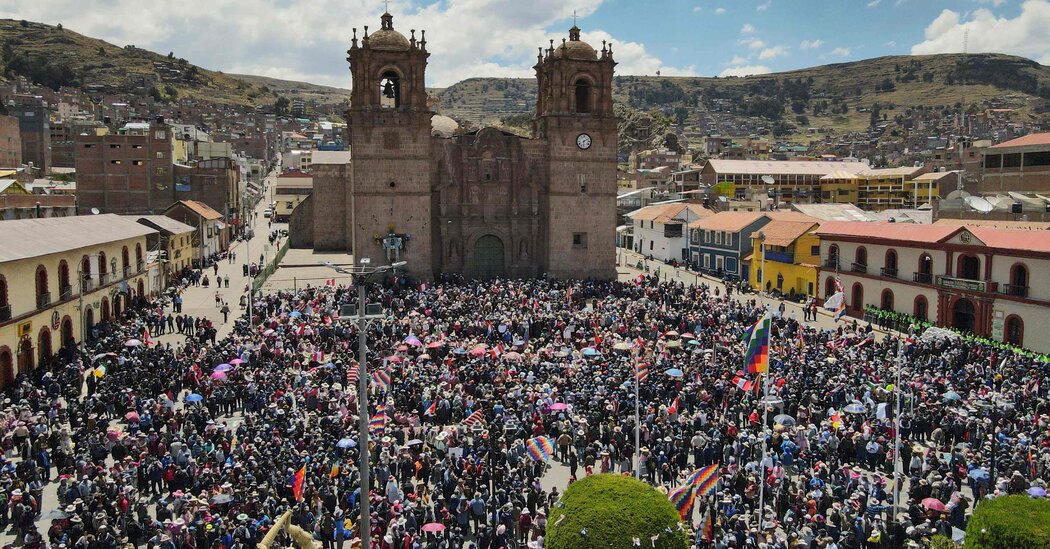 “What happened yesterday was really a massacre,” said one human rights activist.

LIMA, Peru — At least 17 people were killed in southern Peru in a matter of hours on Monday amid ongoing protests over the ouster of the former president, an extraordinary spasm of violence that led to criticism of excessive force by the military and the police.

The deaths heightened concerns that the protests would continue to grow.

Peru, the fifth-most-populous nation in Latin America, has been the scene of violent demonstrations since mid-December, when the country’s leftist president, Pedro Castillo, who had promised to address longstanding issues of poverty and inequality, attempted to dissolve Congress and rule by decree. The move was widely condemned as unconstitutional and Mr. Castillo was arrested and replaced by his vice president.

Supporters of Mr. Castillo, many of them living in impoverished rural regions, quickly took to the streets to demand new general elections, with many claiming they had been stripped of the right to be governed by the man they had voted into office just one year earlier.

The violence, in the southern city of Juliaca near the border with Bolivia on Monday, marked the deadliest clash between civilians and armed actors in Peru in at least two decades, when the country emerged from a dictatorship as well as from a long and brutal fight with a violent guerrilla group, a conflict that left at least 70,000 people dead, many of them civilians.

On Tuesday, Jennie Dador, executive secretary of the National Human Rights Coordinator of Peru, an accountability group, blamed “indiscriminate use of force” by state security forces for Monday’s deaths.

“What happened yesterday was really a massacre,’’ she said. “These were extrajudicial killings.”

Peru’s interior minister, Victor Rojas, said that the protests in Juliaca had begun peacefully but that they turned violent around 3 p.m., when about 9,000 protesters tried to take control of the airport and people armed with makeshift guns and explosives attacked police.

Mr. Rojas claimed that security forces had acted within legal limits to defend themselves. “It became impossible to control the mob,” he said.

The country’s demonstrations began shortly after authorities arrested Mr. Castillo on charges of rebellion on Dec. 7. Over the last month, some protests have been peaceful; in other cases marchers have used slingshots to fling rocks, set up roadblocks on vital highways, burned government buildings and taken over airports.

When the new president, Dina Boluarte, a former ally of Mr. Castillo’s, declared a state of emergency in December, the military took to the streets to maintain order.

Monday’s violence brings the national death toll since Mr. Castillo’s ouster to at least 46 people, according to Peru’s ombudsman’s office. All of the dead have been civilians, the office said, with 39 people killed amid protests and seven killed in traffic accidents related to the chaos or as a result of protesters’ blockades.

Hundreds of police officers and civilians have been injured.

Not included in that count is the body of a person found dead Tuesday in a burned police vehicle in Juliaca, after the interior minister said that the vehicle had been attacked.

The violent convulsions in Peru come as South America faces significant threats to many of its young democracies, with polls showing exceptionally low levels of trust in government institutions, politicians and the media.

On Sunday, supporters of Brazil’s former far-right president, Jair Bolsonaro, stormed Congress and other buildings in the capital, fueled by a belief that the election Mr. Bolsonaro lost in October had been rigged. In nearby Bolivia, protests have erupted in the economic hub of Santa Cruz following the arrest of the opposition governor, whose supporters claim he is being persecuted by the ruling government.

In Peru, the most recent bloodshed occurred in the region of Puno, a heavily Indigenous part of the country, after villagers from remote Aymara communities arrived by the thousands to the city of Juliaca.

Many are calling for Mr. Castillo to be returned to office, a political nonstarter in the capital of Lima, and a move that would be illegal.

The chief demand is new general elections, which the electoral authorities said could happen as early as late this year. Congress has rejected such a tight time frame, with many representatives reluctant to give up their seats, but has backed a proposal for a vote in April 2024.

By early Tuesday afternoon, Ms. Boluarte still hadn’t commented on the unrest since confirming the first civilian killed a day earlier, when she sounded exasperated with protesters’ demands.

“The only thing in my hands is bringing forward elections and we’ve already proposed it,” Ms. Boluarte said at an event on Monday. “During peace, anything can be achieved, but amid violence and chaos it gets harder.”