Abrams raised more than $103 million for the losing effort, according to The Atlanta Journal-Constitution, which became the latest publication to put a spotlight on the campaign’s lingering debt.

“It’s incredibly bad planning, and it shows where their values are at,” a senior Democratic official told the AJC. “You can’t look up one day and realize you can’t pay the bills.”

Incumbent Republican Gov. Brian Kemp defeated Abrams in November despite the “record-setting haul” for Abrams, who became a media darling during her 2018 gubernatorial run and subsequent voting rights advocacy.

‘But her campaign’s expenditures have come under sharper scrutiny as new details emerge about the tight cash crunch she faced before her November defeat to Kemp by nearly 8 points,” AJC reporter Greg Bluestein wrote.

Axios previously reported that “money became so tight that most of the 180 full-time staffers were given an abrupt paycheck cutoff date — just a week after the November election.” Some of those staffers reportedly said they feared they wouldn’t be able to make their upcoming rent payments.

Abrams campaign manager Lauren Groh-Wargo told Axios that more than $1 million is still owed to vendors, and the team is attempting to repay debts. However, the Atlanta-based newspaper spoke with a variety of insiders who “surfaced new details about profligate spending that led to a dire financial squeeze by the end of the campaign.”

Bluestein spoke with former staffers who detailed over-the-top expenses, such as a home rented to serve as the backdrop for TikTok videos.

“Some aides commandeered the vacant five-bedroom craftsman-style house, now available to rent at $12,500 a month, as a makeshift office,” Bluestein wrote. “A pop-up shop and ‘swag truck’ were assigned to dispense merchandise, such as T-shirts and hoodies, to win over young voters. But staffers grumbled that there was no apparent strategy behind the giveaways, which they said seemed careless and costly.”

Staffers also complained of “excessive spending on polls that were disregarded and consultants with confusing or conflicting roles within the sprawling operation,” and said “a record of lavish spending” hurt Abrams’ campaign. 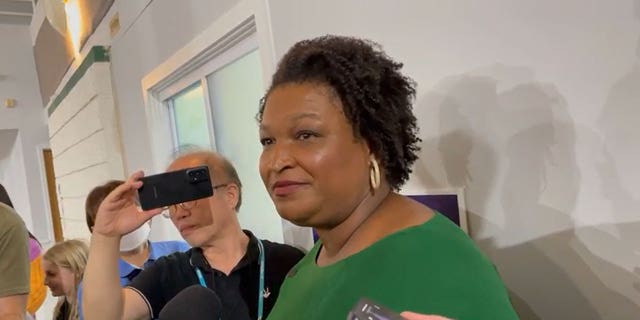 Failed Georgia gubernatorial candidate Stacey Abrams raised more than $103 million for the losing effort, according to The Atlanta Journal-Constitution, which became the latest publication to put a spotlight on the campaign’s lingering debt with a damning report.  (Brandon Gillespie)

Bluestein noted that Abrams campaign also “spent campaign cash at a rapid pace during her 2018 run for governor,” which worried allies.

“She cast the strategy as the price of building a labor-intensive infrastructure designed to turn out oft-ignored voters who usually skipped midterm elections. This cycle, she could rely upon a new financial mechanism that allowed gubernatorial nominees to raise unlimited cash from individual donors. Abrams amassed more than $53 million through that committee, helped by megadonors who wrote checks as large as $5 million,” he wrote. “Still, even as Abrams and her aides set midterm fundraising records, her campaign burned through cash at equally high rates.”

Bluestein wrote that an early sign the campaign has money issues came in the final two weeks of the race when TV buys were slashed in half. Another key example came when the campaign scrapped a program that allowed staffers to schedule mental health sessions.

Abrams has since launched a media tour, which Bluestein said has irked some of her ex-deputies who don’t think she should be promoting herself when “significant” debt is still owed from the failed campaign.

“I’m done with this… we have vendors still waiting to be paid,” a former consultant told Bluestein.

Brian Flood is a media reporter for Fox News Digital. Story tips can be sent to brian.flood@fox.com and on Twitter: @briansflood.