Legendary NFL player Deion Sanders accepted a head coaching position at a historically black college in 2020. And during his three seasons at the helm “Coach Prime” has brought unprecedented attention to HBCU sports.

On Saturday in Atlanta, Sanders donned Jackson State football appeal from the sidelines for one final time as the program’s coach.

Sanders is set to depart the SWAC for an FBS level program, after he opted to take the job at Colorado.

Head coach Deion Sanders of the Jackson State Tigers after the end of 2nd half of the Celebration Bowl against at Mercedes-Benz Stadium on December 17, 2022 in Atlanta, Georgia. (Photo by Paras Griffin/Getty Images)

The North Carolina Central Eagles beat the Sanders-led Tigers 41-34 in a thrilling overtime game inside of Mercedes-Benz Stadium.

Central quarterback Davius Richard help lift the Eagles to victory with a 1-yard score in overtime. Richard ran for 97-yards and had two touchdowns on the day. It was then up to the Eagles’ defense which made a goal-line stand to secure the win.

Sanders return was a homecoming of sorts. Atlanta is the city where he made his NFL debut with the Atlanta Falcons. The place where he became the sensation known as “Primetime.”

“We only here in Atlanta for one thing and it ain’t to go to Magic City,” Sanders jokingly remarked on Friday, “It’s to win a football game.”

Jackson State entered the contest with a 12-0 record, but Saturday’s loss marked the second straight defeat in the Celebration Bowl a game that has been dubbed as the “HBCU football national championship.” 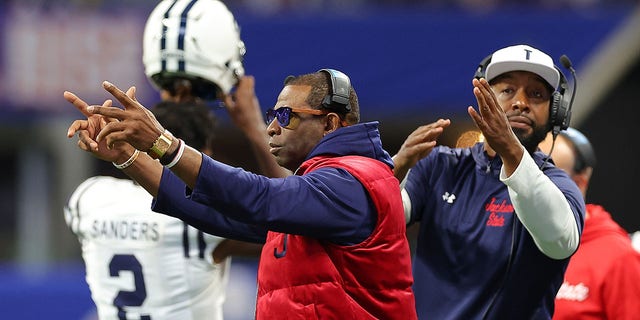 Head coach Deion Sanders and T.C. Taylor, the next head coach of the Jackson State Tigers, work the sideline against the North Carolina Central Eagles during the first half of the Cricket Celebration Bowl at Mercedes-Benz Stadium on December 17, 2022 in Atlanta, Georgia. (Photo by Kevin C. Cox/Getty Images)

“I feel like we’ve won, but we didn’t win that game,” said Sanders after the loss. He will now turn his attention to leading the Colorado Buffalos football program.

Sanders was visibly emotional as he addressed his team for one last time before the game. His emotions still ran high after the game with Sanders saying, “I miss these guys already. I love them.”

The game made it to overtime after Tigers quarterback Shedeur Sanders threw a 19-yard touchdown pass to Travis Hunter as time expired in regulation.

Jackson State’s kicker Alejandro Mata’s extra point tied the game at 34-all. Sanders had an impressive day, with four touchdowns in the air and one on the ground.

ESPN HOST CRITICIZES DEION SANDERS FOR LEAVING HBCU FOR BIG PROMOTION: ‘HE SOLD A DREAM AND THEN WALKED OUT’

Eagles coach Trei Oliver said he hopes the win gives more respect to his team and their conference after the pregame spotlight was almost solely focused on “Coach Prime.”

“They had a chip on their shoulder,” Oliver said of his players. “The disrespect was real since we’ve been down here.” 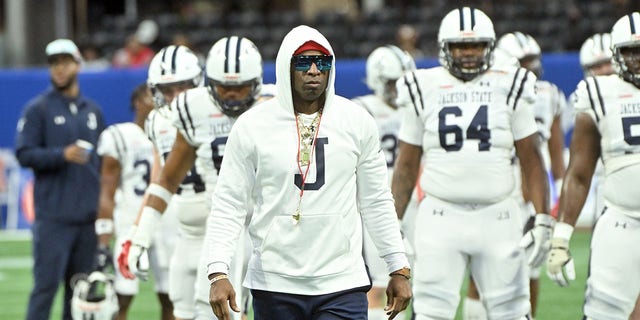 Head coach Deion Sanders of the Jackson State Tigers walks the field during pregame warmups prior to the Cricket Celebration Bowl against the North Carolina Central Eagles at Mercedes-Benz Stadium on December 17, 2022 in Atlanta, Georgia. (Photo by Paras Griffin/Getty Images)

Richard passed for 177 yards with a touchdown and ran for 97 yards and two scores. Richard showed his versatility on a three-yard drive for the game’s first touchdown. He had a 21-yard run, a 30-yard catch on a trick play and a 5-yard scoring run that gave the Eagles a 10-0 lead.

“When I threw the ball, all I’ve got to do is put air under it, he’s going to do the rest,” Sanders said of Hunter.

NFL Commissioner Roger Goodell was spotted at the Celebration Bowl. He was there to watch and support his nephew Charlton “Charlie” Goodell, a defensive lineman who plays for Sanders. Charlie is the adoptive son of Roger Goodell’s brother.

After the game Jackson State linebacker Aubrey Miller shared his thoughts on HBCUs.

North Carolina Central starts their 2023 campaign against North Carolina A&T on Sept. 3. Wide receivers coach T.C. Taylor has been selected as Jackson State’s next head coach. Jackson State will return to Atlanta in 2023 to kick off their season against South Carolina State in the MEAC-SWAC Challenge.

For Sanders, his impact at Jackson State shined a light on college football outside the FBS programs. But his legacy could ultimately be defined by what happens at HBCUs as a whole after he leaves.