Dolphins’ Tua Tagovailoa expected to be discharged from hospital, travel back to Miami after scary injury

Hours after being taken off the field on a stretcher with head and neck injuries, Tua Tagovailoa is expected to be discharged from the hospital and likely travel back to Miami with the Dolphins on Thursday night, according to the Amazon Prime Video broadcast and the team.

Tagovailoa suffered the injuries in the second quarter of the Miami Dolphins’ game against the Cincinnati Bengals after getting sacked by Bengals’ Josh Tupou.

Tagovailoa was on the turf for several minutes before being taken off and sent to the hospital.

The Dolphins would later give an update on his condition, saying he is conscious and has all movement in his extremities. The team confirmed he was expected to be discharged from the hospital and fly home with the team.

Quarterback Tua Tagovailoa of the Miami Dolphins warms up before a game against the Cincinnati Bengals at Paycor Stadium Sept. 29, 2022, in Cincinnati. (Andy Lyons/Getty Images)

The Dolphins QB suffered an injury last week that many at first believed to be a concussion. Tagovailoa violently hit his helmet on the turf and tried walking it off but stumbled. He left the game for a bit but apparently passed concussion protocol and returned to action.

Tagovailoa later said his back was hyperextended, which led to his wobbliness. 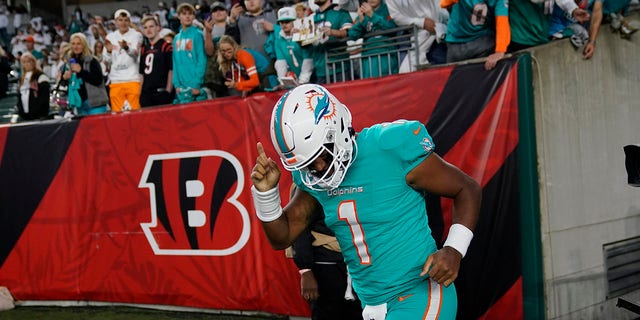 Miami Dolphins quarterback Tua Tagovailoa runs onto the field before a game against the Cincinnati Bengals Thursday, Sept. 29, 2022, in Cincinnati.  (AP Photo/Joshua A. Bickel)

Despite Tagovailoa claiming he didn’t suffer a concussion and the team claiming he passed protocols, the fall on Sunday was enough for the NFLPA to initiate an investigation into the protocols the Dolphins said they were “happy to comply” with. 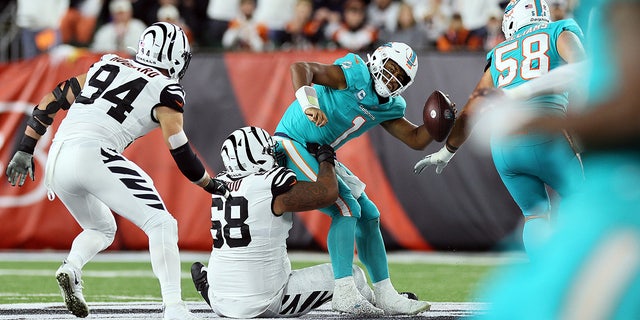