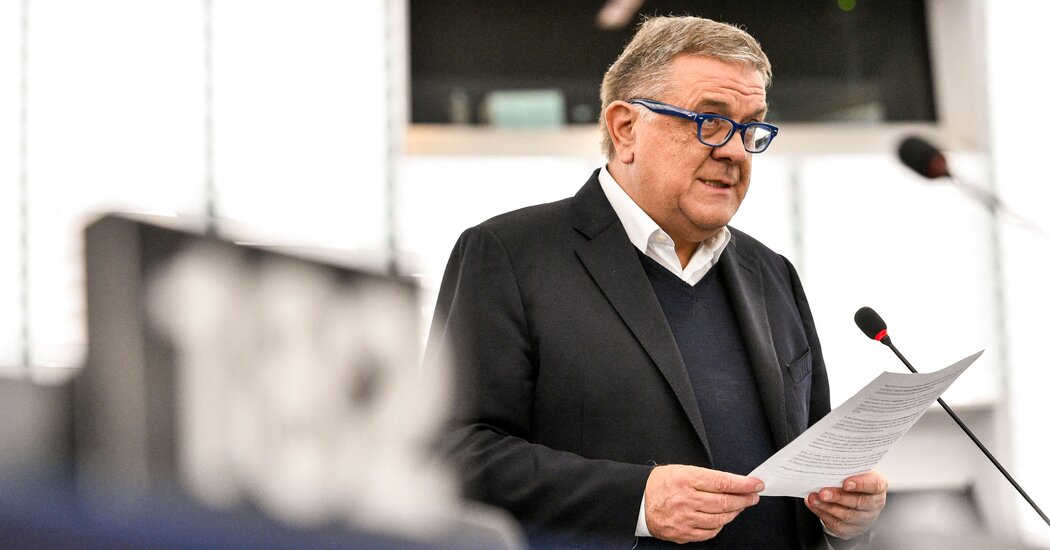 A former European lawmaker described as key to an alleged cash-for-influence operation by Morocco and Qatar has signed an agreement with the Belgian authorities.

A former lawmaker at the heart of the European Parliament corruption scandal has reached an agreement with the Belgian authorities to trade detailed information in return for a lighter sentence, the latest twist in the blockbuster case, the prosecutor’s office said Tuesday.

The lawmaker, Pier Antonio Panzeri, an Italian who sat in the Parliament from 2004 to 2019, is one of four people who have been in the custody of the Belgian police since their arrests last month in the biggest corruption scandal ever to hit the E.U. institution. They are accused of taking payments from Qatar and Morocco.

Under the deal, Mr. Panzeri pledged to “make substantial, revealing, truthful and complete statements” about the operational details of the corruption network, financial arrangements with the third countries and the identity of other people involved, the prosecutor’s office said in a statement.

Mr. Panzeri and the other defendants stand accused of accepting cash to influence lawmakers to act favorably toward from Qatar and Morocco, which have both denied wrongdoing.

Mr. Panzeri, 67, had been cast as the central character in the case by the Belgian authorities, who present him as a criminally entrepreneurial former politician who used his connections and influence to advance dodgy deals.

Mr. Panzeri and the other defendants — who include a ranking member of the Parliament and a former aide to Mr. Panzeri — have been charged with forming a criminal organization, corruption and money laundering.

The Belgian police have said that they had been looking at Mr. Panzeri and the others for more than a year, and that the Belgian secret service, acting on a tip, had found hundreds of thousands of euros in cash in his home during a search in the summer. They put off arresting him to build their case, they said.

On Dec. 9 the police raided Mr. Panzeri’s home and, they say, found a bag with 700,000 euros (about $750,000) in cash. That same day they arrested Eva Kaili, a parliamentary vice president, and her partner, Francesco Giorgi, who had once served as an aide to Mr. Panzeri and was working as an aide to another lawmaker at the time of his arrest.

In all, the authorities say they recovered 1.5 million euros in raids at the suspects’ homes and elsewhere.

Ms. Kaili, through her lawyer, has denied any wrongdoing; Mr. Giorgi has not commented on the charges against him. The two are parents of a 2-year-old child.

Acting on a Belgian warrant, the Italian authorities also arrested Mr. Panzeri’s wife and daughter, who are in custody in Italy awaiting extradition. They both deny wrongdoing.

According to the prosecutor’s statement, Mr. Panzeri agreed on Tuesday to cooperate with the Belgian authorities in exchange for a “limited sentence” that will include prison time, a fine and confiscation of all seized assets, which are worth around one million euros.

If convicted, Mr. Panzeri would have faced 15 years in prison, Belgian legal experts said. Under the deal, his sentence could be reduced to five years and even suspended, depending on the outcome of the negotiations with the prosecutor.

The prosecutors said it was only the second time the Belgian authorities had ever secured this kind of deal — the first was in a 2018 corruption investigation into the Belgian soccer league — and the case has shaken the staid political scene at the heart of E.U. power in Brussels.

On Monday, the members of the Parliament, gathered at a plenary session in the French city of Strasbourg, began the process of lifting the immunity of two other lawmakers at the request of the Belgian authorities, opening the door to more arrests. One of them is another Italian, Andrea Cozzolino, Mr. Giorgi’s employer until his arrest.

The Parliament is the least influential of the three main E.U. institutions governing the 27-nation bloc, but it is the only one that is directly elected by European citizens, and its proceedings and resolutions carry weight, especially when it comes to human rights issues.

Ahead of this year’s World Cup, Qatar is suspected of having tried to embellish its reputation on human rights.

Morocco’s interests may have been more complex. Experts on the Parliament believe that any bribes might have involved not just its human rights record but also the lawmakers’ role in helping approve a trade agreement between the European Union and Morocco.