The 2008 Tampa Bay Rays shocked the world when, after nine last-place finishes in their previous 10 seasons — the first of the franchise’s existence — they won the American League pennant.

The Rays’ payroll was a hair under $44 million that year, the second-lowest in baseball, and they were one of the youngest teams in the league.

Jonny Gomes of the Tampa Bay Rays celebrates with the American League trophy after defeating the Boston Red Sox in Game 7 of the ALCS, Oct. 19, 2008, at Tropicana Field in St. Petersburg, Florida. (Doug Pensinger/Getty Images)

For most of the roster, it was their first postseason appearance.

One member of that team, Jonny Gomes, admitted that the AL East-clinching celebration got a little too rowdy, and actually, almost deadly.

“We don’t even know how to celebrate, that team,” Gomes said on the “Baseball Isn’t Boring” podcast. “Go back and look at the roster. You talk about young and dumb and not even knowing what the hell is going on. Sprinkle in a Carlos Peña, Cliff Floyd, Eric Hinske, that, you know, were babysitters. 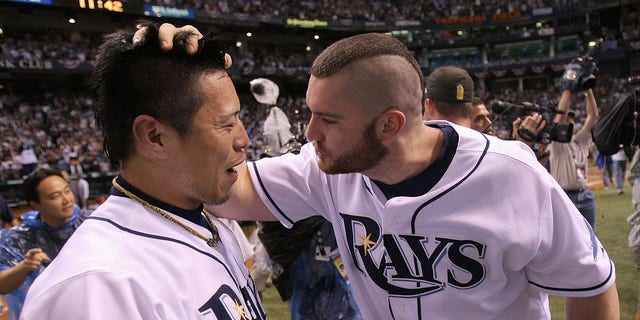 “So, it turns out that my firefighter guys out there, they’re going to be like, ‘Duh.’ That powder or whatever, it sucks oxygen out of the air to put the fire out. So, I literally almost killed the team. Everyone came running out of the shower, and they’re waving their arms, and I’m just blasting them, being like, ‘Yeah, I know! This is so cool, right? Fire extinguisher joke!’ and then I thought we were going to need CPR on a couple of the guys.”

Those Rays lost to the Philadelphia Phillies in five games — host Rob Bradford joked they lost the World Series because they were “half-dead” due to Gomes’ actions. 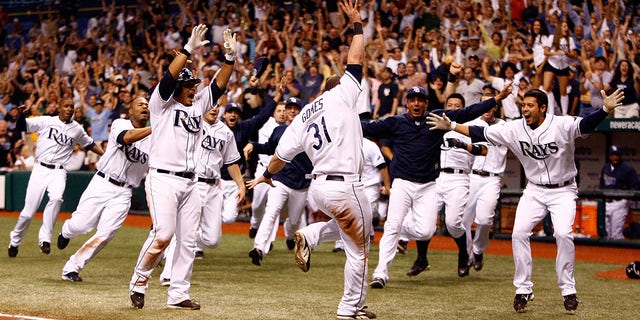 Jonny Gomes (31) of the Tampa Bay Rays scores the winning run in the 11th inning against the New York Yankees, May 13, 2008, at Tropicana Field in St. Petersburg, Florida. (J. Meric/Getty Images)

Gomes won a World Series with the Boston Red Sox in 2013 — he was traded to the Kansas City Royals in time for their title in 2015, but he did not play for them in the postseason.