ATHENS, Ga. – Georgia real estate office manager Debbie Collier was last seen on Sept. 10 — and found dead the next afternoon 60 miles away from home after sending money and a cryptic note to her daughter, according to authorities.

In the following weeks, police gave few updates into the 59-year-old Athens woman’s death, publicly identified no suspect or person of interest and made no arrests.

They served several search warrants, including one at the home of Collier’s daughter, Amanda Bearden, 36, but police revealed nothing about the status of other warrants, subpoenas and crime lab testing.

Anyone with information on Collier’s case is asked to contact Habersham Sheriff’s Investigators Cale Garrison or George Cason at 706-839-0559 or 706-839-0560, respectively.

Below is a timeline of events surrounding her death.

Collier goes missing on Saturday, Sept. 10, after sending her daughter $2,385 over the Venmo app and a cryptic message reading, “They are not going to let me go love you there is a key to the house in the blue flowerpot by the door.”

The Venmo payment comes at 3:17 p.m., eight minutes after Collier leaves a Family Dollar store in Clayton, about 90 minutes north of her home in Athens.

It is her last known stop before her death. Store cameras showed her enter wearing a No. 34 Georgia Bulldogs jersey and purchase several items that were found near her remains — a blue tarp, a red tote bag, paper towels, a torch lighter and poncho.

Her daughter, Bearden, and husband, Steven Collier, report her missing at 6:01 p.m.

SiriusXM Radio contacts the Habersham County Sheriff’s Office to alert deputies that a rented Chrysler Pacifica driven by a missing person has pinged in their jurisdiction.

Investigators find it around 12:30 p.m., parked on the northbound side of Georgia Route 15 in Clarkesville, about 13 miles south of the Family Dollar store. 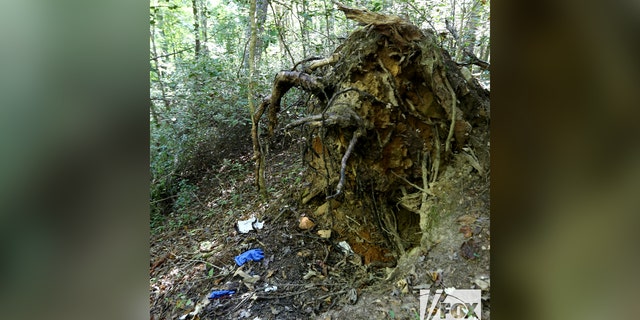 The charred root ball of a tree where investigators found evidence linked to the slaying of Debbie Collier on Sept. 11. (Kat Ramirez/MEGA for Fox News Digital)

The vehicle was “unlocked and unoccupied,” according to an incident report obtained by Fox News Digital.

The scene is still an hour’s drive away from where Collier lived in Athens, but her daughter, Amanda Bearden, arrives “in a hysterical state,” according to police documents. She tells investigators her mother did not suffer from any known mental health issues or “suicidal tendencies.”

She had been given an approximate location of the vehicle by Athens-Clarke County police.

A K-9 unit discovers Collier’s remains down an embankment, a quarter-mile from the vehicle — nude and partially burned, with “charring” on her abdomen and her right hand clutching a tree.

The incident report states she is “obviously deceased,” and investigators quickly identify her as the missing mom, Collier.

Burned remnants of the tarp, paper towels and tote bag are found nearby, as well as a charred base of a fallen tree.

It is unclear what investigators found there, if anything. She lives there with an on-and-off boyfriend named Andrew Giegerich, 27, and the couple has a rocky relationship, with numerous domestic violence calls over the past three years.

Police logs obtained by Fox News Digital show it was one of several warrants served in connection with the investigation, but authorities have revealed few details and declined to release copies of the warrants, citing the active investigation.

DEBBIE COLLIER SPOTTED WITH PURSE, KEYS DESPITE CLAIM SHE LEFT ONLY WITH ID AND DEBIT CARD AS MYSTERY DEEPENS

The Habersham County Sheriff’s Office reveals that investigators have found no evidence of either a suicide or a kidnapping. Detectives serve “several” search warrants and are looking to identify persons of interest. 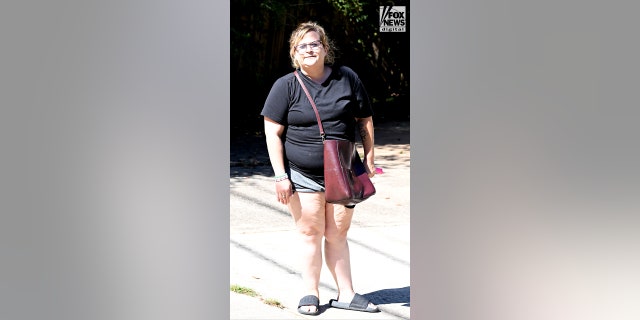 Amanda Bearden is seen outside of her residence in Atlanta on Friday, Sept. 23. Bearden’s mother, Debbie Collier, was the victim of a brutal murder and whose body was found on Sept. 11. (Mark Sims for Fox News Digital)

Collier’s son, Jeffrey Bearden, breaks his silence, praising his mother as a beloved matriarch “filled with joy and beauty” and asking for the public to end speculation about the case and give detectives time to finish their investigation.

“[I] am writing to request respect and privacy during the darkest and most harrowing time for my family,” Bearden writes Fox News Digital. “I have been incredibly hurt and disturbed by some of the reporting and information shared regarding the investigation into my mother’s death.” 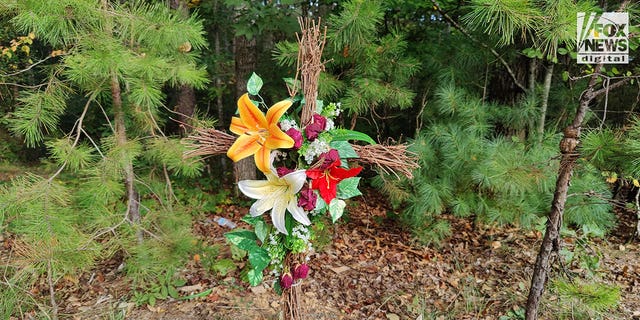 The entrance to the crime scene where Debbie Collier was found dead on Sept. 11 is marked with a makeshift memorial in the shape of a cross. (Mark Sims for Fox News Digital)

Bearden, Collier’s son, says that his mother was the kindest, greatest influence on his life and asked for “respect and privacy” as his family deals with the traumatic news of her murder.

“I will never be able to fully articulate the loss of my mother and what she meant to me,” Bearden said. “She was my longest source of love, support, and encouragement. My mother was a very, vibrant and strong soul. She was a person who valued kindness, empathy, and understanding throughout her entire life. She went through life recognizing the beauty and grace in everything she saw and experienced around her.” 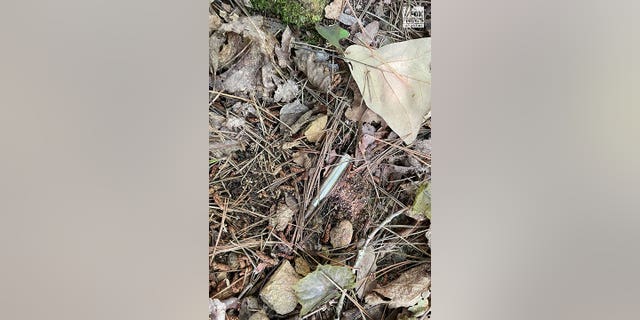 Georgia detectives on Tuesday collected an unfired round near where a K-9 discovered the nude and partially burned remains of office manager Debbie Collier earlier this month. (Michael Ruiz / Fox News Digital)

An unfired round is discovered near the crime scene off Route 15, and Giegerich separately tells Fox News Digital he and Bearden are living in fear, sleeping behind barricaded doors, and had nothing to do with Collier’s unsolved slaying.

“We sleep with stuff in front of our front door and our back door because we didn’t have anything to do with this,” he says. “We’re a little scared ourselves.”

Fox News Digital also discovers an unfired round about 20 to 30 yards uphill from the crime scene, in a public area, and immediately alerts investigators. Detectives from the Habersham County Sheriff’s Office arrive around 15 minutes later and place it into a small evidence bag.

Investigators say it could be unrelated — the area is part of the Chattahoochee-Oconee National Forest where she was found — but there were no clear signs that Collier had been shot. However, authorities suggest it could still be a clue that leads them closer to solving Collier’s gruesome death. 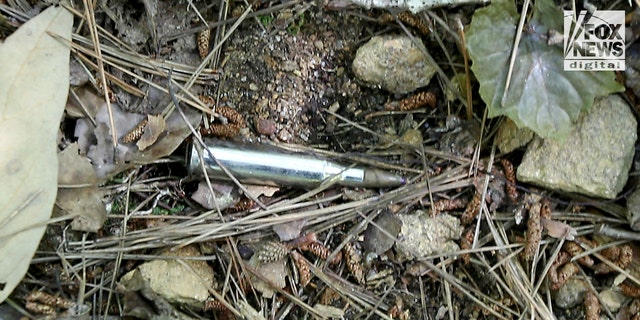 An unfired round discovered 20 to 30 yards from where police earlier this month spotted the remains of Georgia office manager Debbie Collier, who had been partially burned and stripped naked. (Kat Ramirez/MEGA for Fox News Digital)

“That’s an important piece of evidence, and that’s something [one or more suspects] could’ve dropped on the way out the door,” Pat Diaz, a former Miami-Dade homicide detective with more than 30 years on the job, told Fox News Digital.

He said investigators would likely be looking into the possibility that someone forced Collier downhill at gunpoint but used something else to kill her.

“It’s not a recreational hunting round that you would find normally in that area,” he added.

Four 911 calls obtained by Fox News Digital reveal details about the family’s frantic search for Collier on Sept. 10 and 11.

One caller, identifying herself as Collier’s sister Diane Shirley, made an alarming mention of a prior encounter with an unidentified ex-con driving a truck involved in a car crash with the slain woman.

Collier’s husband, Steven Collier, also told the dispatcher that his stepdaughter, Amanda Bearden, found his wife’s purse in the home.

Her daughter also told police she had her mom’s iCloud details and asked them on Sunday morning why they hadn’t been able to trace her mother’s GPS.

“Why hasn’t what I’ve asked been done?” she says, her voice clearly emotional. “Why isn’t the GPS in her van being traced? Do I need a private detective to do that?”

The Habersham County Sheriff’s Office is expected to deliver a public briefing on the Collier case at 9 a.m. ET.