In an appearance on  Sharpton’s MSNBC program,Hochul told the controversial civil rights activist Republicans are wrongly accusing Democrats of overseeing the highest crime rates in their jurisdictions. Hochul referred to “master manipulators” who are also forwarding purported conspiracies to “convince people that in Democrat states they are not safe.”

“Well, guess what? They’re also not only election deniers. They’re data deniers. It’s the Republican states where they have almost no restrictions on guns,” she said.

This argument has been a common refrain of liberal Democrats, as Chicago officials have often blamed less stringent gun laws in neighboring Indiana for incidents that occur in the Land of Lincoln – and it leaves Caldwell outraged

“Al Sharpton should be ashamed of himself to be used like that — knowing that Black people are dying on a daily basis in cities like Chicago, New York, Philadelphia [and] across the country,” he said pn “The Story.” He allowed this woman, the governor of [New York], to come on his show and lie.”

Caldwell nodded to how Sharpton paints himself as a decades-long crusader for the betterment of the African-American community, adding that he allowed Hochul to “gaslight” fellow New Yorkers.

He added that Hochul appears to believe people can’t decide for themselves after watching family and neighbors become victims of violent crime, while she and other liberal officials ignore the fallout from defund-police movements and months of rioting by liberal protesters in cities like New York, Philadelphia, Minneapolis and Los Angeles.

“I am pissed the hell off for what I’m seeing from many of these folks who have caused this dereliction of duty when it comes to the prosecutors, whether it be [Cook County, Ill. District Attorney] Kim Foxx or George Gascon in California or anywhere else,” Caldwell said, 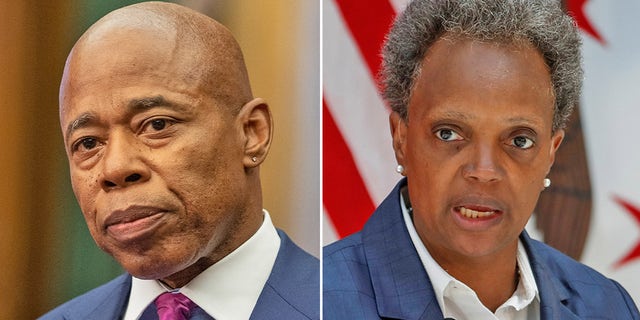 “We need to bring back law and order, and I am happy to see that this is the issue that voters care about because it impacts us all… This is not a black issue. It’s not a Hispanic issue. It’s an issue that America needs to attack head on. And Joe Biden needs to speak out and say that enough is enough and he isn’t doing that.”

Outside New York, Republicans in the Pennsylvania House of Representatives are considering impeaching Philadelphia District Attorney Larry  Krasner, a Soros-linked prosecutor whose progressive criminal justice policies are being blamed for record violent crime there.