How Tom Brady and Gisele Bündchen finalized their divorce under the radar, expert explains

Tom Brady and Gisele Bündchen officially announced their divorce on Friday, after weeks of speculation.

Despite the very public rumors, the NFL star and former supermodel were able to finalize their split under the radar.

According to Katherine Miller, founder of the Miller Law Group, the reason behind why the ex-couple likely did not engage in a public argument has to do with two components: a prenuptial agreement and their steadfast commitment to their children.

“One thing that most people do not realize about divorce is that most divorces settle outside the courtroom and not in one,” Miller explained to Fox News Digital. “For Tom and Gisele, one huge advantage to keeping their divorce negotiations in a conference room rather than a courtroom is to keep their personal business quiet and discreet.  Most certainly, Tom and Gisele had a prenuptial agreement that dictated the division of their assets and minimized what there was to argue about. They surely needed to work out a parenting and custody plan as part of their divorce but they clearly both want what is best for their children.”

TOM BRADY AND GISELE BUNDCHEN’S RELATIONSHIP THROUGH THE YEARS

Miller continued, “From here on out we will see if they continue to work well together or if there are going to be disputes in how they live the agreement they have come to. Perhaps there will be parenting disputes that play out in the press or in the courtroom. However, for the sake of their children, they may continue to work hard to keep those disagreements private.”

The football star and former supermodel both officially announced their divorce in separate Instagram posts on Friday.

The Tampa Bay Buccaneers quarterback and the supermodel had been dodging divorce rumors since the start of the 2022 NFL season. 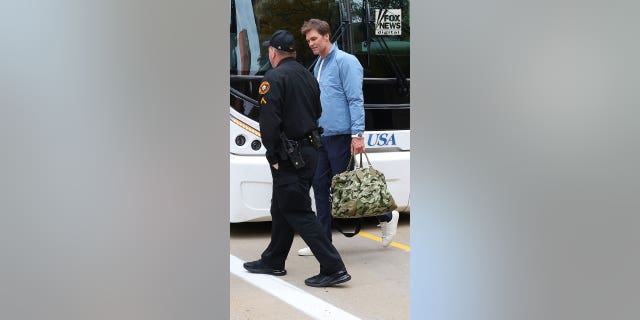 Tom Brady leaves his team hotel Sunday, Oct. 16, 2022 ahead for his game against the Pittsburgh Steelers. The 45-year-old quarterback for the Tampa Bay Buccaneers was seen without his wedding band, two weeks before he announced his divorce from his wife, Gisele Bundchen. (The Image Direct for Fox News Digital)

“In recent days my wife and I finalized our divorce from one another after 13 years of marriage,” Brady wrote on his Instagram. “We arrived at this decision amicably and with gratitude for the time we spent together. We are blessed with beautiful and wonderful children who will continue to be the center of our world in every way. We will continue to work together as parents to always ensure they receive the love and attention they deserve.”

Bündchen also issued her own statement to her Instagram. “The decision to end a marriage is never easy but we have grown apart and while it is, of course, difficult to go through something like this, I feel blessed for the time we had together and only wish the best for Tom always. I kindly ask that our privacy be respected during this sensitive time. Thank you.” 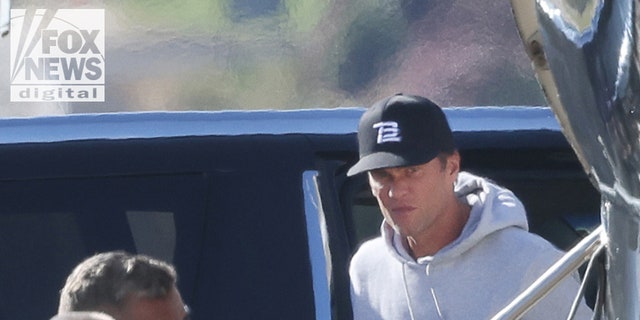 The Super Bowl champion’s representative had no comment to provide Fox News Digital when previously asked about reports that he had hired a divorce attorney.

The two had only been dating for a few months when Bündchen found out Brady’s ex-girlfriend, actress Bridget Moynahan, was pregnant with his child. 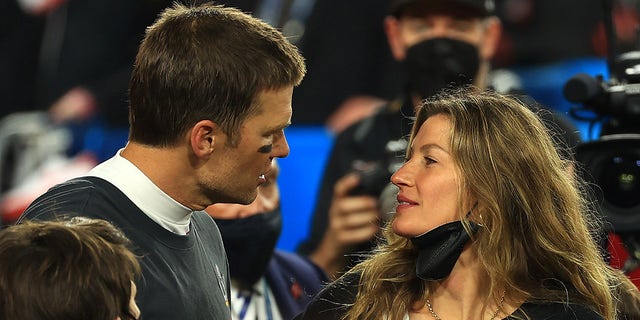 Tom Brady and Gisele Bündchen both took to their Instagrams to announce their divorce Friday. (Mike Ehrmann/Getty Images)

The quarterback, who won six Super Bowl championships with the New England Patriots and then earned another ring with the Bucs, announced his retirement from the NFL in February after 22 seasons. Only 40 days later, he revealed he was coming back to play again.

Bündchen had assumed Brady would have more time to spend with the family following years on the road as the winningest quarterback in NFL history. 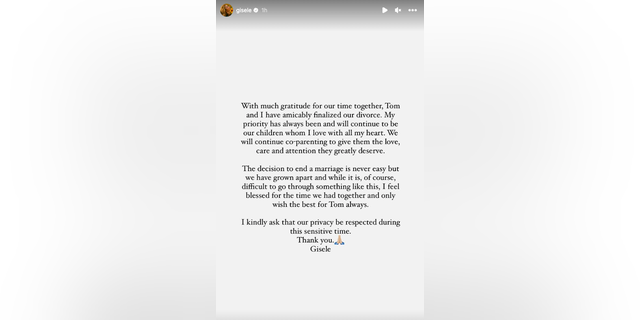 The Tampa Bay Buccaneers quarterback and the supermodel had been fielding divorce rumors since the start of the 2022 NFL season. (Instagram)

“Obviously, I have my concerns — this is a very violent sport, and I have my children, and I would like him to be more present,” she previously told Elle magazine. “I think this is the system we’ve been living in,” she said while addressing sexist commentary that she was desperate for Brady to retire.

“But ultimately, I feel that everybody has to make a decision that works for [them]. He needs to follow his joy, too,” she said.