Several left-leaning media outlets mocked Florida Gov. Ron DeSantis, R., after he called on President Biden and the federal government for help in mitigating the fallout from Hurricane Ian.

DeSantis has been sharply criticized for seeking relief from the storm after opposing a federal aid package for New York and New Jersey following Hurricane Sandy in 2013; then a U.S. Representative, he criticized it as pork-laden.

Far-left MSNBC host Joy Reid mentioned the irony of DeSantis asking for government aid now, when he voted against it while he was in Congress and a member of the Tea Party movement.

At the top of the segment, she downplayed DeSantis’ “executive leadership” in this storm situation, saying all he has to do is “open his arms and receive federal money.”

JOY REID GLOATS OVER DESANTIS’ ASKING FOR BIDEN’S HURRICANE HELP: HE MUST ‘GO HAT IN HAND’ FOR AID

“When Ron DeSantis was in Congress, and you guys were in Congress, when he was a Tea Party freshman, when New York and New Jersey faced the exact same tragedy – I mean literally the subways in New York were flooded, people could have drowned in the subway,” Reid said. “When Ron DeSantis had the opportunity to make that decision and say, ‘well should the people of New York and New Jersey, who were hit by a catastrophic hurricane they weren’t even used to’ [be helped], he said, ‘No, that shouldn’t happen.’”

Reid added that DeSantis is now forced to go “hat in hand” to Biden, and that his plea for help is “antithetical” to his entire ideology that individuals should assume their own risks and “take care of their own lives.”

MSNBC political analyst David Jolly, an ex-Florida congressman, said DeSantis will have to change his “anti-Washington” stance to for his state to recover after Hurricane Ian, and joked he may become a “big-government” Republican.

On MSNBC.com, “The ReidOut” blogger Ja’han Jones also ripped into DeSantis, writing that he has been a “constant menace” to the Biden administration, but now appeared to be “singing a different tune.”

“In just a week’s time, Florida Gov. Ron DeSantis has gone from menacing troll to docile figurehead. Evidently, it takes a natural disaster to put a (temporary) stop to his political terrorism,” Jones wrote.

He later added that Floridians are lucky that Biden doesn’t appear to be as “cruel” as DeSantis, and would have likely received no help if the roles were reversed. 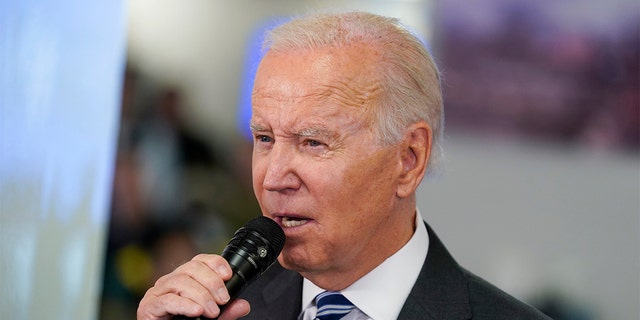 On Tuesday, DeSantis said he is “very thankful” to the president while discussing a recent phone call he had with Biden about federal assistance and preparations for the hurricane.

“We all need to work together regardless of party lines. The Biden administration has approved our request for a pre-landfall declaration and did that very quickly. So we’re thankful for that,” DeSantis said.

On ABC’s “The View,” co-host Whoopi Goldberg reacted to DeSantis’ thankfulness by agreeing that both he and Biden should be working together in order to protect the people of Florida, and thus the U.S.

But co-host Joy Behar interjected and took the opportunity to make light of the dire situation.

“Isn’t this socialism, when the government helps you?,” she asked.

She also said DeSantis could have used the money used to send migrants to Martha’s Vineyard to help with the hurricane.

A New York Times article from Thursday also took aim at DeSantis over his past comment about federal assistance for storm relief.

Writer Matt Flegenheimer said that DeSantis was betting on America’s “better angels” and banking on their “short memory” in asking for federal help. 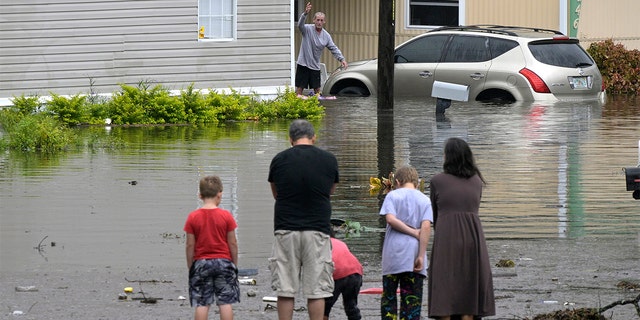 Residents check on one another in a flooded neighborhood in the aftermath of Hurricane Ian, Thursday, Sept. 29, 2022, in Orlando, Florida. (AP Photo/Phelan M. Ebenhack)

Describing DeSantis’ recent thankfulness as “tonal whiplash,” the piece noted DeSantis was one of two Republicans to oppose the Sandy package, but just four years later supported an aid package following a slew of hurricanes that impacted Florida, Texas and Puerto Rico. The piece also said that the storm had forced DeSantis to test a different “gear” with Biden, whom he has repeatedly criticized.

“The present circumstances have inspired a less swaggering posture toward a leader whom Mr. DeSantis has long called ‘Brandon’ as a recurring troll, aimed at the man he might like to succeed,” Flegenheimer wrote.

Writing an entire column in letter format from the perspective of Florida, Cerabino came from the viewpoint of a state begging for forgiveness for past political stunts and scrambling for a federal handout.

“Dear America: Please tread on Florida. I know. I know. This isn’t the message you’ve been hearing from us on the $25 T-shirts for sale on the Gov. Ron DeSantis re-election site,” the columnist wrote. “But we here in Florida are temporarily suspending all criticisms of federal handouts and any other form of socialism. And as for those ‘Don’t Tread on Florida’ T-shirts, ball caps and flags, we’re not in a go-it-alone mood anymore.”

Cereabino joked that perhaps the “outdated-messaged merchandise” could be appropriated as rags for relief workers coming from other states to help Floridians. He added that what Florida really needs at this moment is to rejoin the U.S. to rely on the “all-for-one ethos” of the country, a mantra he claimed the state had “suddenly” appreciated.

Nikolas Lanum is an associate editor for Fox News Digital.