While over the Pacific, the storm had strengthened to a Category 4 storm, and the National Hurricane Center said early Sunday that Roslyn remained “extremely dangerous.”

The storm had maximum sustained winds of 120 mph and was forecast to bring “a life-threatening storm surge and flooding rains to portions of west-central Mexico today,” the hurricane center said.

Forecasters had said Roslyn likely would pass close to Cabo Corrientes and the Puerto Vallarta region during the night, but warned that those areas would still see high winds, heavy rains and rough surf.

This satellite image taken at 15:30 UTC and provided by NOAA shows Hurricane Roslyn approaching the Pacific coast of Mexico, Saturday, Oct. 22, 2022. Roslyn grew to Category 4 force on Saturday as it headed for a collision with Mexico’s Pacific coast, likely north of the resort of Puerto Vallarta. (NOAA via AP) 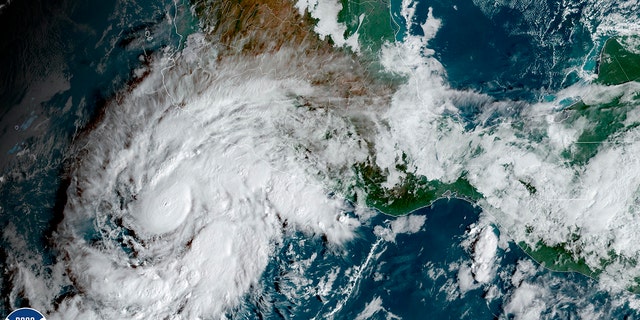 This satellite image taken at 10am ET and provided by NOAA shows Tropical Storm Roslyn approaching the Pacific coast of Mexico, Friday, Oct. 21, 2022.  (NOAA via AP)

The Nayarit state government said the hurricane was expected to make landfall around the fishing village of San Blas, about 90 miles from Puerto Vallarta.

The National Water Commission said rains from Roslyn could cause mudslides and flooding, and the U.S. hurricane center warned of dangerous storm surge along the coast, as well as 4 to 6 inches of rain.