FIRST ON FOX: The owner of a property near the home where four University of Idaho students were slaughtered last month told Fox News Digital he turned over surveillance video showing a white car drive by around the time of the murders.

Moscow, Idaho, detectives reached out to landlord Kane Francetich Nov. 14 and asked for surveillance footage recorded from a camera perched on top of his six-unit rental building on Linda Lane, which is .3 miles from the murder scene.

“I downloaded it and gave them access to everything from 2 a.m. through noon on that Sunday the 13th,” Francetich said.

UNIVERSITY OF IDAHO STUDENTS KILLED: A TIMELINE OF EVENTS

A photo combination of a surveillance camera on Linda Lane and the four University of Idaho students murdered Nov. 13. (Derek Shoot for Fox News Digital/Instagram)

Police have not identified a suspect but are seeking the public’s help tracking down the occupant or occupants of a  white Hyundai Elantra seen near the crime scene around the time of the murders.

Francetich’s rental building and its camera sit on a hill facing Taylor Road, the main street that connects 1122 King Road to Highway 95, the route the killer may have taken upon fleeing.

The car, which Francetich described as both “white” and “light colored” traveled west on Taylor Road sometime between 2:45 a.m. and 3:15 a.m., he said. Only a side view of the car is visible in the footage. 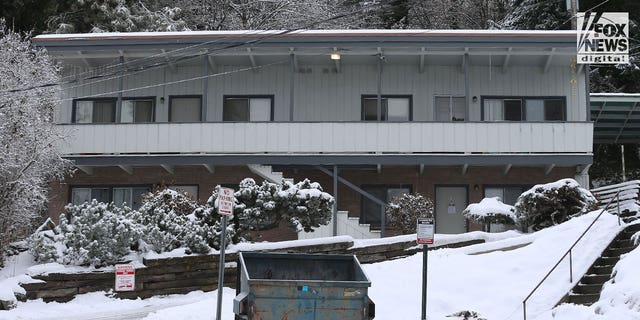 Exterior view of a house on Linda Lane in Moscow, Idaho, Dec. 15, 2022. Investigators requested footage from a surveillance camera at this home in their search for clues in the Nov. 13 quadruple murder. (Derek Shook for Fox News Digital)

Investigators told Francetich they planned to run the video through “their special analysis tools” to enhance the image.

It’s unclear if the white car in Francetich’s footage is the same Hyundai Elantra police are trying to track down.

“You had early interest in this white four-door sedan. It seems like [the landlord’s footage] may be additional supporting evidence for the vehicle police are seeking if the FBI enhancement determined that it’s the Hyundai Elantra,” retired NYPD Det. Herman Weisberg told Fox News Digital. He added that the footage may have been the source of the original Hyundai lead.

“Investigators are looking at it along with other things we’ve received from the public,” Moscow police spokeswoman said of Francetich’s footage.

The landlor added that he also noticed what looked like a sedan travel west toward 1122 King Road at around 1:45 a.m. then head back toward the highway a few minutes later. 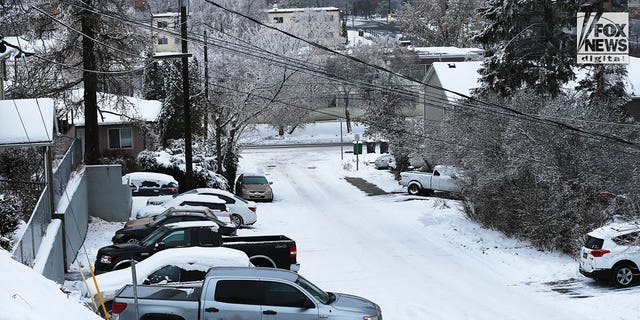 He suspects this may have been the “third-party driver” who dropped Goncalves and Mogen off before the slayings.

Francetich declined to share the footage or screenshots of the vehicles.

On Tuesday, police retrieved surveillance footage from a gas station one mile from the crime scene that shows a white four-door sedan drive by at 3:45 a.m. the morning of the killings.

Police said they have identified 22,000 registered 2011 to 2013 white Hyundai Elantras that match their search criteria. 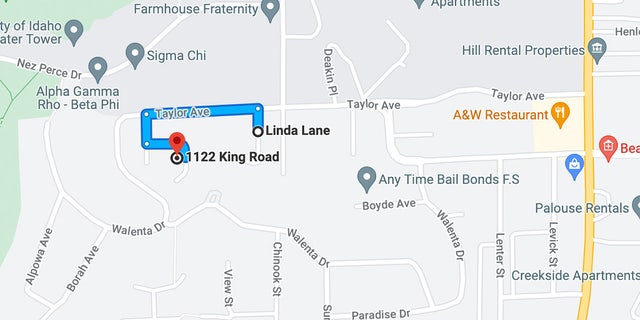 A map showing the route from 1122 King Road along Taylor Road to Linda Lane, where a security camera captured vehicles on Taylor Road Nov. 13 around the time of the murders. (Google maps)

“It’s a horrible thing,” said Francetich, who lives in town. “We’re in a community that’s extremely safe. It’s unusual and scary when something like this happens — especially when they don’t capture the suspect right away.”

Authorities are asking the public to call in tips at 208-883-7180, email tipline@ci.moscow.id.us or submit digital media here.

Audrey Conklin contributed to this report.