Illinois head coach blasts refs after loss to No. 3 Michigan

The Illinois Fighting Illini were on the verge of a massive upset in the Big House against No. 3 Michigan, forcing the Wolverines to convert a 4th and 3 with a minute to go, by far their most important play of the season.

The Wolverines’ College Football Playoff hopes were riding on the play. They got the first down, but it can certainly be argued they ran an illegal pick play.

Illinois was called for a defensive pass interference a play later to set up Michigan’s game-winning 35-yard field goal.

Head coach Bret Bielema of the Illinois Fighting Illini protests a call during a game against the Purdue Boilermakers at Memorial Stadium Nov. 12, 2022, in Champaign, Ill.  (Michael Hickey/Getty Images)

“I’m extremely pissed off. Very angry. Very upset,” Bielema told reporters, via CBS Sports. “I think our kids did a lot to win the football game and to continually just have things go against us, very frustrated. You’ve got to stand up for your people that you believe in. I believe in our locker room big time, and I know that they’ll rise up to the challenge once again.”

Bielema also took to Twitter to throw shade at the refs.

“We will work all week in practice to defend this play especially on 4th down,” he said in a tweet in which the controversial fourth down conversion is shared.

Illinois entered the fourth quarter with a 17-10 lead but allowed three unanswered field goals in the fourth.

Michigan improved to 11-0, setting up a must-watch game against No. 2 Ohio State next week in Columbus. It’ll be the first time the two teams face off as undefeated squads since 2006, a game dubbed the “Game of the Century,” which ended in a 42-39 win for the Buckeyes at home. 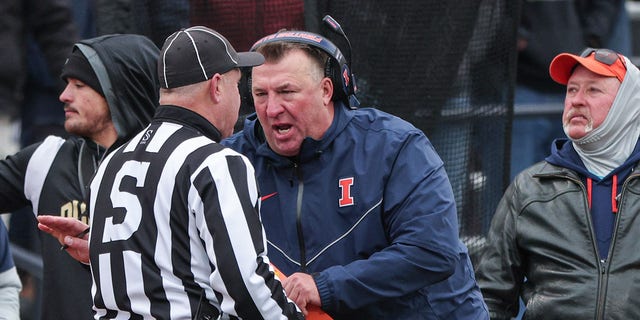 Head coach Bret Bielema of the Illinois Fighting Illini protests a call during a game against the Purdue Boilermakers at Memorial Stadium Nov. 12, 2022, in Champaign, Ill.  (Michael Hickey/Getty Images)

The Illini fell to 7-4 and 4-4 in conference play, one game behind Purdue, Iowa, and Minnesota, making their chance at a Big 10 championship game appearance much more difficult.