In the Philippines, Marcos and Duterte’s Alliance Revives Old Worries 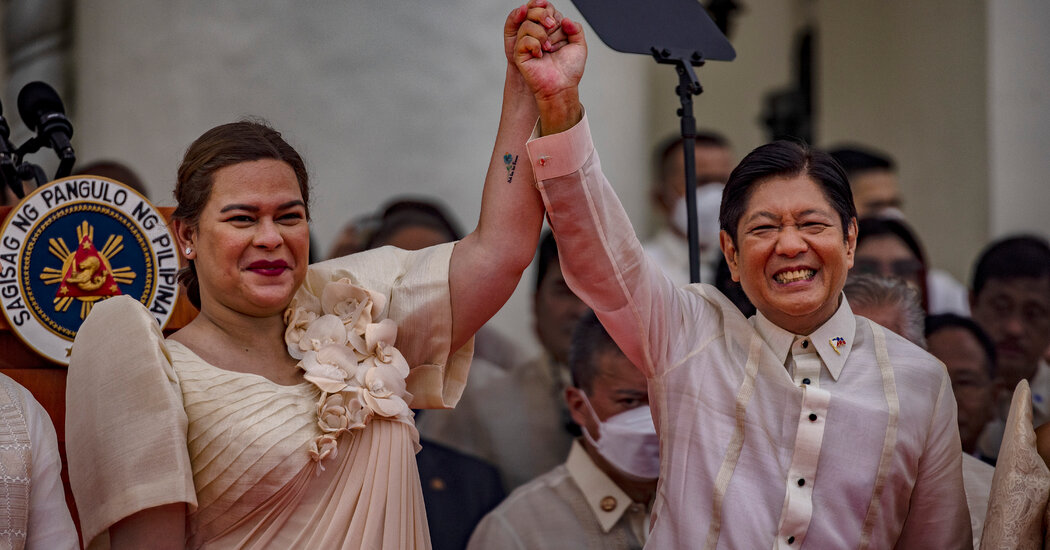 DAVAO CITY, Philippines — When President Ferdinand Marcos Jr. hugged his vice-presidential running mate Sara Duterte at her inauguration in June, it looked like a euphoric moment in the Philippines: two of the nation’s most prominent political families coming together in the name of unity after landslide election victories.

But the fact that she had decided to have her own ceremony separate from his and the behavior of her father, Rodrigo Duterte, the former president, spoke to the tensions near the surface.

As everyone embraced and shook hands with his daughter, Mr. Duterte grimaced, tight-lipped and impatient. He stood stiffly next to Mr. Marcos, his successor as president, during a photo op. Rather than hug any of the Marcoses there to congratulate his daughter on her vice-presidential win, Mr. Duterte walked away.

The scene was emblematic of the political balancing act going on in the Philippines, the oldest treaty ally of the United States in Southeast Asia and a key security partner for Washington. Any instability in the country could weigh on future foreign policy decisions amid the Biden administration’s efforts to redouble U.S. ties in the region, where China is increasingly trying to gain influence. Last week, Mr. Marcos visited the country’s leader, Xi Jinping.

Critics have warned that the Marcos-Duterte administration is little more than a marriage of convenience between two notorious families out to protect their own interests. Policy disagreements have already emerged.

Though Mr. Marcos defended Mr. Duterte’s vicious war on drugs, for example, he has taken a much softer approach as president, drawing his country closer to the United States, which Mr. Duterte once called a “lousy” nation.

Ms. Duterte has shown that she will not be an ordinary vice president, a role that typically exists in the shadows of the president. Her budget is already three times the size of her predecessor, Leni Robredo.

Allegiance in the Philippines has long been determined by bloodlines and regional loyalties, with political dynasties jockeying for power and influence. That system was born centuries ago during Spanish colonial rule and later flourished under the Americans, who introduced democratic elections but limited the vote to landowning aristocrats. In that vacuum, family names flourished. Today, up to 70 percent of Congress is made up of just a few families.

Now, all eyes are on the Marcoses and the Dutertes as they try to improve the lives of millions of Filipinos and deliver on the promise of national unity in spite of a political system that has tended to favor factionalism.

“The problem in Philippine politics, historically, is that such a big alliance is hard to maintain,” said Aries Arugay, who studies Philippine electoral politics. “There’s so many interests to take into account, there’s so many mouths to feed. And sooner or later, there will be dissatisfaction and discontent.”

Among the political establishment in the Philippines, no family has embedded itself quite as thoroughly as the Marcoses.

The father, Ferdinand E. Marcos, ruled with an iron fist for more than two decades. The mother, Imelda, was elected four times to the House of Representatives. The younger Mr. Marcos, known by his childhood nickname “Bongbong,” has been the vice-governor and governor of a province, a congressman and a senator. His older sister Imee is a senator, too. His son, Sandro, was elected to Congress last year, and a cousin, Martin Romualdez, is the speaker of the House.

Much of the family’s political authority is based in Ilocos Norte, the Marcos family stronghold. But their influence waned after the fall of the regime in 1986. Years later, the Marcoses found a solution in the Dutertes.

Hailing from the south, Mr. Duterte is considered the most popular president in the Philippines since the Marcos era. Before this year’s election, his daughter, a respected three-time mayor of the southern city of Davao, dominated several polls. The Marcoses began courting her early in the campaign.

In October 2021, three weeks after Mr. Marcos announced that he would run for president, he met with Ms. Duterte in a hotel in Cebu City.

The two politicians hardly knew each other, but Imee Marcos, Mr. Marcos’s sister, and Ms. Duterte were friends. Before the meeting, Ms. Marcos had given Ms. Duterte a folder with arguments in favor of a Marcos-Duterte ticket, according to Mike Acebedo Lopez, a relative of both politicians. On one page, it had a picture of a smiling Ms. Duterte with the title: “The Indomitable Sara. A Narrative of Hope.”

Until that meeting, Ms. Duterte had not seriously considered running for vice president. Intrigued by the proposal, she commissioned surveys focused on her potential. They showed that voters would handily support her in the role. Ten days after the meeting, Mr. Marcos stunned the country by announcing that Ms. Duterte would run for vice president and support his bid for the presidency.

Mr. Duterte later told reporters that his daughter had not consulted him about her plans. He lashed out by calling Mr. Marcos a “weak leader” and a “spoiled child.” The person he had hoped would continue his legacy was his favorite among his four children, Sara.

“We were all shocked,” said Amado Santos Munda Jr., a family friend. “Everybody thought that his daughter will be president because of the surveys. And remember that usually in the Philippines, the president’s children become presidents.”

Ms. Duterte’s spokesman, Reynold Munsayac, said that “some parts” of this account of the meeting in Cebu City were incorrect, but that Ms. Duterte “does not wish to elaborate.” Mr. Marcos’s office did not respond to repeated requests for comment.

Since taking office, Mr. Marcos and Ms. Duterte have worked hard to project a unified political front. Ms. Duterte recently defended the use of the phrase “New Society” in a new textbook referring to the martial law years, brushing off complaints that it was another example of the Marcoses trying to downplay the father’s brutal dictatorship.

Both families have patriarchs accused of human rights abuses and corruption, and are facing multiple legal challenges. So far, they have moved in lock step to protect one another. The administration announced in September that it had rejected a request by the International Criminal Court to continue an investigation into Mr. Duterte’s violent war on drugs. A tax evasion case against Mr. Marcos has been put on hold, though the family still owes billions in unpaid estate taxes to the government.

Ms. Robredo, the main opposition candidate in the presidential race, attracted a groundswell of support from young voters during the election in part for her dedication to rooting out the corruption.

Fearful of Ms. Robredo’s grass-roots movement, the Estradas and the Arroyos, two former presidential families who were once prosecuted for corruption in the Philippines, backed the Marcos-Duterte ticket. “That is our challenge right now,” said Ronald Mendoza, a former dean of the Ateneo School of Government, referring to political dynasties. “We know that they are not healthy for our democracy, and yet it’s becoming normalized.”

With Mr. Marcos’s backing, Ms. Duterte has been given $2.6 million in funds that were meant for intelligence operations because she says she needs to make schools safer. She has also asked for $41.2 million from Congress for her office.

‘She has a mind of her own’

Few alliances between two families have survived for very long in the Philippines. The last time a powerful alliance fractured was in 1987, when Salvador Laurel, then the vice president, broke with President Corazon Aquino. Their split added to the turmoil that gripped the country after the end of martial law imposed by the Marcos dictatorship.

Several analysts point to Ms. Duterte’s separate inauguration ceremony and Mr. Marcos’s decision to also appoint her education secretary — instead of defense, as she had requested — as a sign of brewing tension. Ms. Duterte told a Times reporter that she was not disappointed with the job Mr. Marcos gave her, saying “the defense portfolio was a discussion we had before we became a tandem.”

Straight talking and charismatic, the 44-year-old mother of three is beloved among many Filipinos. Before she expressed any interest in running in the presidential election, hundreds of “Run, Sara, Run” groups had formed throughout the country. She clinched the vice-presidential election with the largest majority since 1969, garnering 32 million votes, exceeding the 31 million votes earned by Mr. Marcos. As an army reserve colonel, she almost certainly has the loyalty of the military.

Leni Hernandez, Ms. Duterte’s high school teacher, described her as “headstrong.” “That’s one thing I’m sure that she’ll carry as vice president,” she said. “You cannot dominate her.”

At times, Ms. Duterte has even defied her father. When he was president, she branched out to form her own regional political party, with many senior politicians flying to Davao to gain her support. When her father asked her to endorse his right-hand man for president in the election, she rebuffed him.

Ramon Beleno III, a political science professor at the Ateneo De Davao, said Mr. Marcos’s decision to deny Ms. Duterte the defense portfolio suggested that he was concerned about giving her a more crucial role. “Then she might end up overshadowing him,” he said.

Experts say Ms. Duterte could position herself as a strong candidate for the presidency in 2028, when Mr. Marcos’s term ends. In her first 100 days in office, she has established satellite offices in key cities across the Philippines, the first for a vice president. She has met more than a dozen diplomats, including China’s Foreign Minister Wang Yi.

People who know her say the Marcoses will have to tread lightly. “Sara is very kind but do not provoke her because she can be a tiger,” said Salvador Panelo, Mr. Duterte’s lawyer who represented the daughter after she punched a sheriff in Davao for disobeying government orders. Mr. Panelo said that before midterm elections in 2025, Mr. Marcos needed to follow through on any promises that he had made to the Dutertes during the campaign.

“If not,” he warned “within three years, they might be at each other’s throat.”