Joshua Primo, Spurs lawsuit: Gregg Popovich ‘wanted to do right’ by accuser and other shocking claims

Former San Antonio Spurs guard Joshua Primo and the organization face a lawsuit from a former team psychologist who claims the player exposed himself to her numerous times and that team officials failed to do enough to stop it.

Dr. Hillary Cauthen, a licensed clinical psychologist, filed the lawsuit in Bexar County District Court in Texas and is being represented by Tony Buzbee, the attorney who represented women who accused Cleveland Browns quarterback Deshaun Watson of sexual assault.

The Spurs released Primo Friday, and he said at the time he had “been seeking help to deal with previous trauma I suffered and will now take this time to focus on my mental health treatment more fully. I hope to be able to discuss these issues in the future so I can help others who have suffered in a similar way. I appreciate privacy at this time.”

The accusation that Primo exposed himself to Cauthen became public Saturday. Primo’s lawyer, William J. Biggs II, denied the allegations, saying his client “is now being victimized by his former team-appointed sports psychologist, who is playing to ugly stereotypes and racially charged fears for her own financial benefit.”

Spurs Sports & Entertainment CEO RC Buford added, “We disagree with the accuracy of facts, details and timeline presented today. While we would like to share more information, we will allow the legal process to play out. Our organization remains committed to upholding the highest standards and will continue to live by our values and culture. 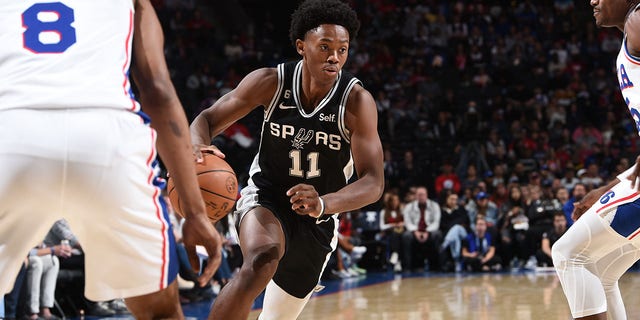 Joshua Primo (11) of the San Antonio Spurs drives to the basket during a game against the Philadelphia 76ers Oct. 22, 2022, at the Wells Fargo Center in Philadelphia. (David Dow/NBAE via Getty Images)

Cauthen started working for the Spurs in September 2021 and began to work with Primo individually once he joined the team, according to the lawsuit. Their meetings usually took place in private medical training rooms at the Spurs’ AT&T Center and in several arenas as part of his pregame routine.

According to the lawsuit, Primo first exposed himself to Cauthen in a session in December 2021 and “such exposures happened on numerous occasions and grew progressively more extreme.” The suit claims Primo’s “behavior went unchecked by the organization’s leadership for many months” even after it was reported.

Cauthen asked to meet with GM Brian Wright in January 2022, but that didn’t happen until March

Cauthen claims she requested to meet with Spurs GM Brian Wright in January 2022, but the conference was postponed several times.

“It was clear Wright was avoiding the meeting, or that the issues to be discussed were not important to him,” the lawsuit states.

“Dr. Cauthen expressed to Wright that she was uncomfortable meeting with Primo alone, and she expressed feelings of confusion, embarrassment and fear,” the suit says. “General Manager Wright promised to develop a plan with regard to Primo for the remainder of the season and said he would explore ‘how to navigate’ the situation in general. The two also discussed the possibility of meeting with Primo and his agent to address his concerning behavior.”

Cauthen was asked to meet with Primo again 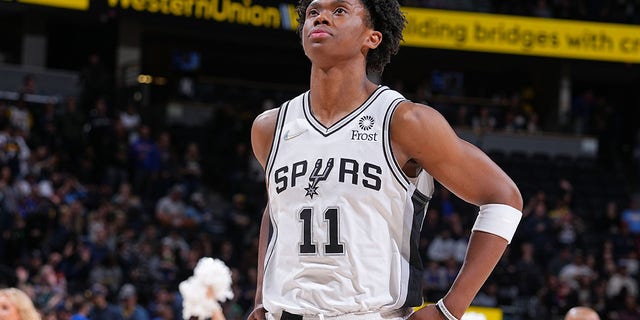 Joshua Primo of the San Antonio Spurs during a game against the Denver Nuggets April 5, 2022, at the Ball Arena in Denver, Colo. (Bart Young/NBAE via Getty Images)

The lawsuit says Cauthen was asked to meet with Primo again despite expressing her concerns. The two met publicly, but Primo allegedly “exposed his penis” in the meeting, and Cauthen cut the session short. The suit says Primo “requested at least one other session” with Cauthen, but she avoided it.

Cauthen asked to decide on punishment

Cauthen met with Wright again in April 2022 and expressed her frustrations, and the general manager reportedly asked her “what consequence” she was seeking.

“Dr. Cauthen felt she was not the proper person to decide a course of action, rather that it was the responsibility of the team to address the situation and come up with a proper protocol,” the lawsuit states. “Wright concluded the meeting by letting her know that the organization’s legal team would be in contact with her.” 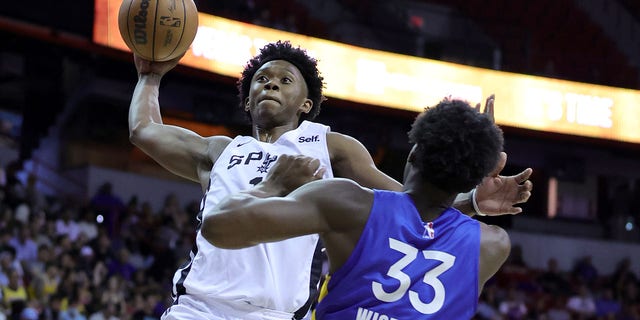 Joshua Primo of the San Antonio Spurs is fouled as he attempts a dunk against James Wiseman (33) of the Golden State Warriors during the 2022 NBA Summer League at the Thomas and Mack Center July 10, 2022, in Las Vegas. (Ethan Miller/Getty Images)

Despite the allegations that were raised to officials in the Spurs front office, the lawsuit says, Primo “would continue to participate in team activities,” and Cauthen was told “that she should not feel uncomfortable because she had seen him repeatedly in the past.”

Cauthen alleges she was told that the organization would understand if she decided not to return to the team’s facilities. Cauthen also refused what was described to her as a “facilitated conversation” with Primo to address the reported behavior. 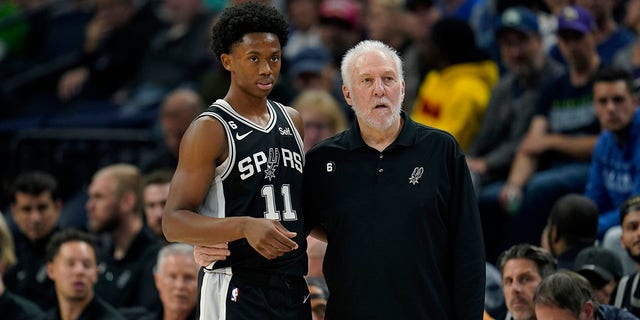 San Antonio Spurs guard Joshua Primo (11) and head coach Gregg Popovich watch play during the first half of a game against the Minnesota Timberwolves Oct. 24, 2022, in Minneapolis.  (AP Photo/Abbie Parr)

The Spurs’ Deputy General Counsel Brandon James and Head of Human Resources Kara Allen told Cauthen that head coach Gregg Popovich “was aware of her complaints and accusations and that he ‘wanted to do right by her.’”

Buzbee said in Thursday’s news conference he wasn’t sure whether Popovich was actually told of the allegations. Popovich hasn’t spoken publicly about the lawsuit.

In June 2022, two months before Cauthen’s contract expired, she and other Spurs members attended a “respect in the workplace” training with the organization “lauding the Spurs culture” as the purpose of the class was to “remain better,” the lawsuit says.

“Staff members joked throughout the seminar about the topics discussed and clearly did not take the matters seriously. In response to some of the laughing reactions of the audience to six important issues, Dr. Cauthen had to take a walk outside to gather herself as she began to experience anxiety and feelings of helplessness throughout,” the lawsuit adds.