Katie Porter berated Irvine mayor in texts: ‘lecture me’ on ‘professionalism’ and ‘see what happens’

Fox News Digital obtained the full text message exchange between Porter and Khan following a fight that broke out at the congresswoman’s July 2021 town hall that saw the man Porter lives with arrested.

In the texts, Porter criticized Khan, saying she would not call the mayor after the arrest of Julian Willis after he allegedly punched a pro-Trump protester, giving the protester a bloody nose.

Fox News Digital previously reported that Porter trashed the Irvine police department after Willis’ arrest, calling the force a “disgrace” and that she “will never trust them again.”

“I see that you’re upset, but it would be more professional of you to just call me for clarification,” Khan said in the text messages exclusively obtained by Fox News Digital.

“I have never done anything to you. You cannot say the same,” Porter wrote. “I have helped you with your campaign and tried to be a good partner. I don’t owe you a phone call.” 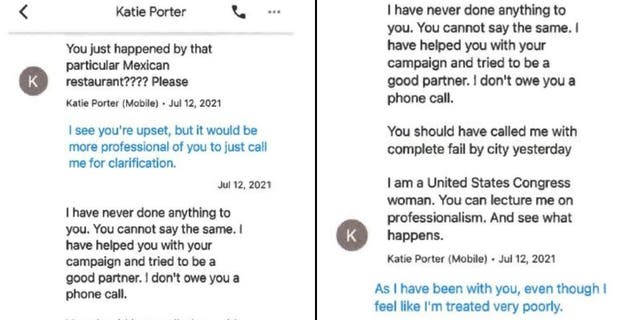 Rep. Katie Porter, D-Calif., lashed out at Irvine Mayor Farrah Khan in one of her texts to her last year saying, “I don’t owe you a phone call” and said, “You can lecture me on professionalism. And see what happens.” (Fox News Digital)

“You should have called me with [the] complete fail by [the] city yesterday,” Porter continued. “I am a United States Congress woman (sic).”

“You can lecture me on professionalism. And see what happens,” Porter added, despite famously wearing a Batgirl Halloween costume to the House of Representatives on the same day Democrats voted for a resolution on ground rules for the impeachment inquiry surrounding then-President Trump. The National Republican Congressional Committee (NRCC) and other Republicans mocked the costume on Twitter.

“As I have been with you, even though I feel like I’m treated very poorly,” Khan responded.

Porter asked Khan to tell her how she has “helped” her, texting “I’m listening” and telling Khan she “can take the advice about Bogarting stuff or not.”

“Up to you. But I am not alone,” Porter wrote. “I am just [the] only one who respects you enough to give you the advice.”

“I have supported you for a very long time in many ways and continue to do so,” Khan responded.

The pair of Democrat officials also sparred over Khan and her executive assistant Cory Allen going to a Mexican restaurant where Porter was eating, with the congresswoman taking aim at the mayor’s reputation and making the barbs personal.

“And the next time I have a high ranking official come, only come to things you are invited to,” Porter wrote. “Stopping by the Mexican restaurant was ridiculous. You have a reputation for not staying in your lane and seeking attention. And the result is we’ll keep things out of Irvine next time.”

“You need to hear this [because] it is damaging others willingness to work with you (sic),” Porter continued. “Tammy, Dave, Santa Ana mayor [Vicente Sarmiento], etc all great. You created stress on staff.”

“That’s quite a leap you’re taking,” Khan fired back. “I’m sorry, but Cory and I were planning on going to the Mexican restaurant that day, when we saw the security vehicles we went somewhere else. I attended all events I was invited to either by Secretary [Marty] Walsh’s staff, [the Orange County Labor Federation], your staff or [Irvine Unified School District].” 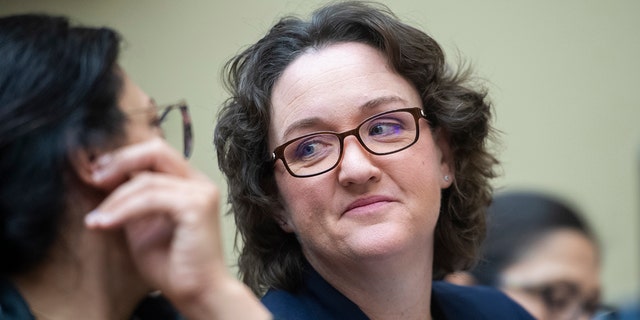 It is unclear what sparked the Mexican restaurant spat between Porter, pictured in the center, and Khan, but it further illustrates the tumultuous relationship between the two California Democrats. (Getty Images)

It is unclear what sparked the Mexican restaurant spat, but it further illustrates the tumultuous relationship between the two California Democrats.

Following the exchange, the pair of Democrats reverted to incredibly formal salutations and communication style, addressing each other by their titles.

Neither Porter’s nor Khan’s offices responded to Fox News Digital’s requests for comment.

In the initial report by Fox News Digital, Porter spokesperson Jordan Wong told Fox News Digital the congresswoman “was upset that a planned family-friendly town hall was hijacked by extremists, who made constituents feel unsafe, including using hateful slurs in front of children.”

“She was disappointed that despite our staff alerting police days before the event that the extremists were openly advertising their intention to disrupt the town hall, officers on the day of the incident were hundreds of feet away and did not intervene immediately when fighting broke out,” Wong said.

“Since then, Rep. Porter and our office have worked productively with the Irvine Police Department, including the Congresswoman hosting the new police chief in her office for a constructive and cooperative meeting,” he continued.

The congresswoman — a former law professor who was paid more than $285,000 one year during her time at the University of California, Irvine — made headlines when it was revealed she earned thousands of dollars in royalty fees from law school textbooks that she required her own students to purchase for the courses she taught.

In 2017, Porter, who is now seeking re-election to the House this November, was paid $286,674 to teach two courses per semester at the institution, according to Transparent California.

Since her arrival in Washington, Porter has campaigned on making education more affordable for Americans and stated in 2020 that the American political system has “favored the wealthy and well-connected for far too long” as “powerful people live in one reality while the rest of us live in another.”

Houston Keene is a politics writer for Fox News Digital.  Story tips can be sent to Houston.Keene@Fox.com and on Twitter: @HoustonKeene