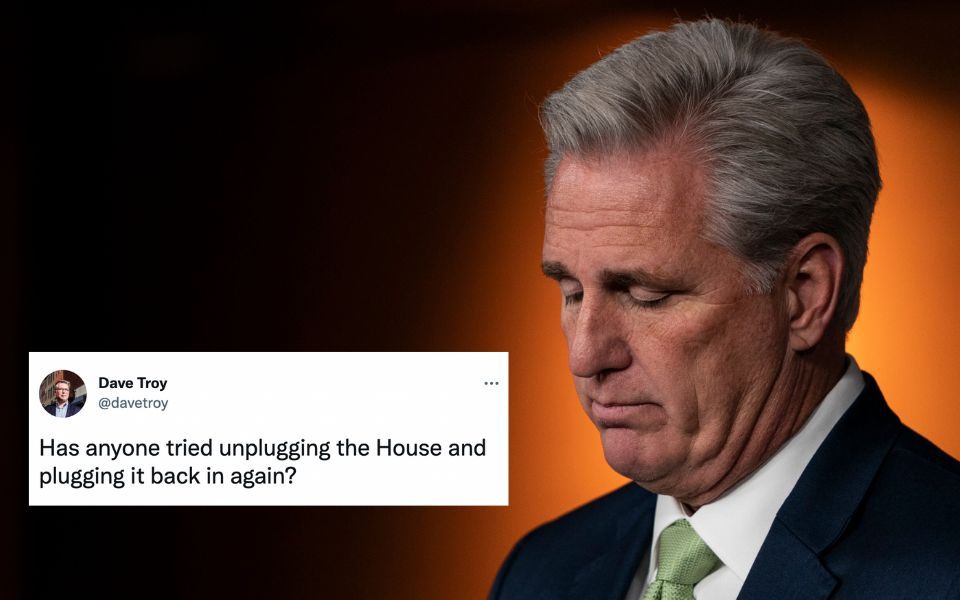 WASHINGTON — Rep. Kevin McCarthy hoped changes to procedure in the House of Representatives could win over the Republicans blocking his path to speaker, but it didn’t work on Thursday.

Three additional rounds of votes revealed nothing new ― the same holdouts who refused to support McCarthy all week are sticking to their guns.

Members of the right-wing House Freedom Caucus have sunk McCarthy in nine straight votes this week, so the California Republican and his allies have been scrambling to mollify them in a series of closed-door meetings.

One idea McCarthy offered overnight would be to empower individual lawmakers to file a “motion to vacate the chair,” forcing what would essentially be a vote of no confidence that could oust the speaker. Another proposal would seat members of the Freedom Caucus on the influential House Rules Committee, according to a source familiar with the discussions.

Rep. Brian Fitzpatrick (R-Pa.), a McCarthy ally, emerged from the speaker’s office Thursday morning, describing the motion to vacate offer as a “clarification” rather than a concession.

“These are discussions over rules that most people don’t even understand,” Fitzpatrick told HuffPost.

Fitzpatrick said he thought they ought to adjourn until next week rather than hold another doomed vote.

The only things that changed Thursday were that Rep. Matt Gaetz (R-Fla.) voted for former President Donald Trump for speaker instead of Rep. Byron Donalds (R-Fla.), while Rep. Lauren Boebert (R-Col.) trolled the House by announcing she’d vote for “Kevin,” except she meant Rep. Kevin Hern (R-Okla.).

The changed votes had no effect on the outcome for McCarthy: more losing.

McCarthy had already offered a bunch of rule changes that failed to mollify the “Never Kevin” group. He had previously proposed to reduce the threshold for a motion to vacate from half the conference to just five members, for example, and for lawmakers to have 72 hours to review legislation before a vote.

But Freedom Caucus Chair Scott Perry (R-Pa.) — who was intimately involved in former President Donald Trump’s attempt to use the Justice Department to overthrow the 2020 election — has said even McCarthy’s proposal for a five-member-driven motion to vacate would shield him from accountability.

Perry and 19 other far-right Republicans joined all Democrats in voting against McCarthy because they want a speaker who will refuse to move any legislation that lacks full Republican support. So if the speaker wants to pass a bill avoiding a government shutdown or federal debt default this year ― which would require cooperation with Senate Democrats ― any Freedom Caucus member could move to throw him out.

It’s not clear whether the rule changes can win McCarthy the votes he needs. The Freedom Caucus thrives on chaos and confrontation.

“We have no exit strategy,” Rep. Ralph Norman (R-S.C.), one of the anti-McCarthy Republicans, told HuffPost on Wednesday evening. “There’s nothing [McCarthy] can give me or any of our members that we are saying that’s a magic number.”

Twitter Brings The House Down With Brutal Kevin McCarthy Jokes