Heavy rainfall triggered a massive landslide early Saturday on the southern Italian resort island of Ischia that destroyed buildings and swept parked cars into the sea, leaving at least one person dead and up to 12 missing.

The body of a woman was pulled from the mud, the Naples prefect Claudio Palomba, told a news conference.

With raining continuing to fall, rescuers were working gingerly with small bulldozers to pick through some six to seven meters (yards) of mud and detritus in the search for possible victims. Reinforcements arrived by ferry, including teams of sniffer dogs to help the search efforts.

Debris are seen on the street, following a landslide on the Italian holiday island of Ischia, Italy, in this handout photo obtained by Reuters on Nov. 26, 2022.  (Carabinieri/Handout via REUTERS)

The force of the mud sliding down the mountainside just before dawn was strong enough to send cars and buses onto beaches and into the sea at the port of Casamicciola, on the north end of the island, which lies off Naples.

Streets were impassable and mayors on the island urged people to stay home. At least 100 people were reported stranded without electricity and water, and about 70 were housed in a community gymnasium.

There was early confusion over the death toll. Vice Premier Matteo Salvini initially said that eight people had been confirmed dead, followed by the interior minister saying that no deaths had yet been confirmed, while 10 to 12 were missing. 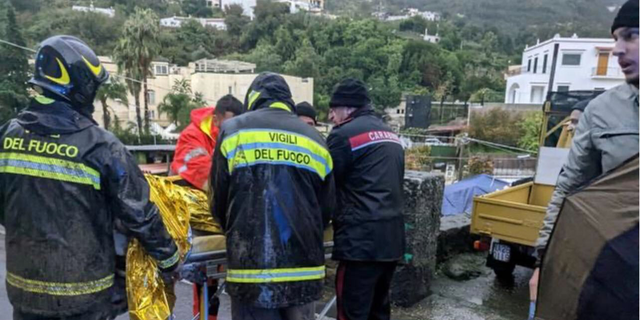 Rescuers help an injured person following a landslide on the Italian holiday island of Ischia, Italy, in this handout photo obtained by Reuters on Nov. 26, 2022.  (Carabinieri/Handout via REUTERS)

“The situation is very complicated and very serious because probably some of those people are under the mud,” Interior Minister Matteo Piantedosi told RAI state TV from an emergency command center in Rome.

ANSA reported that at least 10 buildings had collapsed. One family with a newborn that was previously reported missing was located and was receiving medical care, according to the Naples prefect.

Video from the island showed small bulldozers clearing roads, while residents used hoses to try to get mud out of their homes. One man, identified as Benjamin Iacono, told Sky TG24 that mud overwhelmed three adjacent shops that he owns, completely wiping out his inventory. He estimated damage at 100,000 euros to 150,000 euros ($104,000 to $156,000).

Firefighters and the Coast Guard were conducting search and rescues, initially hampered by strong winds that prevented helicopters and boats from reaching the island. 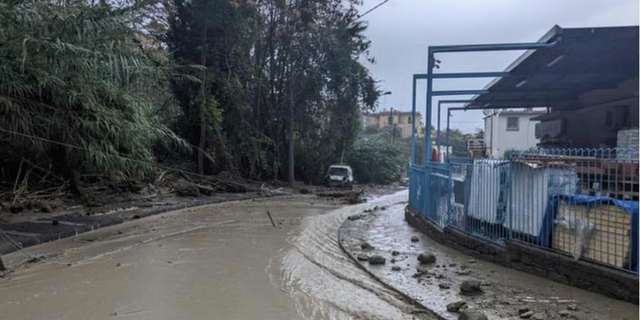 A view shows a street following a landslide on the Italian holiday island of Ischia, Italy, in this handout photo obtained by Reuters on Nov. 26, 2022.  (Carabinieri/Handout via REUTERS)

The densely populated mountainous island is a popular tourist destination for both its beaches and spas. A 4.0-magnitude quake on the island in 2017 killed two people, causing significant damage to the towns of Casamicciola and neighboring Lacco Ameno. Palomba.