But a shocking recording of racist comments by the City Council president has laid bare the tensions over political power that have been quietly simmering between the Latino and Black communities.

Nury Martinez, the first Latina elected president of the Los Angeles City Council, resigned from her leadership role last week, then from the council altogether, after a leaked recording surfaced of her making racist remarks and other coarse comments in discussion with other Hispanic leaders.

Martinez said in the recorded conversation, first reported by the Los Angeles Times, that white Councilmember Mike Bonin handled his young Black son as if he were an “accessory,” and described the son as behaving “parece changuito,” or like a monkey. She also made denigrating comments about other groups, including Indigenous Mexicans from the southern state of Oaxaca, who she termed “feos,” or ugly.

The recording, released anonymously a year after it was made, stunned and hurt many in the Black community, which makes up a little less than 9% of the city’s roughly four million residents. Concerns inside that group, which has long counted on council seats and other city posts in heavily African American neighborhoods, have been growing in recent years as the Latino share of the population has swollen to nearly half and Hispanic politicians have started assuming more high-ranking roles.

Danny J. Bakewell, Sr., the executive publisher of the Los Angeles Sentinel, a Black-run newspaper, wrote afterward of “the cancerous divisiveness that has been secretly harming our progress.”

“To discover that these conversations are a part of the dialogue of the very people entrusted to lead the city of Los Angeles and to realize that there is a plot amongst them to minimize the voice and political power of the Black community makes it even more reprehensible,” Bakewell added.

Los Angeles is no stranger to racial and ethnic tension. 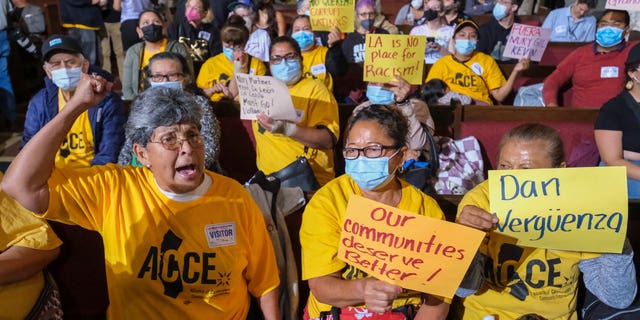 The Watts riots left 34 dead in 1965 after violence broke out following the arrest of an African American man pulled over for drunken driving.

Riots erupted across the city the following year when three of the officers were acquitted on excessive force charges and the jury failed to reach a verdict on the fourth. The rioting lasted six days and killed 63 people, underscoring racial tensions in the city, especially between the Black community and Korean Americans, whose businesses were often targeted.

But Los Angeles also has a history of cooperation among racial and ethnic groups going back to the 1930s, said Manuel Pastor, a professor of sociology and American studies and ethnicity at the University of Southern California. 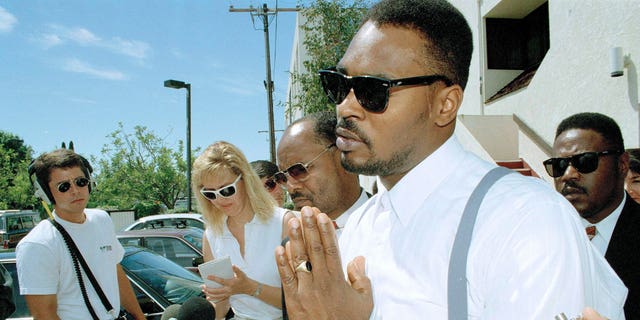 FILE – Rodney King makes a point at a news conference, on June 2, 1994 in Santa Ana, Calif. Jurors who had earlier ordered the city of Los Angeles to pay King $3.8 million for his beating declined to order punitive damages against any of the police officers involved in the March 1991 video taped beating. (AP Photo/Chris Martinez, File) (AP Photo/Chris Martinez, File)

“The kind of sentiments expressed in that conversation do exist in the Latino community more broadly,” Pastor said of the racist comments on the recording. But he said most Hispanics in the city reject that way of thinking.

The now-infamous conversation about frustrations over redistricting maps produced by a city commission was recorded in October 2021. The others present were Councilmembers Gil Cedillo and Kevin de León and Los Angeles County Federation of Labor President Ron Herrera. 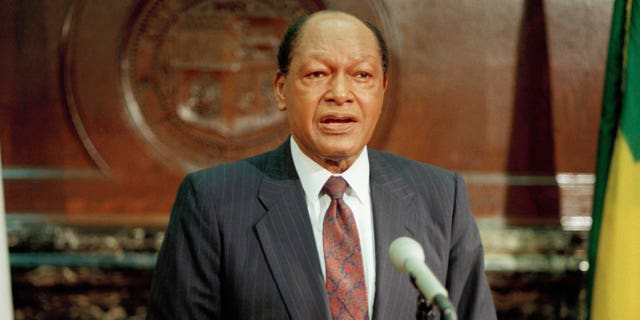 Martinez referred to Bonin, who is gay, as a “little bitch” and De León called Bonin the council’s “fourth Black member.”

It is unclear who recorded the exchange.

For the Rev. Eddie Anderson, the Black senior pastor of the McCarty Memorial Christian Church in Los Angeles, the “horrific statements by the highest officials in local government” were just part of “a plan to dilute the Black vote and power in our community.” 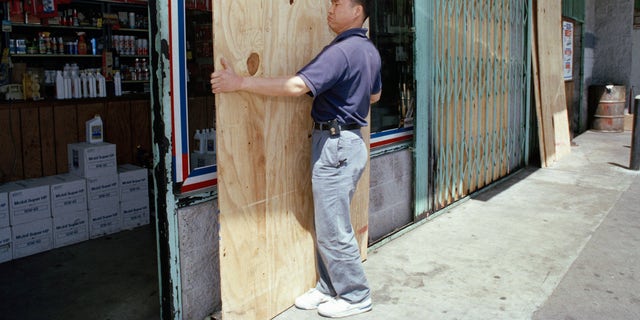 “There was a real plan of Black erasure, of people who have been here a long time building this city,” Anderson said.

The pastor, among those who sat last year on the Los Angeles City Council Redistricting Commission that helped draw the map, noted the recorded conversation was just weeks before final approval.

He said much of the quibbling over redistricting centered on a district that includes parts of south Los Angeles, Koreatown and Baldwin Hills and which elected Tom Bradley, the grandson of a slave, to the council before he was mayor.

Latino leaders around the U.S. denounced the recorded remarks and called for Martinez and the others to resign. 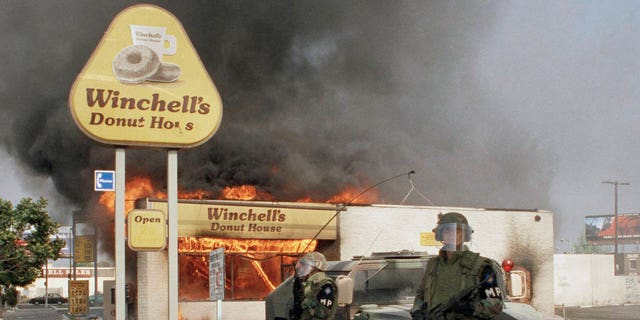 “At a time when our nation is grappling with a recent rise in hate speech and hate crimes, these comments have deepened the pain that our communities have endured,” said Sen. Alex Padilla, who earlier served as the council’s youngest president.

Clarissa Martinez, vice president of the Latino Vote Initiative for UnidosUS, a leading national civil rights organization, said: “our community was deeply offended by the racist and dehumanizing comments made by those four Los Angeles elected and appointed officials.”

“Their being Latino is particularly painful because our community understands what it’s like to be subjected to mistreatment and attempts to diminish our voice,” she added. But she insisted, “We know we are building on something much stronger than the backward behavior of these four people because our communities have a strong trajectory of working together.”

Tanya Kateri Hernandez, professor at Fordham University School of Law, said the idea that people of color are always united ignores colonialism and racial baggage from many different places and generations.

The issue of anti-Blackness in Latino communities in the U.S. and globally is much broader than this one instance, extending to Afro Latinos, Africans and West Indians, said Hernandez, who wrote the book “Racial Innocence: Unmasking Latino Anti-Black Bias and the Struggle for Equality.”

The Los Angeles City Council Redistricting Commission alluded to squabbling among various groups when it submitted its final map a year ago.

“It wasn’t our job to protect elected officials, their jobs, or their political futures,” commission chairman Fred Ali said in a statement. “We hope the Council conducts its deliberations with the same amount of transparency and commitment to equity that this Commission did.”