Wyoming Rep. Liz Cheney praised House Speaker Nancy Pelosi as a “tremendous leader” during an interview on Tuesday, just over a week before the Midterm Elections when Cheney’s replacement will be selected.

“I want to say a word about Speaker Pelosi. Everyone knows she is a liberal from San Francisco [and] I am a conservative from Wyoming, there are many, many issues, maybe most issues, on which we disagree. But I think that she is a tremendous leader,” Cheney said at the City Club in Cleveland with PBS’s Judy Woodruff.

“I’ve watched her up close. She is a leader of historic consequence,” the Republican added.

Cheney said Pelosi first created the House Select Committee to Investigate the Jan. 6 Attack on the U.S. Capitol to show “her commitment to the truth.”

“I think the demonization that goes on both sides — certainly Republicans have, through the years, demonized Speaker Pelosi and Democrats have demonized Republicans including my dad [former Vice President Dick Cheney] — all has to stop,” she continued.

“Violence has become part of our political discourse,” she added while mentioning the recent attack on Pelosi’s husband Paul, describing political violence as “a road we just cannot go down.”

Cheney also condemned those who made light of the attack or jokes about it.

“That’s not who we are in this country,” Cheney said, “that is disgraceful and as Americans, we have to reject it.”

Later on in the interview, Cheney answered a question about how to stop political violence and said individuals should speak out against it, including her fellow Republicans, who she said continued to peddle claims that the 2020 presidential election was “stolen.”

“You cannot give power to people who are willing to excuse what happened and I think it comes down to individual responsibility,” she answered.

BIDEN: ‘I ADMIRE THE HELL’ OUT OF LIZ CHENEY

During the interview, Cheney was asked about the idea of her fellow Republicans taking majorities in the House of Representatives and the Senate — which would allow them to control the respective chambers’ legislative agendas.

“If Republicans do take control of the House, is that among other things a validation of Donald Trump?” asked Woodruff.

The lawmaker said the upcoming election was a “fundamental fight for the soul of our country and not just the soul of the Republican Party.” 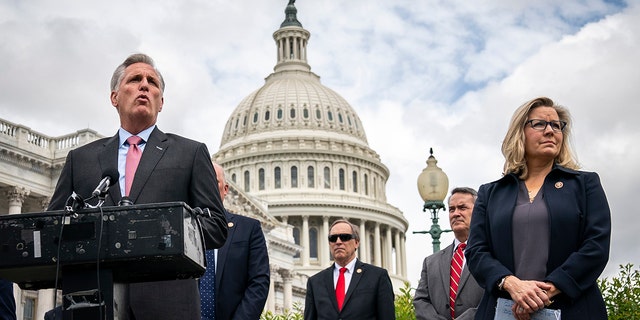 At right, Rep. Liz Cheney, R-Wyom., stands with House Minority Leader Rep. Kevin McCarthy, R-Calif., as he speaks during a news conference outside the U.S. Capitol, on May 27, 2020 in Washington, DC. (Drew Angerer/Getty Images)

“People just need to understand what it will mean to have a Republican majority in the House of Representatives,” she continued. “The people who will be running the House of Representatives in a Republican majority will give authority and power to some of the most radical members of the conference and I don’t think that that’s good for the country.”

With fewer than three months remaining in her congressional term, Cheney has used her final moments in office as a farewell tour mostly consisting of making endorsements for the 2022 races and completing her investigation into the Capitol Riot on Jan. 6, 2021.

“At the end of the day, I’m confident that Donald Trump and those who would thwart our Democratic process will not prevail and I am going to do everything I can to make sure that is the case,” she concluded.