“Thank you to @NassauExec Bruce Blakeman for sending up members of your @NassauOem & NassauPD team to assist Buffalo and Erie County in our time of need,” Erie County Executive Mark Poloncarz tweeted on Monday evening.

Along with his post, Poloncarz was seen posing with members of the Nassau crew in front of a pay loader in Erie County.

The deadly storm caused white-out conditions starting on Friday and into Sunday, with more expected to occur during the overnight hours between Monday and Tuesday.

WINTER STORM KILLS AT LEAST 12 IN NEW YORK, WITH MORE DEATHS EXPECTED TO BE ANNOUNCED

Along with white-out conditions, the storm created treacherous driving conditions and power outages for thousands of residents.

ABC station WABC in New York City reported that the team leaving from Nassau County was expected to be in Western New York until Friday, and if more help is needed, the county executive said he could send another crew. 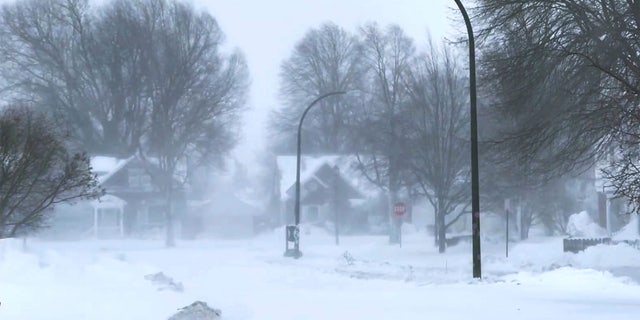 The high wind blows the snow across a neighborhood in Buffalo, N.Y., on Saturday, Dec. 24, 2022 in Buffalo, N.Y. A battering winter storm has knocked out power to 1.7 million homes and businesses across the United States on Saturday. Gov. Kathy Hochul said Saturday that the Buffalo Niagara International Airport will be closed through Monday morning, some roads would be closed through Christmas day and almost every fire truck in Buffalo was stranded in the snow. (.AP Photo/Carolyn Thompson)

The equipment sent to Erie County will likely be used to help crews mobilize through the snow.

Nassau County Emergency management Commissioner Richard Corbett said one vehicle that was sent is an 8-by-8 vehicle that can go on land and water.

The amphibious vehicle will mostly be used to transport and support humanitarian missions, rescuing people from their homes and transporting first responders to hard-to-reach areas.