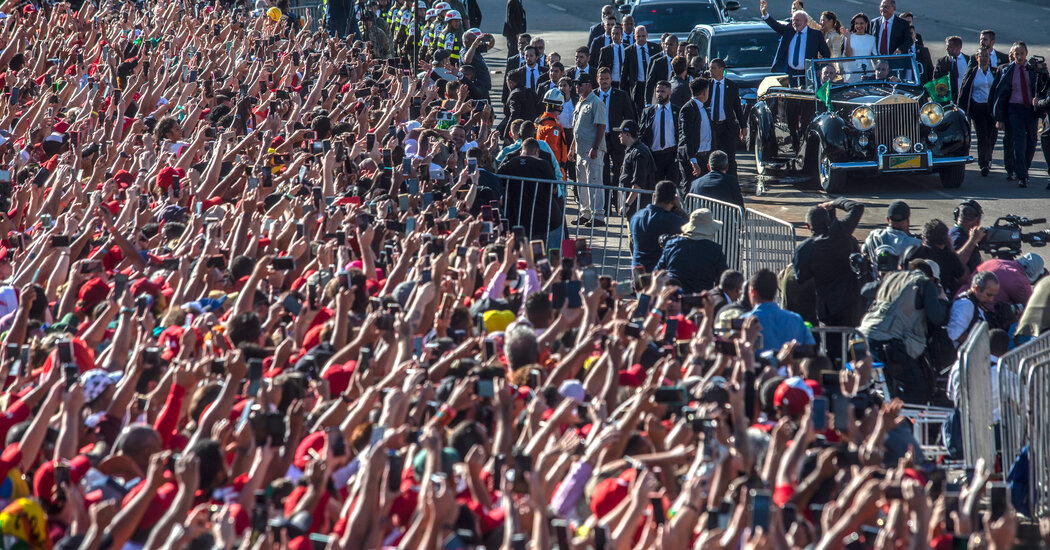 President Luiz Inácio Lula da Silva took the reins of the Brazilian government on Sunday in an elaborate inauguration, complete with a motorcade, music festival and hundreds of thousands of supporters filling the central esplanade of Brasília, the nation’s capital.

But one key person was missing: the departing far-right president, Jair Bolsonaro.

Mr. Bolsonaro was supposed to pass Mr. Lula the presidential sash on Sunday, an important symbol of the peaceful transition of power in a nation where many people still recall the 21-year military dictatorship that ended in 1985.

Instead, Mr. Bolsonaro woke up Sunday 6,000 miles away, in a rented house owned by a professional mixed-martial-arts fighter a few miles from Disney World. Facing various investigations from his time in his office, Mr. Bolsonaro flew to Orlando on Friday night and plans to stay in Florida for at least a month.

Mr. Bolsonaro had questioned the reliability of Brazil’s election systems for months, without evidence, and when he lost in October, he refused to concede unequivocally. In a sort of farewell address on Friday, breaking weeks of near silence, he said that he tried to block Mr. Lula from taking office but failed.

“Within the laws, respecting the Constitution, I searched for a way out of this,” he said. He then appeared to encourage his supporters to move on. “We live in a democracy or we don’t,” he said. “No one wants an adventure.”

On Sunday, Mr. Lula ascended the ramp to the presidential offices with a diverse group of Brazilians, including a Black woman, a handicapped man, a 10-year-old boy, an Indigenous man and a factory worker. A voice then announced that Mr. Lula would accept the green-and-yellow sash from “the Brazilian people,” and Aline Sousa, a 33-year-old garbage collector, played the role of Mr. Bolsonaro and placed the sash on the new president.

In an address to Congress on Sunday, Mr. Lula said that he would fight hunger and deforestation, lift the economy and try to unite the country. But he also took aim at his predecessor, saying that Mr. Bolsonaro had threatened Brazil’s democracy.

“Under the winds of redemocratization, we used to say, ‘Dictatorship never again,’” he said. “Today, after the terrible challenge we’ve overcome, we must say, ‘Democracy forever.’”

Mr. Lula’s ascension to the presidency caps a stunning political comeback. He was once Brazil’s most popular president, leaving office with an approval rating above 80 percent. He then served 580 days in prison, from 2018 to 2019, on corruption charges that he accepted a condo and renovations from construction companies bidding on government contracts.

After those convictions were thrown out because Brazil’s Supreme Court ruled that the judge in Mr. Lula’s case was biased, he ran for the presidency again — and won.

In Brasília, hundreds of thousands of people streamed into the sprawling, planned capital, founded in 1960 to house the Brazilian government, with many dressed in the bright red of Mr. Lula’s leftist Workers’ Party.

Over the weekend, passengers on arriving planes broke into rally songs about Mr. Lula, revelers danced to samba at New Year’s Eve parties and, across the city, spontaneous cries rang out from balconies and street corners, heralding Mr. Lula’s arrival and Mr. Bolsonaro’s exit.

“Lula’s inauguration is mainly about hope,” said Isabela Nascimento, 30, a software developer walking to the festivities on Sunday. “I hope to see him representing not only a political party, but an entire population — a whole group of people who just want to be happier.”

Yet elsewhere in the city, thousands of Mr. Bolsonaro’s supporters remained camped outside the army headquarters, as they have been since the election, many saying they were convinced that at the final moment on Sunday, the military would prevent Mr. Lula from taking office.

“The army has patriotism and love for the country, and in the past, the army did the same thing,” Magno Rodrigues, 60, a former mechanic and janitor who gives daily speeches at the protests, said on Saturday, referring to the 1964 military coup that ushered in the dictatorship.

Mr. Rodrigues has spent the past nine weeks sleeping in a tent on a narrow pad with his wife. He provided a tour of the encampment, which had become a small village since Mr. Bolsonaro lost the election. It has showers, a laundry service, cellphone-charging stations, a hospital and 28 food stalls.

The protests have been overwhelmingly nonviolent — with more praying than rioting — but a small group of people have set fire to vehicles. Mr. Lula’s transitional government had suggested that the encampments would not be tolerated for much longer.

How long was Mr. Rodrigues prepared to stay? “As long as it takes to liberate my country,” he said. “For the rest of my life if I have to.”

The absence of Mr. Bolsonaro and the presence of thousands of protesters who believe the election was stolen illustrate the deep divide and tall challenges that Mr. Lula faces in his third term as president of Latin America’s biggest country and one of the world’s largest democracies.

He oversaw a boom in Brazil from 2003 to 2011, but the country was not nearly as polarized then, and the economic tailwinds were far stronger. Mr. Lula’s election caps a leftist wave in Latin America, with six of the region’s seven largest countries electing leftist leaders since 2018, fueled by an anti-incumbent backlash.

Mr. Bolsonaro’s decision to spend at least the first weeks of Mr. Lula’s presidency in Florida shows his unease about his future in Brazil. Mr. Bolsonaro, 67, is linked to five separate inquiries, including one into his release of documents related to a classified investigation, another on his attacks on Brazil’s voting machines and another into his potential connections to “digital militias” that spread misinformation on his behalf.

As a regular citizen, Mr. Bolsonaro will now lose the prosecutorial immunity he had as president. Some cases against him will probably be moved to local courts from the Supreme Court.

On Sunday, Mr. Lula told Congress that Mr. Bolsonaro could face consequences. “We have no intention of revenge against those who tried to subjugate the nation to their personal and ideological plans, but we will guarantee the rule of law,” he said. “Those who have done wrong will answer for their mistakes.”

It is unlikely that Mr. Bolsonaro’s presence in the United States could protect him from prosecution in Brazil. Still, Florida has become a sort of refuge for conservative Brazilians in recent years.

Prominent pundits on some of Brazil’s most popular talk shows are based in Florida. A far-right provocateur who faces arrest in Brazil for threatening judges has lived in Florida as he awaits a response to his political asylum request in the United States. And Carla Zambelli, one of Mr. Bolsonaro’s top allies in Brazil’s Congress, fled to Florida for nearly three weeks after she was filmed pursuing a man at gunpoint on the eve of the election.

Mr. Bolsonaro plans to stay in Florida for one to three months, giving him some distance to observe whether Mr. Lula’s administration will push any of the investigations against him, according to a close friend of the Bolsonaro family who spoke on the condition of anonymity to discuss private plans. The Brazilian government has also authorized four aides to spend a month in Florida with Mr. Bolsonaro, according to an official notice.

On Saturday, Mr. Bolsonaro greeted his new neighbors in the driveway of his rented Orlando house, many of them Brazilian immigrants who took selfies with the departing president. He then went to a KFC to eat.

Mr. Bolsonaro and his allies argue that he is a political target of Brazil’s left and particularly Brazil’s Supreme Court. They have largely dropped claims that the election was rigged because of voter fraud but instead now claim that it was unfair because Alexandre de Moraes, a Supreme Court justice who runs Brazil’s election agency, tipped the scales for Mr. Lula.

Mr. Moraes was an active player in the election, suspending the social-media accounts of many of Mr. Bolsonaro’s supporters and granting Mr. Lula more television time because of misleading statements in Mr. Bolsonaro’s political ads. Mr. Moraes has said he needed to act to counter the antidemocratic stances of Mr. Bolsonaro and his supporters. Some legal experts worry that he abused his power, often acting unilaterally in ways that go far beyond that of a typical Supreme Court judge.

Still, Mr. Bolsonaro has faced widespread criticism, on both the right and the left, for his response to his election loss. After suggesting for months he would dispute any loss — firing up his supporters and worrying his critics — he instead went silent, refusing to acknowledge Mr. Lula’s victory publicly. His administration carried out the transition as he receded from the spotlight and many of his official duties.

On Saturday night, in his departing speech to the nation, even his vice president, Hamilton Mourão, a former general, made clear his views on Mr. Bolsonaro’s final moments as president.

“Leaders that should reassure and unite the nation around a project for the country have let their silence or inopportune and harmful protagonism create a climate of chaos and social disintegration,” Mr. Mourão said.