Man ‘ran out’ of Halloween candy, handed out possible ‘marijuana gummies’ instead: report

A suburban Chicago man has been arrested after handing out gummy bears to kids on Halloween that may have been contaminated with cannabis after claiming that he “ran out of candy,” according to police and a local report.

Jarod Feilen, 25, was identified as the person who distributed an unknown number of bags filled with gummy bears that smelled of marijuana in South Chicago Heights, FOX32 Chicago reported.

An alert parent and grandparent discovered the suspicious candy and turned the packages over to police, the South Chicago Heights Police Department said. The yellow gummy bears were packaged in wrappers with no branding or print, in clear shrink film over silver foil with a black back panel.

“I was walking down the street and someone commented that someone was handing out black packets of marijuana gummies,” one dad, who wished to remain anonymous, told the station. “I checked my 4-year-old daughter’s bag and yes, I found three packets of gummies that smelled like marijuana.”

During an investigation, the report said that officers identified Feilen as the suspect believed to have handed out the potentially contaminated gummy bears. 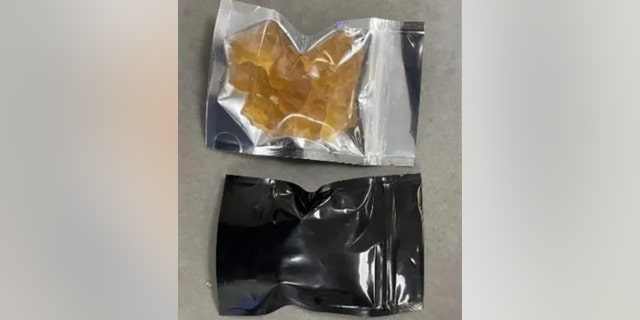 Police sent the gummy bears to a crime lab to test whether the candy was contaminated with cannabis. (South Chicago Heights Police Department)

“He said that he ran out of candy,” Chief William Joyce told the station. “So he had some, some little baggies and he put some of his gummies in there and started distributing them.”

The suspect was arrested and charged with five counts of child endangerment, police said.

Police sent the recovered samples to a crime lab for testing to determine whether there was any contamination.

While the department said it was not aware of any children ingesting the gummies, it asked parents to contact them with any information about the suspicious candy packages.

Police advised parents to seek medical advice if any child had consumed the gummy bears.