Mariners fight back from down seven runs to stun Blue Jays, advance to ALDS against AL West rival Astros

The Toronto Blue Jays were coasting to a win after they were blanked by Luis Castillo and the Seattle Mariners in Game 1 of the wild-card series on Friday.

And then it all came crashing down as the Mariners fought back from seven runs down to stun the Blue Jays and sweep the series to advance to the American League Division Series.

Cal Raleigh of the Seattle Mariners is congratulated by teammates after scoring the go-ahead run against the Toronto Blue Jays during the ninth inning in Game 2 of the American League wild-card series at Rogers Centre on Oct. 8, 2022, in Toronto. (Mark Blinch/Getty Images)

Down 8-1, Seattle loaded the bases in the sixth off Kevin Gausman. After a strikeout and an infield fly, he was taken out to a standing ovation, but Tim Mayza’s first pitch was a wild pitch, scoring a run. His third was a three-run homer by Carlos Santana, and suddenly it was 8-5.

The Jays added a run in the seventh, but in the eighth, the M’s suddenly had the tying run at the plate with no outs. That prompted John Schneider to go with his closer, Jordan Romano, earlier than he wanted, but Romano allowed a single to load the bases for Santana. After striking out the next two batters, J.P. Crawford blooped one into no-man’s land and cleared the bases after George Springer and Bo Bichette collided, tying the game at nine. 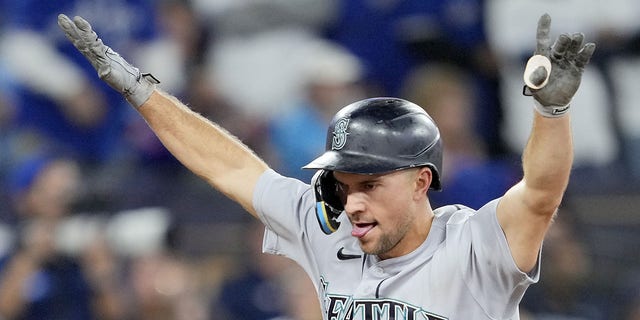 Mitch Haniger of the Seattle Mariners celebrates after scoring against the Toronto Blue Jays during the eighth inning in Game 2 of the American League wild-card series at Rogers Centre on Oct. 8, 2022, in Toronto. (Mark Blinch/Getty Images)

2022 MLB POSTSEASON: EVERYTHING YOU NEED TO KNOW ABOUT THE NEW WILD-CARD ROUND

After the Blue Jays couldn’t get a run in from third base, Cal Raleigh, the man who had sent the Mariners to the postseason with a walk-off homer, doubled with one out in the top of the ninth. Adam Frazier then drove him in with a double of his own to give the Mariners a 10-9 lead.

The Jays put the winning run at the plate after a one-out walk to Matt Chapman, but George Kirby retired his next two batters to end the series.

Teoscar Hernandez homered twice off defending AL Cy Young Award winner Robbie Ray, who won the award as a Blue Jay. Up 4-1 entering the fifth, Seattle’s Paul Sewald loaded the bases (he intentionally walked Vladimir Guerrero Jr.), but a passed ball on a cross-up scored a run. After he walked Alejandro Kirk, he hit Hernandez with a pitch, bringing in another run as boos rained down in Rogers Center. Sewald then allowed a sac fly to Chapman, and then Danny Jansen hit an RBI double.

The Jays thought they were safe, but as Yogi Berra once said: It ain’t over til it’s over.

Both American League Division Series are now set as the Cleveland Guardians will face the New York Yankees after their win in the 15th inning earlier Saturday. 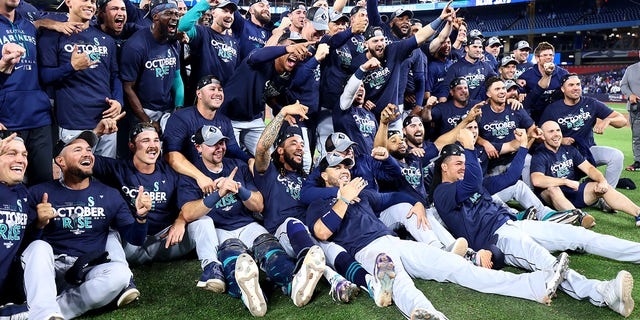 The Seattle Mariners celebrate after defeating the Toronto Blue Jays in Game 2 to sweep the American League wild-card series at Rogers Centre on Oct. 8, 2022, in Toronto. (Vaughn Ridley/Getty Images)

The Mariners went 7-12 against the Astros this year but have not faced them since July 31. Houston won six of the final seven matchups.