A woman says she was assaulted by a protester at an Oct. 29 campaign rally in Detroit for Tudor Dixon, a Republican running for governor of Michigan.

The alleged incident reportedly happened at Armando’s Restaurant in Detroit, where Dixon was campaigning with her running mate Shane Hernandez and ex-Democrat Tulsi Gabbard, who has endorsed Dixon.

Costantino said she was standing nearby when the protester started to approach the stage, screaming loudly. Worried by the woman’s behavior, Costantino attempted to intercept her.

DIVIDED STATE OF MICHIGAN RAISES MANY QUESTIONS ON THIS YEAR’S BALLOT. HERE’S WHAT YOU NEED TO KNOW

“She was acting so chaotic that I was worried she would go after the speakers or something or hurt somebody,” Costantino said.

But the protester resisted and that’s when the alleged biting happened.

“She just bent over and bit me really hard,” Costantino said.

“I’ve never been bit by an adult in my live, or anyone over 5,” she told 7 Action News.

MICHIGAN DAD SENDS MESSAGE TO STEPHEN COLBERT AFTER MOCKERY BY LATE-NIGHT HOST: ‘SHAME ON HIM’ 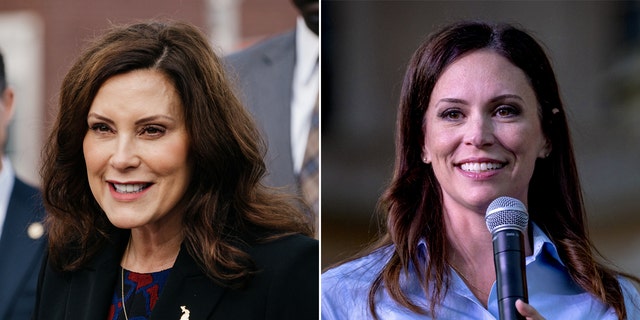 Costantino said the bite left bruises and marks and that her arm swelled up to the point where it was difficult to raise it and uncomfortable to drive.

Linda Sawyer, a witness, said she confronted the protester after restaurant management managed to kick her out.

“I was exiting and she was still by the door and I went to her and I said, ‘You bit Cheryl’ and she said, “Yeah, well,'” Sawyer told 7 Action News. “Like she was proud of it.”

Costantino has filed a police report with the Detroit Police Department, 7 Action News reported. Officials said an investigation has been opened but no one has been charged.

“The Dearborn Public Schools is in the process of conducting an investigation to gather all the facts associated with this alleged incident and determine if there were any violations of board policy,” school officials said.

Costantino, who is also a teacher, said she was bewildered by what happened.

“I don’t understand who would trust someone like that with their children and why would a school open themselves up to liability by keeping an employee who would act like that,” Costantino said.

“It’s not worth going to jail over or getting charges brought against you,” she said. “It’s one thing to fight for what you believe in, but not physically.”

Chris Pandolfo is a writer for Fox News Digital. Send tips to chris.pandolfo@fox.com and follow him on Twitter @ChrisCPandolfo.