President Joe Biden’s administration has set a tentative deal to stop a railway strike that could have devastated the U.S. economy.

Members of the Minnesota Nurses Association (MNA) said Thursday that its members will vote later this month on another possible strike.

The decision to vote on Nov. 30, announced at a press conference, comes more than two months after some 15,000 nurses walked off the job after failing to reach an agreement with the hospitals over staffing and wage issues.

“We have been at the bargaining table for eight long months,” MNA President Mary C. Turner said Thursday. “We have begun to lose faith in the bargaining process … Our hospital leadership has failed us.”

That strike had stemmed from negotiations that began in March. In that period, MNA went to the bargaining table nearly 30 times, according to Turner. They’ve also met nine times since the last strike.

MNA is now arguing that the issues they were highlighting remain unresolved. They say they’ve been asking for hospitals to address short staffing and retention issues, as well as increasing salaries. 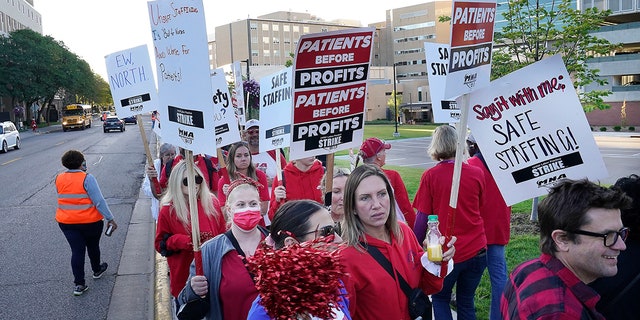 “Everyone in Minnesota talks about the importance of health care. Our nurses cannot continue being understaffed,” Bernie Burnham, president of Minnesota AFL-CIO, said in September. “Patients deserve to be treated in a timely manner with dignity and respect.”

If the MNA vote on Nov. 30 gets a two-thirds majority, union negotiation leaders can call an unfair labor practice strike after giving a 10-day notice to employees.

Allina Health, one of the hospital executives, has a negotiation session with MNA scheduled for Friday. Allina told FOX News Digital it is “willing to engage a mediator to be part of that session.”

“Based on today’s news conference, we will take the union at their word that they are finally ready to participate in meaningful bargaining, rather than continuing to make unsustainable economic demands, resorting to public theater and creating stalemates that ultimately result in unnecessary impacts to those we serve,” Allina said.