No. 11 Oklahoma State scores late touchdown for win over No. 20 Texas

Spencer Sanders threw for 391 yards and hit Bryson Green with the game-winning touchdown pass with just over three minutes left, and No. 11 Oklahoma State defeated No. 20 Texas 41-34 on Saturday.

Green’s 41-yard touchdown came when he caught the ball on a slant, broke out of D’Shawn Jamison’s grasp just inside the 35 and made a move on Jerrin Thompson to break into the open field.

Green had five catches for a career-high 133 yards for Oklahoma State (6-1, 3-1 Big 12), which bounced back from a double-overtime loss to TCU the previous week.

Oklahoma State Cowboys quarterback Spencer Sanders (3) looks to pass during the first half against the Texas Longhorns on Oct. 22, 2022, at Boone Pickens Stadium in Stillwater, Oklahoma. (William Purnell/Icon Sportswire via Getty Images)

Oklahoma State’s Jason Taylor II intercepted two of Quinn Ewers’ passes for the Cowboys, and Kendal Daniels picked off Ewers in the final minute to end the Longhorns’ final threat.

Texas led 31-24 at halftime as both teams gained more than 300 yards before the break.

Sanders’ 10-yard touchdown pass to Brennan Presley and the extra point tied the game at 34 with 9:54 remaining in the fourth quarter, setting up the final frantic minutes. 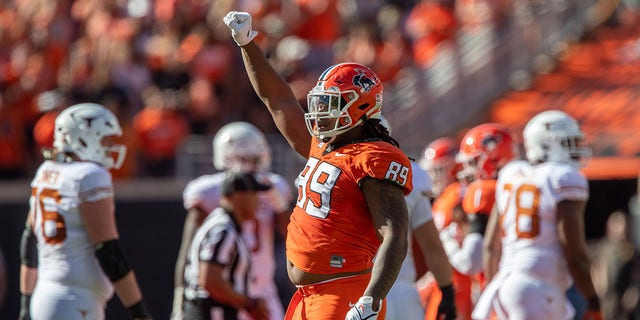 Oklahoma State Cowboys defensive end Tyler Lacy (89) reacts after a play during the first half against the Texas Longhorns on Oct 22, 2022, at Boone Pickens Stadium in Stillwater, Oklahoma. (William Purnell/Icon Sportswire via Getty Images)

Texas: Ewers couldn’t get it going on the road in the second half. The Longhorns had been solid defensively throughout the season, but Oklahoma State made numerous spectacular plays to move the ball. 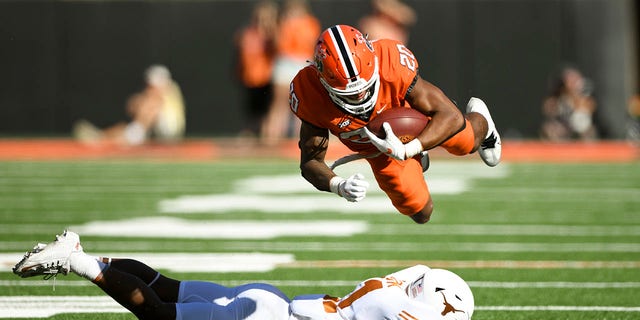 Oklahoma State running back Dominic Richardson (20) launches himself over Texas defensive back Anthony Cook, bottom, during the first half of an NCAA college football game Saturday, Oct. 22, 2022, in Stillwater, Okla. (AP Photo/Brody Schmidt)