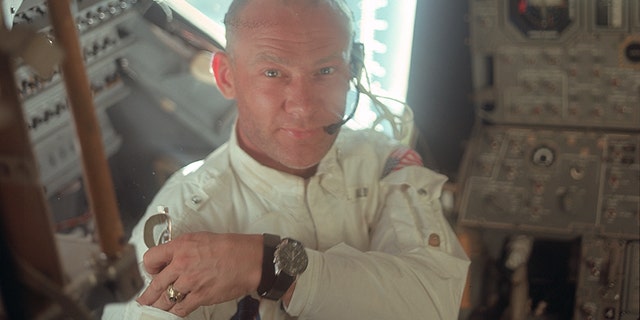 Apollo 11 astronaut Edwin Eugene “Buzz” Aldrin Jr., who reimagined the potential of human achievement before a worldwide audience when he walked on the moon, was born on this day in history, Jan. 20, 1930.

“The sky is not the limit … There are footprints on the Moon!” the explorer enthused in his 2016 book, “No Dream Is Too High: Life Lessons From a Man Who Walked on the Moon.”

The Apollo 11 mission was the first in human history to land men on earth’s satellite, fulfilling a dream as old as humanity itself.

ON THIS DAY IN HISTORY, JAN. 19, 2000, HEDY LAMARR DIES – ‘MOST BEAUTIFUL WOMAN’ IN HOLLYWOOD, WWII INVENTOR

He was followed 19 minutes later by Aldrin.

The pioneer of human exploration was born to reach for the heavens.

This July 20, 1969, photo made available by NASA shows pilot Edwin “Buzz” Aldrin in the Apollo 11 Lunar Module. For the 50th anniversary of the landing, Omega issued a limited edition Speedmaster watch, a tribute to the one that Aldrin wore to the moon. (Neil Armstrong/NASA via AP)

His father, Edwin Eugene Aldrin, was an early champion of aviation who served in both World War I and World War II; his mom was named Marion Moon.

He was a 1951 gradate of the United States Military Academy at West Point.

“The sky is not the limit … There are footprints on the Moon!” – Buzz Aldrin

He served a year-long deployment in the Korean War as an officer in the U.S. Air Force, which had become a separate branch of the military while Aldrin was at West Point.

He flew 66 combat missions, shooting down two enemy aircraft, and earning a Distinguished Flying Cross, among other honors. 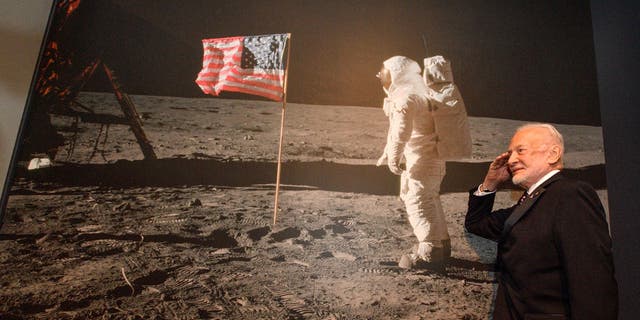 Buzz Aldrin salutes as he stands next to a picture of himself on the Moon during a tour of the Apollo 11 exhibit at the Richard Nixon Presidential Library and Museum in Yorba Linda, California, on Tuesday, July 23, 2019. (Jeff Gritchen, Orange County Register/SCNG)

Aldrin earned a doctorate in astronautics from the Massachusetts Institute of Technology in January 1963 and joined the NASA space program in October that year.

“A distinguished airman, scientist, astronaut and patriot, Dr. Buzz Aldrin has left an indelible mark, not only on the history of his country, but also on that of the world,” writes the West Point Association of Graduates.

The “scientific triumph” of the moon landing, the association notes, was “one of the most memorable events of the 20th century and … represented the epitome of the nation’s scientific capabilities and established its preeminence in the exploration of space.”

Aldrin is the only one of the three astronauts on the Apollo 11 mission still alive today.

FIRST MEN ON THE MOON, A UNIQUE AMERICAN ACHIEVEMENT, STILL AMAZES US TODAY

All three history makers were military pilots; each was born in 1930.

Aldrin, among many other legacies, might have been America’s first victim of cancel culture.

He gave himself communion upon landing on the moon, after gaining permission from his local congregation, Webster Presbyterian Church. 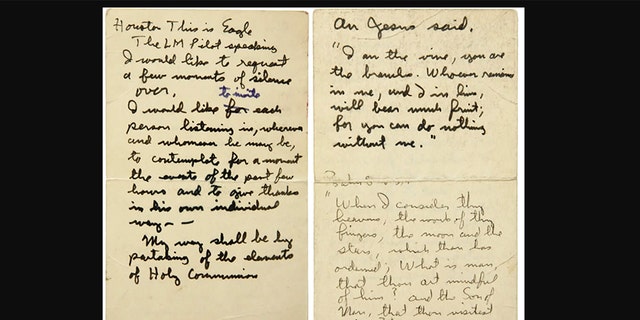 Buzz Aldrin’s handwritten notes and scriptures flown to the surface of the moon, from a 3-by-5 inch buff-colored, lightweight card. Aldrin read John 15:5 while taking communion upon landing on the moon and read Psalm 8: 3,4 on his way back to earth. (Courtesy of Heritage Auctions)

He asked for a moment of silence over the communications system with mission command on Earth, hoping the ceremony would be broadcast around the world.

Atheist activist Madalyn Murray O’Hair had recently sued the organization after astronauts on the Apollo 8 mission read from the Book of Genesis as they became the first men to orbit the moon.

The lawsuit was eventually dropped, but the space program was nervous about including any more faith declarations.

Regardless of that moment, Aldrin’s achievement still captures the imagination.

The white NASA space jacket he wore in flight during the Apollo 11 mission netted $2.7 million last year in a Sotheby’s auction. 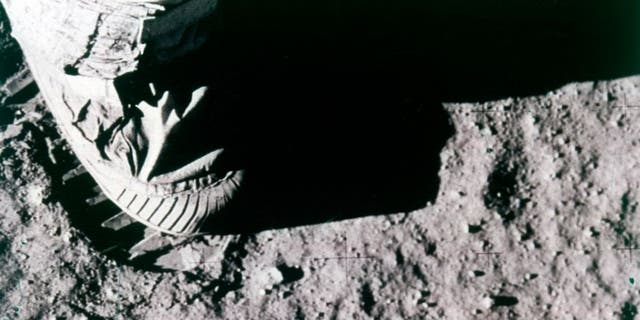 Buzz Aldrin’s footprint on the moon, Apollo 11 mission, July 1969. Boot-print of U.S. astronaut Buzz Aldrin in the lunar soil. The Apollo 11 lunar module, code named Eagle, with Neil Armstrong and Buzz Aldrin on board, landed in the Sea of Tranquility on July 20, 1969. Apollo 11 was the fifth manned Apollo mission and was the first to land on the moon. Artist Buzz Aldrin. (Heritage Space/Heritage Images/Getty Images)

It was the biggest price tag ever for an artifact of space travel and the most expensive of any jacket sold at auction in history.

“Today’s result is a testament to the legendary career of Buzz Aldrin and his lifelong dedication to the exploration and understanding of the universe,” said Cassandra Hatton, Sotheby’s global head of science and popular culture, last year.

The “record-breaking outcome proves the ongoing and everlasting significance of the Apollo 11 mission, some 53 years since man first walked on the moon.”

Aldrin quoted Psalm 8: 3-4 as the mission left the moon and returned to Earth: “When I consider thy heavens, the work of thy fingers, the moon and the stars, which thou has ordained; What is man that thou art mindful of him? And the Son of Man, that thou visitest Him?”