Georgia Tech, led by legendary coach and trophy namesake John Heisman, humiliated Cumberland College 222-0 in the most lopsided college football game on record on this day in history, Oct. 7, 1916.

The football farce pitted national pigskin powerhouse Georgia Tech against a school from Lebanon, Tennessee, that reportedly pulled student volunteers off campus and out of frat houses to fulfill a contractual commitment.

“The rout can be traced back to a 22-0 loss the Georgia Tech baseball team, also coached by Heisman, suffered in the spring of 1915. Heisman suspected that Cumberland had stacked its team with professional ringers,” the NCAA reported in its 100th anniversary retrospective of the game in 2016.

ON THIS DAY IN HISTORY, OCT. 6, 1927, ‘THE JAZZ SINGER’ RELEASED, FIRST FILM WITH SYNCHRONIZED SOUND

Heisman enjoyed his opportunity for revenge on the gridiron.

Cumberland College had committed to playing Tech in 1916. But the school, today known as Cumberland University, suspended its football program before the start of the season. 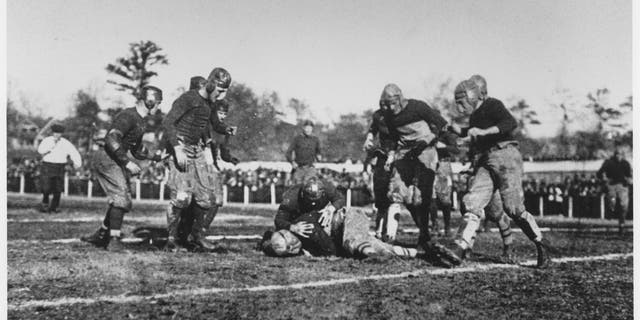 This is one of the few known photos from the most lopsided game in college football history. Georgia Tech beat Cumberland College, 222-0, Oct. 7 1916.  (Georgia Tech Athletics)

The almighty dollar proved the deciding factor in making the mismatch happen.

“Cumberland reportedly would owe Tech $3,000 if the game was not played. Heisman insisted Cumberland come to Atlanta and play the game,” the NCAA notes.

So hungry was Heisman for payback that he reportedly personally chipped in $500 to help Cumberland cover travel expenses, the equivalent of about $13,500 today.

“Thirteen noble fraternity brothers volunteered to suit up and get clobbered, in effect, saving Cumberland from bankruptcy,” late sportscaster Frank Deford wrote in a 2016 100th-anniversary story for NPR.

The Yellow Jackets — Georgia Tech’s nickname, another Heisman contribution to the program — raced out to a 63-0 first-quarter lead.

They were up 126-0 at halftime before the swarm subsided. They scored only 54 and 42 points, respectively, in the final two quarters, which Heisman agreed to shorten from 15 to 12 minutes. 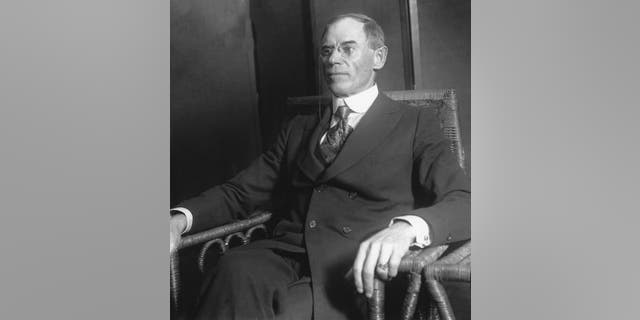 John W. Heisman is shown in an image circa 1919.  (Bettmann Archive/Getty Images)

The game included “one of the weirdest plays in college football history,” the NCAA reports.

“In the second quarter, after Georgia Tech scored to make it 105-0, Jim Preas kicked off to [Cumberland,] who fumbled the ball. Then Preas — the kicker — recovered the kick and scored before kicking the extra point as well to push Tech’s lead to 112-0.”

Neither team gained a first down. 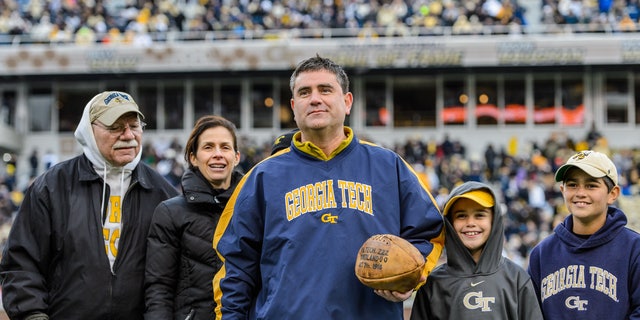 Georgia Tech beat Cumberland College 222-0 Oct. 7, 1916. Georgia Tech alumnus Ryan Schneider and his family are shown here. Schneider purchased a ball used in the game at auction in 2014 and donated it to the university. The ball, showing the score, is on display in the Edge Center, Georgia Tech athletics’ headquarters. (Georgia Tech Athletics/Danny Karnik)

The 222-0 debacle actually inspired a long-term benefit for the game of college football, some observers, including Cumberland alumnus and longtime school trustee Sam Hatcher, argue.

He wrote the book, “Heisman’s First Trophy: The Game that Launched Football in the South,” in 2016.

Hatcher argued that the game generated so much attention nationally that it helped turn southern schools into the college football powerhouses they are today.

Georgia Tech was declared the national champion the following season, the first southern team to achieve that honor, while Heisman has been immortalized with the game’s highest individual honor. 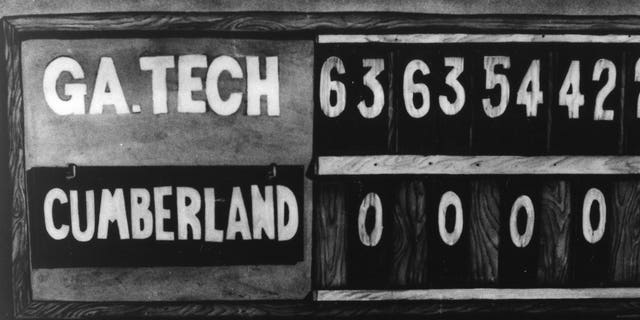 Georgia Teach scored 63 points in each of the first two quarters in its shocking 222-0 win over Cumberland College Oct. 7, 1916. The second half’s quarters were reduced from 15 minutes to 12 minutes.  (Georgia Tech Athletics)

The top player in college football each year is granted the Heisman Trophy, an award now of almost mythic status in American sports.

And Southern schools dominate college football today, specifically those from the Southeastern Conference.