The fatherly yet determined red, white and blue personification of the United States became a symbol of the nation on this day in history, Sept. 7, 1813, according to History.com and other sources.

ON THIS DAY IN HISTORY, SEPT. 6, 1757, MARQUIS DE LAFAYETTE IS BORN, HERO OF TWO REVOLUTIONS

Leroy Lincoln Rounseville has some knowledge of this. He legally changed his name to Uncle Sam in 1991 while helping to raise funds for Gulf War veterans.

He’s become a repository of Uncle Sam history and lore and is a familiar figure in full Uncle Sam red, white and blue regalia at ballgames and patriotic events in Boston and around the country.

Uncle Sam Rounseville waves his flag at the rehearsal for Boston’s 4th of July concert at the Hatch Shell on Thursday, July 3, 2008. Leroy Lincoln Rounseville legally changed his name to Uncle Sam in 1991.  (Stuart Cahill/MediaNews Group/Boston Herald via Getty Images)

“Though the origins of the name Uncle Sam are subject to some dispute, most historians believe that the name came from a New York merchant named Sam Wilson, known by his friends as ‘Uncle Sam,'” concurs National Geographic.

TOM COTTON: OUR ADVERSARIES SEE UNCLE SAM WITH A ‘KICK ME’ SIGN ON HIS BACK

The New York State Museum offers a detailed account of the origin story. 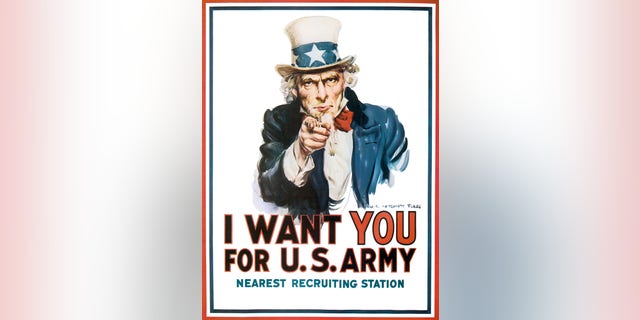 Wilson “supplied the Army depot at Watervliet Arsenal New York with rations. Wilson’s wooden barrels were stamped U.S., in broad capital letters, indicating that the food was the property of the United States and intended for American soldiers serving on the northern border with Canada,” according to the museum’s website.

“Teamsters, carrying the rations to the troops along rutted tracks, identified the supplies as a gift from their Uncle Sam … It seemed everything came special delivery from Uncle Sam.” 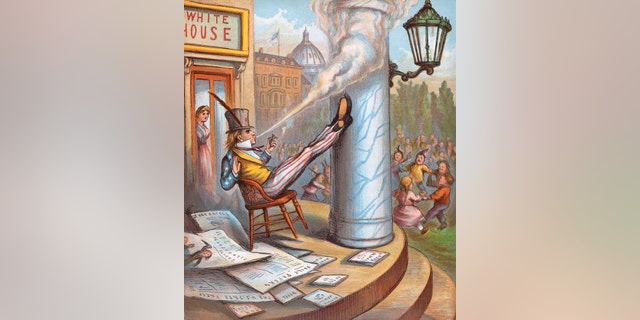 Illustration (by Thomas Nast) of Uncle Sam seated on the porch of the White House as he smokes a cigar while children play on the lawn, 1902. Spread out on the ground around him are various newspapers, books and magazines — while visible in the White House doorway is Columbia, an earlier U.S. personification. (Getty Images)

The abbreviation “U.S.” was a “novelty” in the early days of the nation, reports the Albany Institute, so “receivers of the casks did not know that U.S. meant United States.”

ON THIS DAY IN HISTORY, AUGUST 19, 1812, OLD IRONSIDES LEGEND BORN IN SMASHING VICTORY OVER ROYAL NAVY

Uncle Sam gained widespread visibility after the Civil War when he was drawn by cartoonist Thomas Nast for major-media outlets. 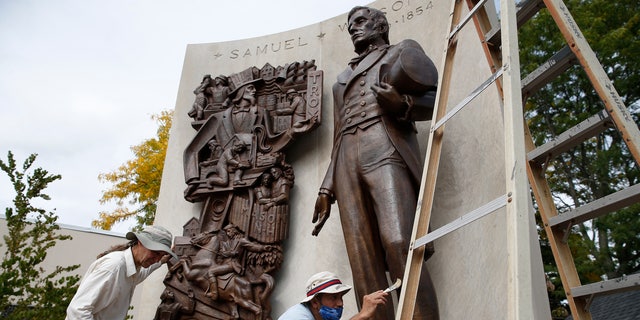 Martin Sylvester, left, buffs a coat of wax he applied to the Uncle Sam Memorial statue in Arlington, Mass., as Mario Marroquin applies wax to the lower half of Uncle Sam’s legs on Sept. 28, 2020. The statue commemorates Samuel Wilson, the original Uncle Sam, near his birthplace in Arlington.  (Jessica Rinaldi/The Boston Globe via Getty Images)

But the image of America took on his more recognizable likeness in a series of U.S. Army recruiting posters by artist James Montgomery Flagg during World War I.

Flagg’s Uncle Sam was renewed in World War II recruiting posters and remains a familiar image of the United States around the world today.

Wilson, the inspiration for Uncle Sam, was born in Arlington, Mass., in 1766. He moved to Mason, N.H., as a boy and, at age 14, joined the Continental Army, according to a 1936 biography in the Troy Times-Record.

He moved to upstate New York around 1788.

Wilson is honored today with memorials in both Arlington, Mass., and Troy, N.Y.

“Wilson died at age 87 in 1854, and was buried next to his wife Betsey Mann in the Oakwood Cemetery in Troy, New York, the town that calls itself ‘The Home of Uncle Sam,'” writes History.com.