One Saturday in Dnipro, When a Russian Missile Shattered Lives 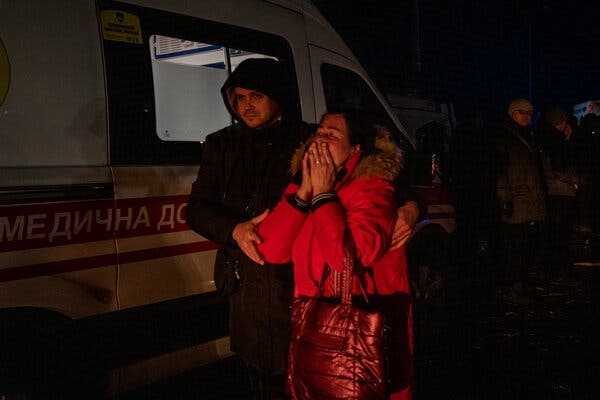 DNIPRO, Ukraine — A Russian missile as long as a city bus was nearing the end of a roughly 300-mile flight, its 2,000-pound warhead armed to detonate on impact.

As it was descending through a gray sky last Saturday, traveling at supersonic speed, Rostyslav Yaroshenko, 12, was watching TikTok videos in his kitchen on the third floor at 118 Victory Embankment, a sprawling apartment complex in the central Ukrainian city of Dnipro. Six floors up, Yevgeniy Botvynov had just curled up with his wife, Olha, under a blanket, trying to keep warm during yet another power outage.

On the other side of the building, two couples had gathered in their kitchens on the fourth floor, one of them warming a late lunch, the other doting on their 1-year-old son.

It was what passes for an ordinary Saturday for ordinary Ukrainian people these days, in a place far from the front lines of the war with Russia, but never fully at peace. All day, air-raid warnings were sounding, forcing people to make calculations that have become habitual: Go to a shelter or stay home? Take the elevator or the stairs?

Most of the time, life appears to be normal. And then, suddenly, it does not.

Around 3:40 p.m. on the 325th day of Russia’s full-fledged war in Ukraine, an ordinary Saturday turned extraordinary when the Russian Kh-22 missile slammed into 118 Victory Embankment.

More than 30 apartments were instantly incinerated, with nothing left but a column of swirling ash. Along the singed periphery, some units were sliced apart with almost surgical precision, exposing the contents of people’s living rooms, bathrooms and kitchens to the open air. A bowl of fruit sat unscathed on the table in one kitchen that had been opened up like a dollhouse; in another unit, a painting of a dog hung crookedly on a kitchen wall — though the kitchen was no longer there.

On Thursday, the authorities raised the death toll to 46, including six children; 80 were wounded. It was one of the deadliest single attacks against civilians since the early weeks of the war.

The apartment building, an enormous Soviet-era edifice, forms a large inverted J that curls around an internal courtyard, with the largest section facing the Dnipro River. An estimated 1,700 people called it home.

The missile hit just above the joint where the building began to curve away from the embankment. For those at the center of the impact, death came instantly: The explosion simply vaporized some residents, according to the authorities.

Olha Usova, a 36-year-old dentist, happened to be walking by on her way to a newly opened gym when the missile struck. A single piece of shrapnel pierced her heart, her husband, Eduard, said, killing her instantly. He said he felt that with normal attacks, you had a decent chance of surviving just by remaining indoors. This one was different.

“In this case,” he said, “such a rocket left no chance for survival.”

Many did manage to survive, but that often depended on where in their homes they were at the moment of impact. Many found themselves trapped, the missile’s force having sheared off the stairwells on two sides of the building.

Mr. Botvynov, who had been cuddling with his wife under a blanket, first had to pull himself free from the twisted remains of a balcony that had crashed through his living room. Then he grabbed his heavily bleeding wife and rushed to the front door. When he opened it, there was nothing but a nine-story drop into the smoking rubble below.

Across the void, he saw a woman curled in fetal position, partly buried in debris from her destroyed apartment.

It is impossible to say whether the apartment complex in Dnipro was hit intentionally. The Kh-22 is a 1960s-era anti-ship missile launched by Russian bombers that is designed to attack warships at sea, and it may have more limited abilities to accurately attack targets on land.

A power station directly across the river from the complex could have been an intended target, part of Russia’s strategy of starving Ukrainians of electricity, though it was roughly two miles away. The Kremlin has denied that a Russian missile was involved, blaming an errant Ukrainian air-defense missile. Military experts have dismissed this claim as yet another Russian fabrication, pointing to the colossal damage.

The day of the attack was a holiday in Ukraine, when many celebrate what is known as Old New Year, based on the Orthodox Church’s pre-modern calendar. That made Olha Afanasieva, 49, anxious. After 11 months of war, Ukrainians believe that the Kremlin takes a twisted pleasure in attacking on holidays.

“For me, it was such an anxious day,” she said, adding that she had insisted that her husband not go fishing as planned. “I felt like something was about to happen.”

Ms. Afanasieva’s husband, Oleh Valovyi, took things in stride, though. Rockets had rained down on a number of cities that day, and the entire country was under an alert for hours.

“There are not that many bomb shelters,” Mr. Valovyi said, “and you get tired of running there because the air-raid alarms sound practically every day, several times a day.”

The couple were seated at their kitchen table when the missile hit, she with her left side facing a window, he directly in front of it. The blast blew out the window, and glass and debris shredded half of Ms. Afanasieva’s face. But her husband bore the brunt of it.

“He was just all black and bloody,” she said. “His face started to turn black under the eyes, and all that, my God.”

Finding their apartment door jammed, she went to the window screaming and waving a towel and a bathrobe, trying to catch the attention of firefighters who had started assembling below.

At the same time, Mr. Botvynov, facing the nine-story drop with no stairs, was frantically signaling with his cellphone’s flashlight, worried that his wife, who was bleeding profusely from her head, would lose consciousness.

On the fourth floor, Kateryna Zelenska, who is 27 and deaf, was trapped under the rubble, unable to signal emergency workers. Her husband, Oleksii Zelensky, 28, and their 1-year-old son, Mykyta, were somewhere nearby, but she did not know their conditions. Slabs of concrete had collapsed onto their apartment from the floors above. Somehow, Ms. Zelenska managed to make a brief call to her mother, apparently to say goodbye.

“She said, ‘Mom, I love you, I love you,’ and that’s it, it broke off,” her mother, Oksana Kulak, said through tears.

Over the next 24 hours, rescuers using cranes and ladders saved dozens of people trapped on upper floors. It took about three hours to reach Mr. Botvynov and his wife. Ms. Afanasieva got out first, but said she regretted leaving her husband to manage by himself. He passed out on the balcony as firefighters were trying to guide him onto a platform atop a ladder.

Later at the hospital, he was in surprisingly good spirits for someone whose body had been pierced by glass head to toe. But he expressed confusion over Russia’s choice of target.

“I work at a company that deals with agriculture, selling parts for the tractors, a completely peaceful profession,” he said. “Surely, my death would not have any military significance.”

How rescuers noticed Ms. Zelenska, the deaf woman, is unclear, but by Sunday morning, firefighters attached to safety lines and standing on a platform suspended by a crane were working furiously at the spot where her apartment had been. They cut away debris for hours. Finally, she appeared covered in dust, alive but visibly distressed.

For the next 48 hours, firefighters continued to hack at the concrete slabs that had pancaked onto Ms. Zelenska’s apartment, searching for her husband and son.

By Tuesday morning, the couple’s families had gathered at the site in what was a mostly silent vigil, until, as the sun came up, Ms. Zelenska’s father, Mykola Kulak, vented his anger.

“The Russians, let them all perish, these devils,” he screamed, holding up his phone to show a video of his grandson. “This child is still lying under the rubble! I am cursing them, and I wish that every Russian family has two or three, just like this, lying there like our child.”

Shortly afterward, rescuers brought down the bodies — first Mykyta, then Oleksii — using a special crane. They were placed on the ground in black body bags as their family waited to carry out the wrenching task of identifying them.

Oleksii’s parents knelt in front of their son’s body, unzipped the bag and for several interminable minutes caressed him, sobbing.

Ms. Zelenska’s parents had rushed off earlier to join their daughter, who had been hospitalized since being rescued two days earlier. She had found out on the internet that the bodies of her husband and son had been recovered, the first confirmation she had that they were dead.

On Tuesday afternoon, the authorities declared an end to the search, but by evening, firefighters had returned to 118 Victory Embankment for an unexpected rescue mission. One that came at the behest of Rostyslav, the boy who had been watching TikTok videos before the missile hit.

He had managed to escape his mangled apartment by climbing out a window and scrambling down the building’s facade with the help of bystanders. But in the confusion, he had been unable to locate his white cat, Belyash.

“I was more frightened for my cat,” he said.

And so firefighters once again climbed into the building as Rostyslav, his mother, Nadiia, and a small crowd of onlookers gathered in the darkness below. After about 20 minutes, a firefighter emerged from the kitchen window, a red and white cat carrier in hand. Inside, was a dirty and frightened Belyash.

“We’re going home,” said Rostyslav, peering into the carrier when at last he and his pet were reunited. “Not this home, of course, but everything will be OK.”