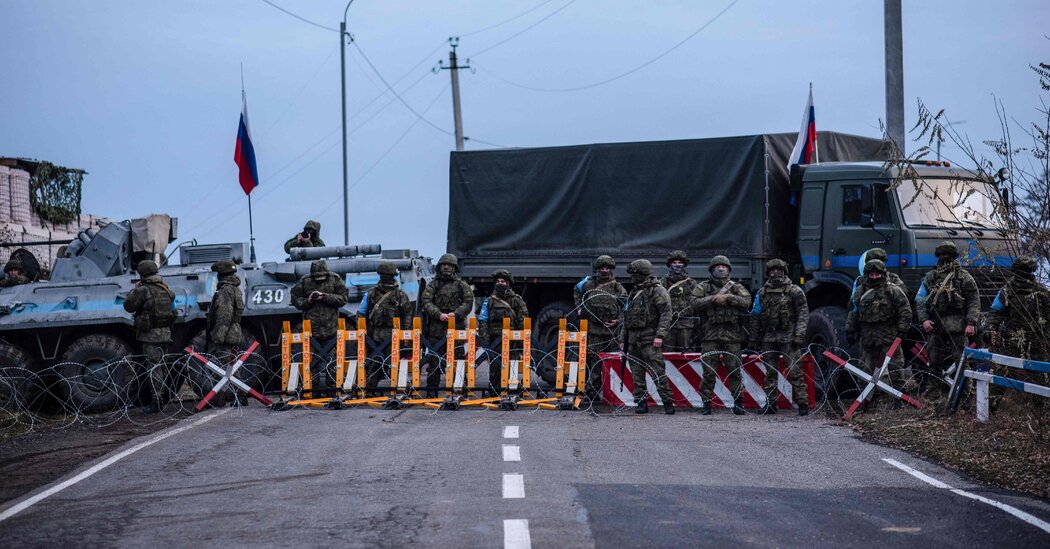 Russia helped end a 2020 war and its troops policed the cease-fire. But with a new crisis in the Caucasus heating up, Moscow, distracted and weakened by Ukraine, has not intervened.

In late 2020, when President Vladimir V. Putin of Russia brokered the end of a war in the Caucasus between Azerbaijan and Armenia, and placed 2,000 Russian peacekeeping troops between the two sides, it looked like a strategic masterstroke.

The deal gave Russia a military presence in one post-Soviet country, Azerbaijan, while deepening the reliance of another, Armenia, on Russia as a guarantor of its security. It positioned Mr. Putin as a peacemaker and seemed to affirm his claim to Russia’s rightful influence, as the only power capable of keeping stability throughout the former Soviet sphere.

Barely two years later, the conflict over the Nagorno-Karabakh region of Azerbaijan is heating up again, and Russia, distracted and weakened by the war in Ukraine, has not stepped in. Defying the Russian presence, Azerbaijanis are testing whether Moscow is still able and determined to impose its will on other, smaller neighbors amid its struggles in Ukraine.

Since Dec. 12, the mountain road linking Nagorno-Karabakh to Armenia has been blocked amid protests by Azerbaijani activists claiming to be opposing illegal mining operations in the area. Azerbaijan’s government has endorsed the protests; Armenians say Azerbaijan engineered them and criticize Russian peacekeepers for not keeping the road open.

“It can be seen that Russia’s resources in the region are becoming limited,” said Farhad Mammadov, a pro-government analyst in Baku, the capital of Azerbaijan. “Russia is becoming weaker.”

The roadblocks are a new escalation in the bloody, decades-old dispute over an enclave home to tens of thousands of ethnic Armenians within Azerbaijan’s internationally recognized borders.

In Nagorno-Karabakh, supermarkets are stocked with little but alcohol and candy, and supplies of diapers and basic medicine are so low that residents post on Facebook in search of them, according to Tatev Azizyan, a local journalist. Starting Friday, people will have to present ration cards to buy rice, pasta, buckwheat or sugar.

Russia’s invasion of Ukraine has reshaped relations around the globe, perhaps nowhere more clearly than on the boundary between Europe and Asia, strengthening the hands of Turkey and Iran, now important sources of trade and weapons for Moscow, while undermining Russian influence in the Caucasus.

Armenia is part of the Russian-led military alliance of six post-Soviet countries, the Collective Security Treaty Organization, and hosts a Russian military base. But so far, the Kremlin, with its hands full in Ukraine, has not taken action to aid its ally.

“The whole concentration of attention on Ukraine makes the situation more fragile and gives a new opportunity to Azerbaijan to use force and be more aggressive,” Vahan Kostanyan, an adviser to Armenia’s foreign minister, said in a recent interview.

Armenia won a war against Azerbaijan over Nagorno-Karabakh in the early 1990s, giving it control of some 13 percent of Azerbaijan’s total land area, including Nagorno-Karabakh. Azerbaijan won much of it back when it launched an offensive in 2020, taking advantage of its natural gas profits to buy superior weaponry from Turkey and Israel.

The recent war ended after 44 days with the cease-fire negotiated by Mr. Putin, and Russian troops were deployed to protect the Armenians remaining in and around Stepanakert, the region’s biggest city, and the road connecting it to Armenia.

Now, some Armenians believe, Azerbaijan is intent on starving them out with the roadblocks. “This is so that we leave our homeland,” Ms. Azizyan, the journalist in Armenian-populated Nagorno-Karabakh, said in a phone interview. “That is their goal.”

President Ilham Aliyev of Azerbaijan said last week that “whoever does not want to become our citizen, the road is not closed; it is open. They can leave whenever they want.”

Russia’s leverage is waning in both countries. In Azerbaijan, the Ukraine invasion turned public opinion further against Russia and its peacekeeping contingent, said Zaur Shiriyev, a Crisis Group analyst in Baku. In Armenia, Russia’s military support looks less advantageous, with Russia no longer a prolific exporter of weaponry — it needs it in Ukraine — and with Mr. Putin keen to preserve close ties with Turkey, Azerbaijan’s main ally.

Tigran Grigoryan, an Armenian political analyst, said the war in Ukraine had “created an environment in which the Russian deterrent isn’t working in the region.”

There is little clarity on how the current crisis can be resolved. Azerbaijan insists it has not imposed a blockade on Nagorno-Karabakh, and that humanitarian and medical traffic is being let through. But on the ground, the situation appears increasingly dire for Armenians in Nagorno-Karabakh who are stranded with limited food and other essentials, and cut off from family members who were in Armenia when the crisis began.

Ms. Azizyan said she recently braved a six-hour line at an A.T.M., and that things as simple as oranges, cheese or fever-reducing drugs have become prized possessions. Kindergartens are closed, she said, because of a lack of food.

After Russian peacekeeping troops were filmed recently handing out humanitarian aid outside a local maternity clinic, residents split into two camps on social media, she said: some thanked the Russians, while others asked why they weren’t doing more.

“No one understands,” Ms. Azizyan said, why Russia is not able to reopen the road. “People have started to get angry and to express their indignation toward the peacekeepers.”

While Azerbaijan won the 2020 war, it still has not achieved all its aims, including a transportation corridor to the Azerbaijani exclave of Nakhchivan, a separate slice of Azerbaijani territory on Armenia’s southwestern border, that would give the country a direct link to Turkey. It is also seeking to exert greater control over the road that is now being blocked, known as the Lachin Corridor, claiming that Armenia is using it to illegally transport land mines into the territory.

Russia has been trying to tread a middle path amid the escalation. While Armenia is a military ally, Mr. Aliyev has developed a close relationship with Mr. Putin, and both countries are important economic partners for Russia amid Western sanctions.

“We call on the Azerbaijani and Armenian sides to demonstrate good will and to seek compromises together,” Maria V. Zakharova, the Russian Foreign Ministry’s spokeswoman, said last week.

The Kremlin continues to keep a hand in the negotiations between Azerbaijan and Armenia, and Mr. Putin spoke with Mr. Aliyev and with Prime Minister Nikol Pashinyan of Armenia in December in St. Petersburg. In televised remarks at his meeting with Mr. Putin, Mr. Pashinyan noted with apparent frustration that “it turns out that the Lachin Corridor is not under the control of Russian peacekeepers.”

Last week, Mr. Pashinyan went further in pushing back against Moscow, canceling planned military drills in Armenia this year by the Russia-led alliance.

“Russia’s military presence in Armenia not only fails to guarantee its security, but it raises security threats for Armenia,” Mr. Pashinyan said, according to The Associated Press.

But analysts say that there is little chance that Armenia will be able to disentangle itself from its reliance on Russia anytime soon — the latest in a series of lessons for post-Soviet countries about the difficulty of moving out of Moscow’s security shadow, especially when instability threatens. In Belarus in 2020 and Kazakhstan last year, leaders of former Soviet countries turned to Mr. Putin for help in the face of popular uprisings, reinforcing his sway over both nations.

“Armenia has a massive strategic problem,” said Thomas de Waal, a senior fellow at Carnegie Europe who has studied the conflict for decades. Mr. Pashinyan “would like a much more balanced foreign policy, and yet he’s stuck with Russia as his main military-political ally.”

Still, with Moscow distracted, the European Union and the United States have heightened their own efforts to broker a lasting peace and to build their influence in the Caucasus. Mr. Pashinyan and Mr. Aliyev met last August and last October in meetings arranged by the European Union, and the two countries’ foreign ministers met in Washington in November.

Analysts described the dual negotiating tracks as unusual — one led by Russia, the other by the E.U., at a time when Moscow and the West are locked in their most intense conflict in decades. But the E.U.’s special representative for the southern Caucasus, Toivo Klaar, said in an interview that he has been in contact with his Russian counterpart, the diplomat Igor Khovayev, and held two in-person meetings with him last fall.

“In the current circumstances there’s potentially more space for Armenia and Azerbaijan to actually overcome their conflict,” Mr. Klaar said. “The question is whether they’re able to seize that opportunity.”