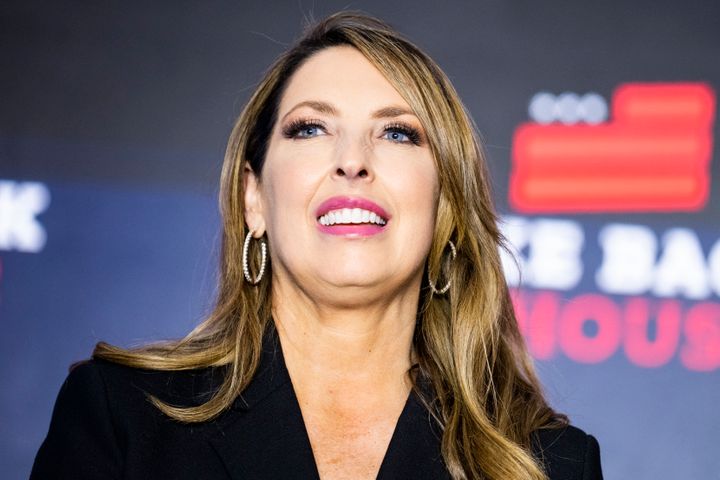 WASHINGTON ― Facing a contested race for chairman for the first time in over a decade, the Republican National Committee is hosting a members-only candidate forum at its winter meeting this month, where incumbent Ronna McDaniel will have to face challenger Harmeet Dhillon.

The closed-door confrontation is not technically a debate, like Dhillon has repeatedly called for, but rather a forum for the candidates to present their pitch and, if they wish, take questions from the members in attendance.

“The candidate can use the time to give a speech, take questions, or both. The use of the allotted time is in the sole discretion of each candidate,” read a memo sent to the RNC’s 168 members Tuesday. “A podium and microphone will be provided, but the use of audiovisual or electronic equipment is prohibited.”

“Harmeet Dhillon has called multiple times for a public debate in this RNC chair race,” a Dhillon spokesperson said. “It is unfortunate that chairwoman McDaniel, whose job it is to publicly advance the conservative agenda against the left, is afraid to even debate another RNC member and it sends a very bad signal to RNC donors and grassroots leaders that the current chair is too weak or afraid to stand behind her own record.”

McDaniel did not respond to HuffPost queries placed with her staff.

The forum at the winter meeting will be spread over two days, and feature candidates running for chair, co-chair, treasurer and secretary, according to the memo.

Dhillon, an RNC member from California, has been aggressively running for the post before local and state party committees as well as conservative groups. At these events, she has urged those in the audience to contact their state party’s three RNC members to lobby them on her behalf.

“Ask for a poll of your state party leadership on who should be the next leader of the RNC,” she told attendees at Turning Point USA’s conference in Phoenix last month.

McDaniel has said she was willing to debate Dhillon, but only before the 168 members of the committee.

Dhillon’s main argument is that McDaniel has presided over poor Republican performances ever since she was hand-picked by Donald Trump to run the RNC after he unexpectedly won the White House in 2016.

In 2018, Republicans lost control of the House. They lost the White House and the Senate two years later, and then barely took back the House in the recent midterms while actually losing a seat in the Senate.

Neither Dhillon nor McDaniel, though, has of yet publicly put the blame on the person many Republicans privately acknowledge was the reason for those losses: the coup-attempting former president himself, who, while popular with the GOP base, has long alienated key swing voters.

Dhillon, in fact, has Trump as a law client and continues to praise him, telling audiences that she voted for him twice.

The RNC chairmanship carries a two-year term, so the chair elected at the winter meeting later this month in Dana Point, California, would be in charge of the national party heading into the 2024 presidential race.

RNC Challenger Attacking High-Dollar Consultants Despite Being One Herself

Inside The Ugly Fight To Become The Next Republican Chair