Russell Westbrook comes off bench as Lakers drop to 0-5

The Russell Westbrook era in Los Angeles has taken a new turn.

On Friday night, Westbrook came off the bench against the Minnesota Timberwolves as the Lakers fell to 0-5 on the season, losing 111-102.

Russell Westbrook (0) of the Los Angeles Lakers celebrates a basket against the Minnesota Timberwolves in the second quarter of a game at Target Center Oct. 28, 2022, in Minneapolis.  (David Berding/Getty Images)

Westbrook, who missed LA’s game against the Denver Nuggets Wednesday, scored 18 points on 6-for-17 shooting in 33 minutes off the bench.

LEBRON JAMES DROPS TO 0-4 FOR FIRST TIME SINCE ROOKIE SEASON, LAKERS ONE OF THREE WINLESS TEAMS

Westbrook’s bench role will continue for the “foreseeable future,” according to ESPN.

The Lakers once again struggled from the floor, shooting nine of 29 from the 3-point line.

LA entered Friday night’s game with the worst shooting and 3-point percentage in the NBA. They are a combined 42 of 177 from beyond the 3-point line through five games. 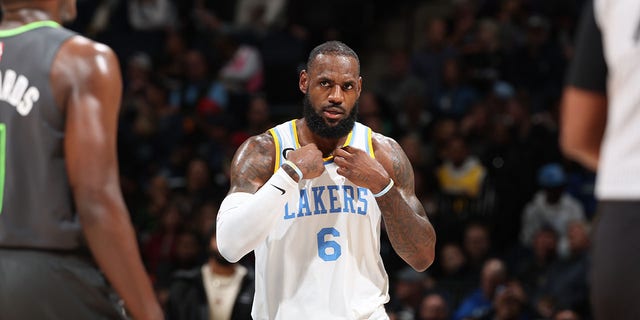 LeBron James of the Los Angeles Lakers during a game against the Minnesota Timberwolves Oct. 28, 2022, at Target Center in Minneapolis.  (David Sherman/NBAE via Getty Images)

“I think our offense is harming us right now,” LeBron James said. “Defensively, once again, we had a great game plan. We went out and competed, gave ourself a chance. Couple possessions here, couple possessions there didn’t go our way, but just keep hammering on.”

LA was without Anthony Davis, who sat out the game with lower back tightness.

On Wednesday night, the Lakers dropped to 0-4 after losing to the Denver Nuggets, marking the first time since James’ rookie season that he has dropped the first four games of an NBA season.

James, who had eight turnovers against Denver, vowed to be more aggressive after dropping to 0-4. 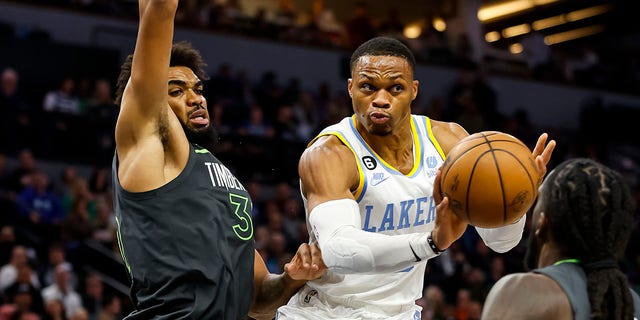 Russell Westbrook of the Los Angeles Lakers, center, passes the ball while Karl-Anthony Towns of the Minnesota Timberwolves, left, defends in the third quarter of a game at Target Center Oct. 28, 2022, in Minneapolis. The Timberwolves defeated the Lakers 111-102.  (David Berding/Getty Images)