The episode opened with a musical performance by cast members Bowen Yang, Cecily Strong and Kenan Thompson encouraging viewers to get into the Christmas spirit by ignoring mental health, drinking too much and blocking out the bad stuff, like Elon Musk owning Twitter.

“Elon, why does he own all the stuff? Why does he have to run Tesla and Twitter? Was outer space not enough?” Strong sang.

Martin and Short’s opening monologue began by poking fun at each other, Prince Harry and Meghan Markle, and the World Cup.

“No one is rooting for us, but you’ll tune in to watch anyway,” Short said about their joint gig, relating it to the Thursday premiere of the “Harry & Meghan” docuseries on Netflix.

A seasoned SNL host, Martin counted his 15 prior appearances on the show while joking about Short’s three, comparing working with Short to the World Cup: something he just can’t get into.

The monologue continued on with a bit about each host writing the other’s eulogy and what would be said. With Sarah McLachlan’s “In The Arms of an Angel” playing in the background, the men insulted one another with quippy one-liners before heading into the skits.

Martin said Short’s last words would be “Tesla autopilot engage” while Short joked that Martin would look “motionless, colorless, stiff, yet so life-like.”

Their monologue finished with a brief appearance from actress and singer Selena Gomez, who stepped in when the guest hosts asked who better to be on stage than them. 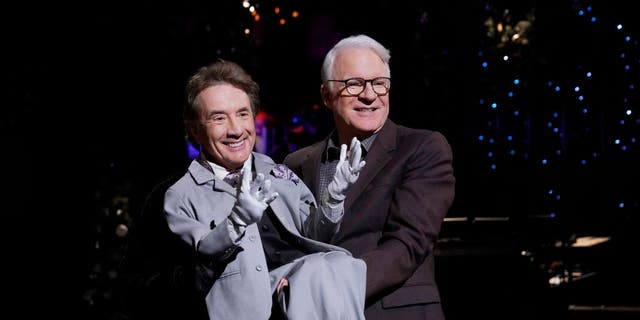 Each segment on the Dec. 10 show related to the holidays from a PBS Kids skit about how snow forms to a gory “preview” for the classic “A Christmas Carol” to “This Way to Meet Santa,” where Martin was Santa and Short played Sprinkles the Elf.

At one point a child (Ego Nwodim) asked Santa for Taylor Swift tickets to which Sprinkles (Short) enthusiastically told her to not ask for those again and to “get a job,” seemingly poking fun at the overwhelming response to tickets for Swift’s upcoming “The Eras Tour.”

In the “Weekend Update,” hosted by Colin Jost and Michael Che, the duo joked about a handful of political hot topics, including Brittney Griner’s release from Russian imprisonment, Kyrsten Sinema’s exit from the Democratic Party and Raphael Warnock’s victory over Herschel Walker in the Georgia Senate runoff.

“I don’t think this is the last you’ll hear from Walker unless he’s your biographical father,” Che said about Walker’s loss.

Che then said the Democratic win in Georgia now means Vice President Kamala Harris can wait for a bigger priority like a “worse bike accident,” referencing President Biden’s fall earlier in the year.

Later on, Che suggested President Trump’s recent request to terminate the Constitution could be completed by asking “Walker to drive it to the clinic.”

A few sports jokes were thrown into the satirical news segment. Jost mentioned Morocco’s stunning win over Portugal in the World Cup, saying it was the “best performance by a team of Africans since the unpaid workers built the stadium.”

Che added that Nike cutting ties with Kyrie Irving over antisemitic posts left the NBA star “so depressed he might jump off the edge of the world,” making fun of Irving’s belief that the world is flat. 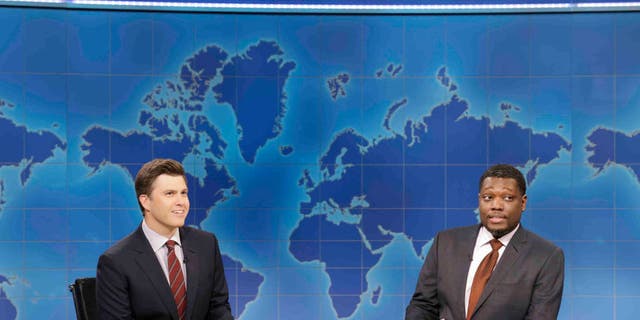 “Weekend Update” ended with a few holiday shopping tips from Mary Anne Louise Fisher (Ego Nwodim) who compared shopping in department store Nordstrom during the holidays to a tour in Iraq.

She also gave tips for holiday shopping, which included being Black.

“If you’re White acting like this, someone will take a video, and you will lose your job,” she said about aggressive shoppers during the holiday season.

“SNL” returns Dec. 17 for the final episode of 2022 with guest host Austin Butler and musical guest Lizzo. The Yeah Yeah Yeahs were originally scheduled, but had to step away after guitarist Nick Zinner contracted pneumonia.