Counties across Mississippi, Arkansas and Louisiana are under a tornado watch Tuesday as a severe supercell storm system continues its trek across the United States.

The National Weather Service confirmed that several tornadoes have touched down in Mississippi through Tuesday evening leaving a path of destruction in their wake.

No injuries were reported as multiple tornado warnings were issued throughout the South, and heavy thunderstorms extended from eastern Texas to Georgia and as far north as Indiana.

Heavy rain and tennis ball-sized hail were also possible as forecasters reported that the storm was expected to continue.

The National Weather Service has extended its “Particularly Dangerous Situation” tornado watch for southeast Arkansas, northeast Louisiana and central Mississippi through 2 am CT. The watch was originally meant to expire at 7 pm CT.

The National Weather Service in Jackson earlier warned that severe storms, thunderstorms and tornadoes could be possible for central Mississippi, including the Jackson metropolitan area.

Dark clouds in Mound, Louisiana before a tornado. (Twitter via Hayden Lester)

The National Weather Service has extended its “Particularly Dangerous Situation” tornado watch for southeast Arkansas, northeast Louisiana and central Mississippi through 2 am CT. The watch was originally meant to expire at 7 pm CT. 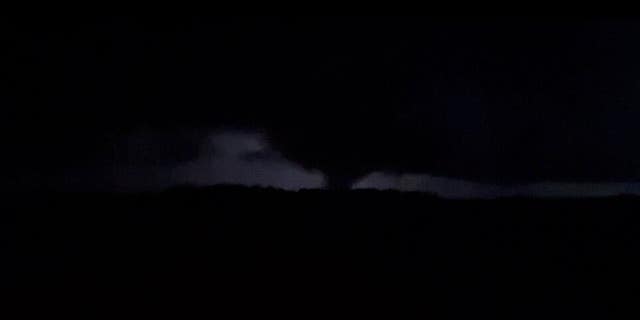 A tornado forms in Mound, Louisiana on Tuesday evening. (Twitter via Hayden Lester)

A little after 7 p.m. central time, the National Weather Service advised residents of Caldwell Parish, Louisiana, to take cover due to a “likely destructive tornado on the ground now.”

Additionally, flood watches were issued for parts of southeast Mississippi and southwest Alabama. The National Weather Service said three to five inches of rain in these areas could lead to flash flooding.

And in parts of the Upper Midwest, heavy snow was slowing down traffic.

Sarah Rumpf is a Fox News Digital Production Assistant. You can reach her on Twitter at @rumpfsarahc