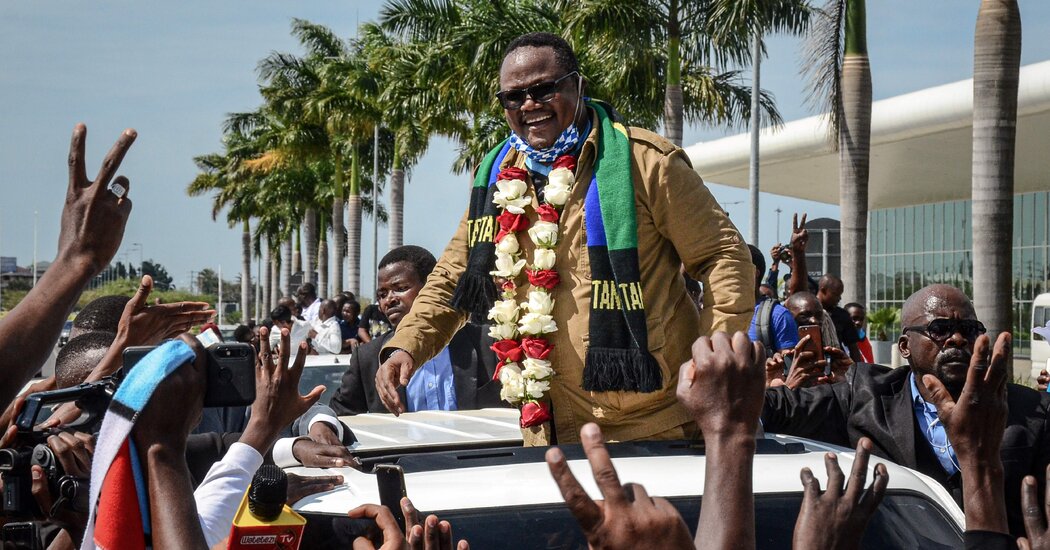 Tundu Lissu, a former presidential candidate, left in 2020 after he was harassed on the campaign trail. He flew home after the country’s leader lifted a ban on political rallies.

Tundu Lissu, Tanzania’s leading opposition figure, returned home on Wednesday after more than two years in exile, one of the strongest indications yet that efforts by the East African nation’s first female president to increase political freedoms and rights protections were being realized.

Mr. Lissu arrived in the port city of Dar es Salaam, according to his party, Chadema. He left in 2020 amid a contested election, which he and independent election observers said was marred by fraud and irregularities. He said he was detained and had received death threats.

Mr. Lissu said he was emboldened to return because of President Samia Suluhu Hassan’s decision this month to lift a yearslong ban on political rallies that had been seen by some as an attempt to weaken the opposition. The move, he said, was a sign of the government’s commitment to political reforms and gave hope of an end to the intimidation and prosecution of opposition figures. Mr. Lissu had also survived an assassination attempt in 2017 and left the country then as well.

“The lifting of the illegal and blanket ban on political assemblies and the release of prisoners informed my decision to go back to Tanzania,” Mr. Lissu said in a phone interview before boarding a flight from Belgium, where he had been living.

He added: “I am happy and hopeful to be going back home.”

Ms. Hassan came to power in March 2021 after the death of her predecessor, John Magufuli. Mr. Magufuli, popularly known as “the Bulldozer,” had played down the seriousness of the coronavirus pandemic and had been accused of muzzling the news media, cracking down on the opposition and enacting laws that maintained the governing party’s grip on power.

Before and during the 2020 election, Mr. Magufuli’s government restricted social media access, detained opposition leaders and made it difficult for Mr. Lissu’s campaign to gain access to polling stations.

But her government has come under sharp criticism for moving slowly on ratifying promised changes and maintaining some of her predecessor’s directives.

In an interview with The New York Times last year, she also dismissed the threats against Mr. Lissu during the election, saying they were “wild exaggerations.”

Activists said that lifting the ban on political rallies almost two years after she came to power was too little, too late.

“What President Samia has managed to do is to make it appear as if backing off from the draconian illegal roadside declaration banning political rallies is because of her good will,” said Maria Sarungi Tsehai, a Tanzanian activist.

“The fact is the situation has been untenable because the pressure is very high from citizens, civil society and religious groups who are pushing for a new constitution,” she said.

Tanzania’s Constitution, which was ratified in 1977, grants vast powers to the president. Attempts to amend it have failed in the past. Mr. Lissu said pushing for a new constitution would be his party’s main priority in the coming weeks and months.

“I am under no illusion of the difficulties, dangers and work ahead, particularly with regards to getting a new democratic constitution,” Mr. Lissu said. “But I have decided that I am not going to be forced to live outside my country anymore.”