The Texas woman accused of stabbing and strangling her 5-year-old daughter, allegedly because she “did not want to deal with her anymore,” has a mental health history that includes schizophrenia, her attorney said Tuesday.

Melissa Towne, 37, cried as she appeared in a Houston court on Tuesday, hours after she was ordered held on $15 million bond in connection with a capital murder charge, The Associated Press reported.

She is accused of leading her daughter, Nichole, into the woods near Spring Creek Park on Sunday in the Houston neighborhood of Tomball. She allegedly ordered her daughter to her knees and slit her throat, police and officials have said.

Towne then went on to cover the girl’s head with a trash bag after she began resisting and strangled Nichole for 30 to 45 minutes – even while the child screamed, “I’ve been good,” prosecutors and investigators said.

A police affidavit obtained by The Associated Press described how Towne “stated she wanted to end (her daughter’s) life because she was an evil child and did not want to deal with her anymore.”

But after Tuesday’s court hearing, court-appointed attorney James Stafford said Towne had been admitted to a mental institution at least nine times, and was diagnosed with schizophrenia, The Associated Press reported. 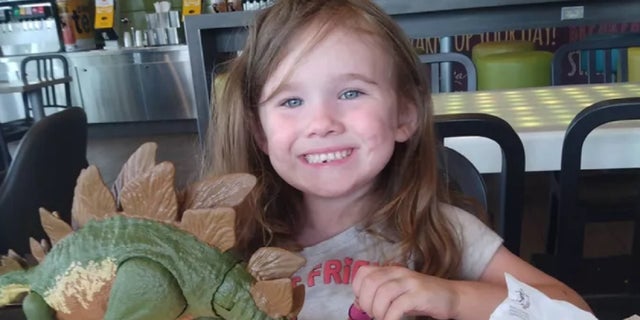 Melissa White Towne is accused of stabbing and strangling her 5-year-old daughter, Nichole, on Oct. 16, 2022. (GoFundMe)

On Monday, Harris County Sheriff Ed Gonzalez revealed that Towne drove to a local hospital’s emergency room, where staff discovered her daughter inside the Jeep SUV “partially wrapped in plastic and mesh bags.”

Gonzalez said Nichole had signs of a laceration and “possible ligature marks” on her neck, and was pronounced dead at the hospital.

“Towne admitted to killing her daughter,” he said.

A spokesperson for Child Protective Services told The Associated Press the agency has a history with Towne, but would not elaborate. The spokesperson said Towne has three more children who are between the ages of 2 and 18, and who had been staying with family members.

A GoFundMe page has been created to benefit Nichole’s family.

The Associated Press contributed to this report

Stephanie Pagones is a Digital Reporter for FOX Business and Fox News. Story tips can be sent to stephanie.pagones@fox.com and on Twitter: @steph_pagones.