‘The View’ draws disgust for dressing kid up as Trump toilet stuffed with documents for Halloween: ‘Deranged’

The Halloween special of “The View” was full of political statements, from co-host Whoopi Goldberg donned as a “handmaid,” to a child dressed up as former president Donald Trump in the form of a document-stuffed toilet.

Goldberg earned a standing ovation from the audience for entering the studio in a red robe and white bonnet as a character from “The Handmaid’s Tale” to start the show. Her robe read, “my body, my morals, my life, my choice, not yours,” on the back. But the show wasn’t done with attention-hogging costumes.

Halfway through the show, kids came onto the stage in their costumes picked out by “The View.” Two were intended to poke fun at Republicans.

The first child was dressed as former President Trump as a toilet, flushing classified documents. He was accompanied by two other kids dressed as FBI agents.

One child dressed as Donald Trump flushing documents down a toilet.

The show’s wardrobe producer made clear it was a reference to the FBI raid on the former president’s Mar-a-Lago home in August.

The costume prompted uproarious laughter from the hosts. “Oh, I love that,” one host said.

Another child came out dressed as Pennsylvania Sen. candidate Dr. Mehmet Oz in scrubs holding vegetables. The show mocked the Republican candidate lamenting the rising cost of groceries due to inflation in a video for social media. 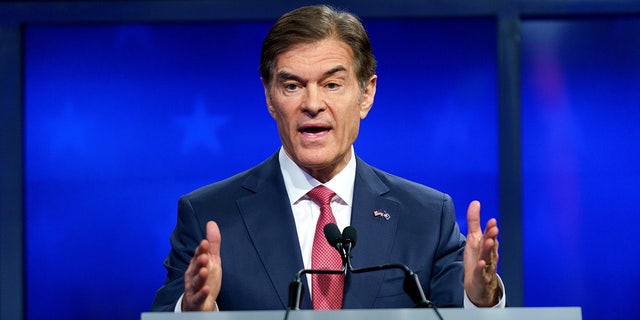 The show seemed to make light of the 40-year-high inflation rate again with another costume.

“Now, unfortunately the economy is definitely on everybody’s mind so that’s why we created this next costume. Here we have our take, we have car dealership inflatable green guy,” the wardrobe producer said.

Other costumes included an Oscar statue with a slap mark, in reference to actor Will Smith slapping comedian Chris Rock at the awards show earlier this year.

The Trump costume drew backlash from conservatives on social media.