Tom Brady reached another career milestone in Week 18, but it’s not one he wants to be remembered for.

For the first time in his 23-year career, Brady finished the regular season with a losing record as the Tampa Bay Buccaneers fell to the Atlanta Falcons, 30-17, on Sunday.

The Buccaneers finished the season 8-9, which is Brady’s worst mark as a starting quarterback since the 2002 season when the New England Patriots went 9-7.

Tom Brady #12 of the Tampa Bay Buccaneers drops back to pass against the Atlanta Falcons during the first half at Mercedes-Benz Stadium on January 8, 2023 in Atlanta, Georgia. (Cooper Neill/Getty Images)

When you think about it, the fact that it took this long for a Brady-led team to have a losing record is quite impressive. And Tampa is still heading to the playoffs after winning the AFC South last week despite their record.

Brady didn’t play much in this contest anyway as the Buccaneers were cautious with their starters. Some wondered whether Brady would play at all given that their No. 4 seed was already locked in for next week’s wild-card matchup.

Brady got the first five Bucs drives before he was taken out of the game, and he started the game with a solid touchdown drive that ended with an 8-yard pass to tight end Kyle Rudolph to go up 7-0.

The only other scoring drive came on a 14-play, 52-yard methodic move down the field that ended with a Ryan Succop field goal to tie the game at 10 apiece.

Brady finished the game 13 of 17 for 84 yards with his one touchdown, and he will focus on facing the No. 5 seed, which will either be the Philadelphia Eagles or Dallas Cowboys. 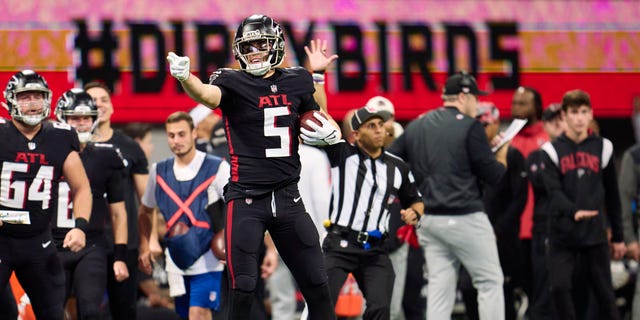 Drake London #5 of the Atlanta Falcons celebrates after a play against the Tampa Bay Buccaneers during the second half at Mercedes-Benz Stadium on January 8, 2023 in Atlanta, Georgia. (Cooper Neill/Getty Images)

Blaine Gabbert took over for Brady and orchestrated a five-play touchdown drive after the Bucs secured a strip-sack fumble on rookie quarterback Desmond Ridder. Gabbert found Russell Gage Jr. for three yards to go up 17-10.

But that’s the only points Tampa would be able to get as they were scoreless in the second half while the Falcons got to work.

Ridder was able to find MyCole Pruitt in the first quarter for six points but wasn’t able to sustain a drive until the second half began. He went nine plays for 69 yards that ended with a Younghoe Koo field goal, and after a three-and-out by the Bucs, Ridder had an impressive 14-play drive that saw a touchdown to Olamide Zaccheaus to take the lead.

The Falcons would score on all second-half drives before running out the clock at the end of the fourth quarter. Cordarrelle Patterson found the end zone on a 2-yard run after the Zaccheaus touchdown, and Koo added a 51-yard field goal to make it 30-17. 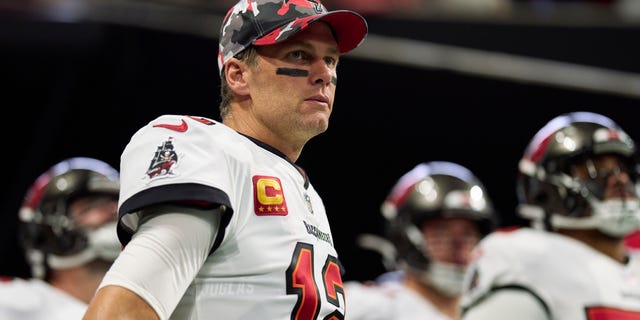 Tom Brady #12 of the Tampa Bay Buccaneers takes the field before kickoff against the Atlanta Falcons at Mercedes-Benz Stadium on January 8, 2023 in Atlanta, Georgia. (Cooper Neill/Getty Images)

Ridder finished his final game of his rookie season 19 of 30 for 224 yards with two touchdowns. Rookie running back Tyler Allgeier had 135 rushing yards on 24 carries. Drake London also surpassed 100.